Elizabeth Azzuz had already worked with fire three times during the week I spoke with her from her home at the confluence of the Klamath and Trinity Rivers in Northern California. Azzuz is a member of the Yurok Tribe, which has used fire for cultural and ecological reasons for hundreds of generations. She burns dense understory to cleanse conifer forests and promote the growth of hazel for basket weaving. At night, she ignites leaf litter and grasses; the resulting smoke discourages weevils and moths, which can infest the acorns used in traditional foods.

Azzuz’s grandfather introduced her to fire when she was only 4 years old. “He taught me what fire means to us, how important fire is to everything that lives here,” she said. And he taught her how to work with fire in ways that were safe, ecologically responsible, and respectful to Yurok cultural traditions. Now, she’s used fire for more than 50 years to encourage the growth of the plants used for traditional weaving and the production of certain traditional foods, as well as to open meadows for elk and deer habitat.

But colonization has made this work more difficult. For over a century, federal policies in the western U.S. prioritized suppression — immediately extinguishing all fires — to keep homes, communities and commodities, such as timber, safe. The government’s single-minded policies robbed local indigenous people of the tradition of culturally rooted burning, and also deprived many forests of a natural cleaning mechanism. Fire practitioners — both tribal members like Azzuz and scientific researchers — argue that today’s destructive wildfires are a direct product of a relationship with fire that is out of balance. 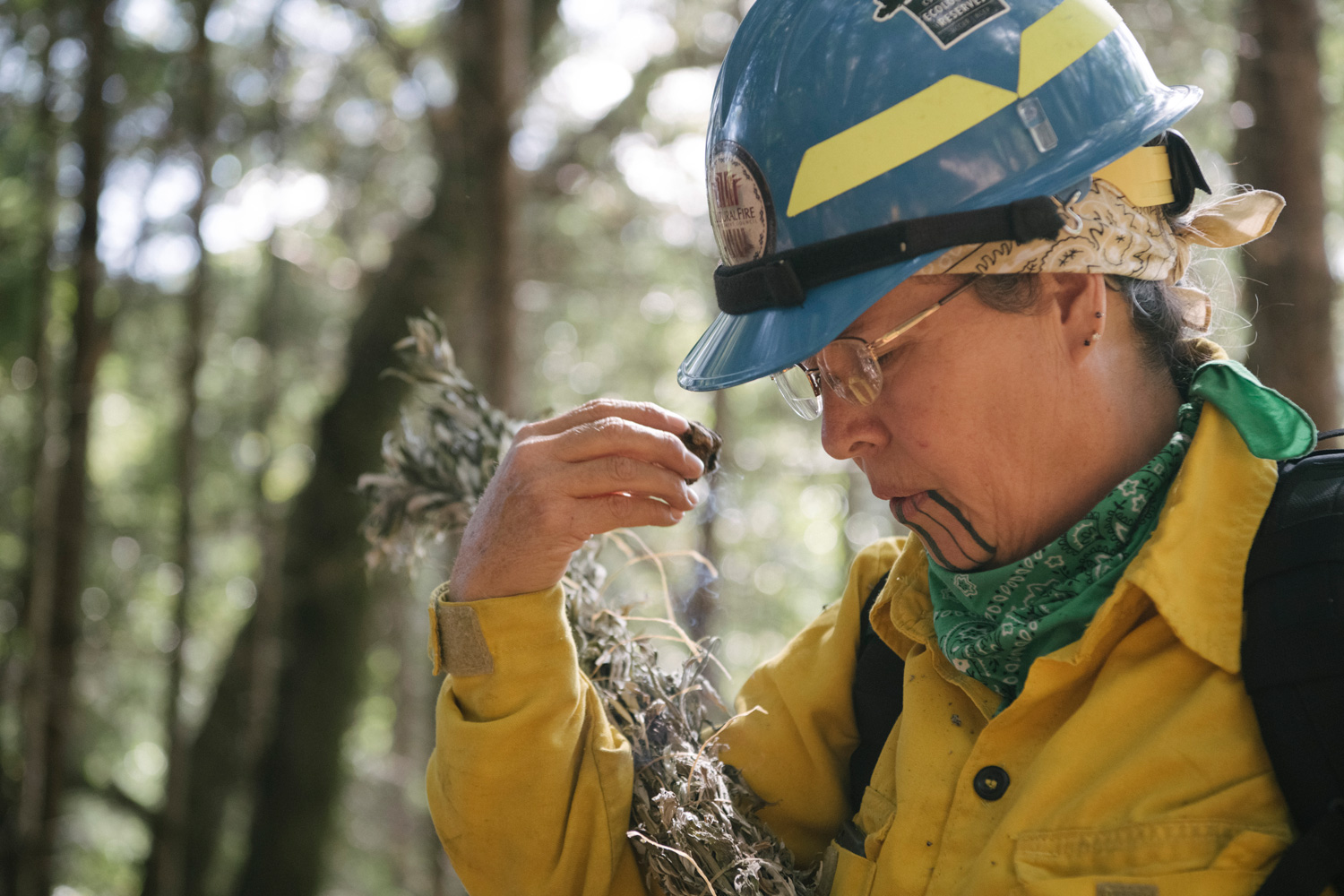 During a Yurok-led TREX training burn, Elizabeth Azzuz blows on an ember of angelica root, which will be used to light the burn near Weitchpec, California. Kiliii Yüyan

Innovative programs like the Indigenous Peoples Burning Network, a federally funded program carried out in partnership with The Nature Conservancy, attempt to restore that balance by bringing together formally trained burn bosses and indigenous fire practitioners. They work and learn side-by-side, determined to return good fire to landscapes and cultures that are starved of it.

“We have a shared problem, and clashing systems,” said Mary Huffman, director of the Indigenous Peoples Burning Network. Modern regulatory systems like the National Wildfire Coordinating Group — a group consisting largely of federal agencies that establishes a national set of training, qualification and equipment standards — are designed to save human life and property, not for using fire proactively. They dictate burn windows and follow protocols that do not align with traditional values or practices. Many indigenous fire practitioners have chosen not to become fully authorized burn bosses — people who have the qualifications required to burn under some Western regulatory systems.

Without authorized burn bosses and extensive firefighting equipment, such as fire engines, indigenous communities have been restricted in their use of fire. This is where the Indigenous Peoples Burning Network and its sister networks — the Fire Learning Network, Prescribed Fire Training Exchanges (TREX), and Fire Adapted Communities Learning Network — come in.

“The Network supports indigenous communities that bridge these two systems and create pathways for the revitalization of traditional fire cultures,” Huffman said. “Since wildfires are increasing under influence of climate change, the dominant fire system is being strained, and it is more important than ever to have multiple voices participate in problem-solving.” That includes the voices of people like Azzuz and Bill Tripp, a member of the Karuk Tribe and leader in the Indigenous Peoples Burning Network.

Both work with fire in their respective tribes. Azzuz, a board member of the Cultural Fire Management Council, a nonprofit community organization, is dedicated to facilitating cultural burning on the Yurok Reservation and surrounding ancestral lands.

“Fire provides open meadows so kids can run and play, so elk can move through historic corridors, and to make room for the hazel we use to weave baskets that our women are renowned for,” Azzuz said. “Without those things, we are just another lost people.”

As deputy director of the Karuk Tribe’s Department of Natural Resources, Tripp works to bring back cultural resource-management practices, including planned burning. These days, Tripp spends less time working with fire in a hands-on way. Instead, he helps craft policies and plans — such as the tribe’s recently released climate adaptation plan — that advance tribal capacity for prescribed burns as well as for fire suppression that respects cultural values.

But he still finds time to burn near his home. “It’s one of the things that keeps me grounded in a high-stress world,” Tripp said. He uses fire to thin brush, grass, pine needle and leaf litter, and to boost berry production and traditional foods.

Tripp and Azzuz work with other seasoned fire practitioners to lead Prescribed Fire Training Exchanges (TREX) in Northern California. One of the primary goals is to encourage collaborative problem-solving in a modern fire age, said Jeremy Bailey, who manages the program and coordinates training around the world.

The decision to light prescribed fires is a weighty one that brings fire practitioners together, even though their systems and reasons for burning sometimes divide them. And the crunch of time is a driving force: Research shows that the amount of prescribed fire needed to truly mitigate the risk of dangerous wildfires — and to restore cultural fire practices — far outpaces the amount of acreage being burned.

“We all need to get this done together, before we don’t have a place to live,” Azzuz said. “No one is going to heal this world alone.”

When it comes to addressing the threat from today’s catastrophic wildfires, fire practitioners across the board agree that planned fires are one of our sharpest tools. By working with fire proactively and in thoughtful, measured ways, humans can re-establish the balance that fire provided cultures and ecosystems in the past, even as we create another kind of balance for the future.

“We’ve been suppressing fire and really, what we’ve been doing is suppressing this critical piece of who we are as humans,” Azzuz said. “Fire isn’t something apart from us. Fire is family.”