As of today, this March 17 tweet, which referred to the drop in air and water pollution during the global COVID-19 pandemic, has received nearly 300,000 likes and more than 70,000 retweets — as well as condemnation from some users.

“The problem is not people,” replied one user. “That’s some ecofash shit that leads to genocide.” 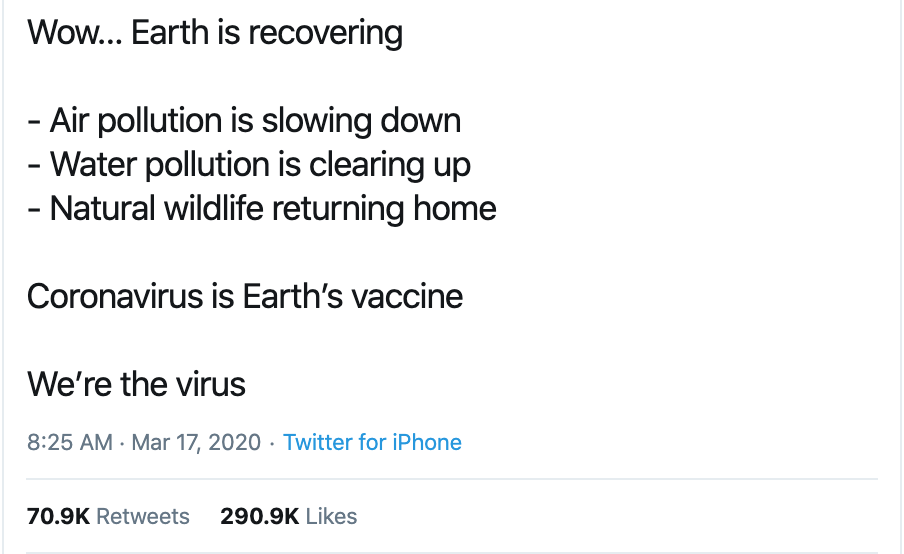 “Ecofash” refers to ecofascism, the promotion of authoritarian, facist ideologies for environmental good. Minimizing or even encouraging human death and suffering so long as it helps the environment is an excellent example of the dark ideology — and yet variations on the coronavirus-is-good-for-the-climate theme have been cropping up more and more as the virus spreads.

It’s true that carbon emissions and air pollution have plummeted since the onset of the global crisis. Widely shared (but mostly fake) stories about wild animals returning to urban settings while humans are hunkered indoors have abounded. Although most environmentalists have been clear that the societal tragedy of the novel coronavirus vastly outweighs any marginal environmental benefits, a handful of proclamations that “the planet is better off now” and that “we” humans are bad news for the planet have gone viral. 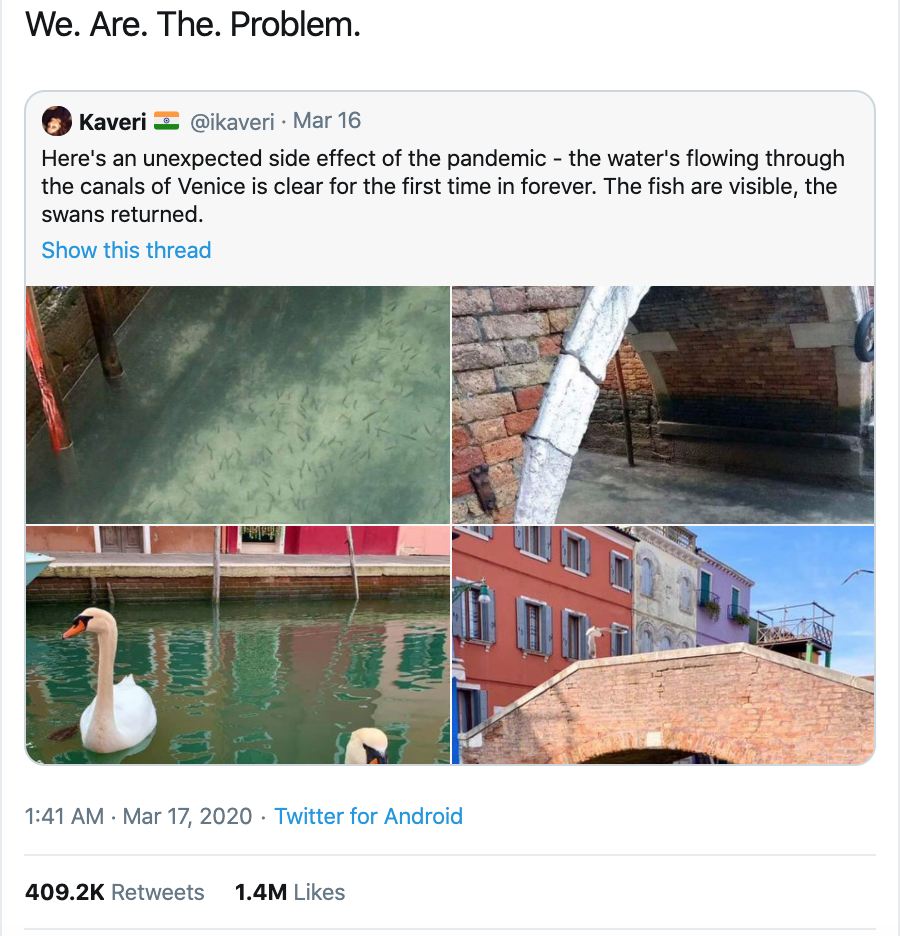 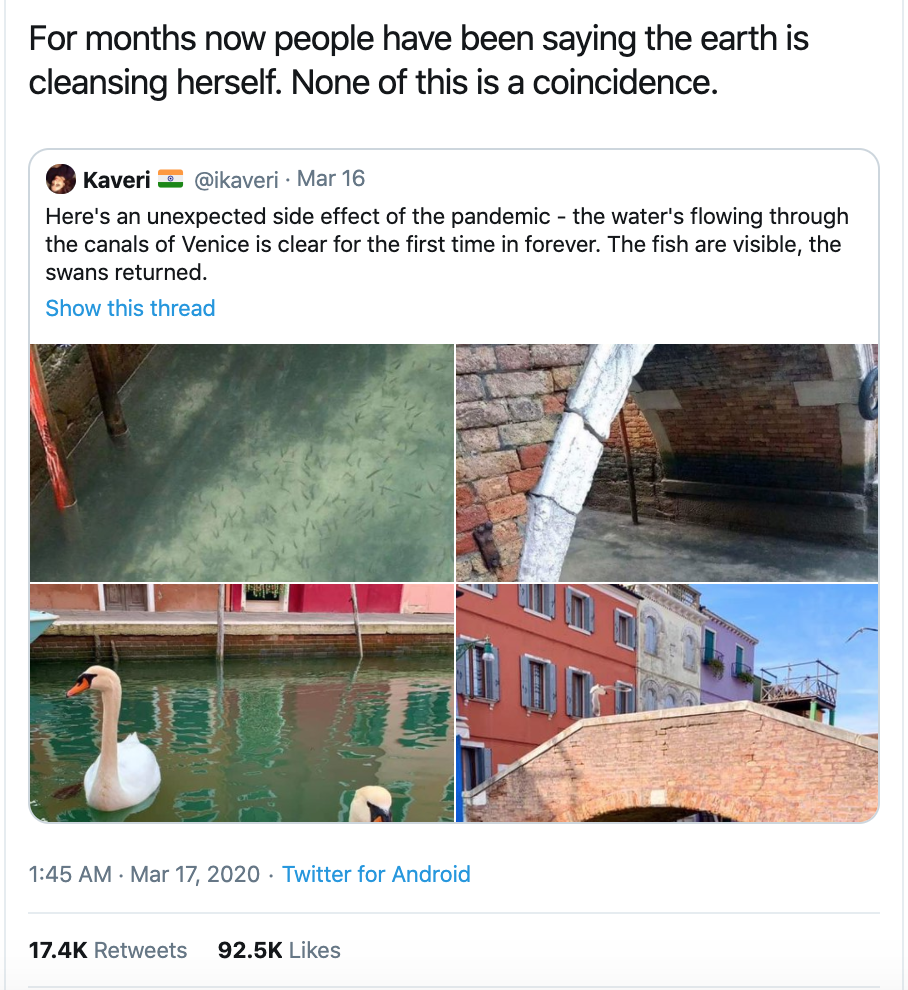 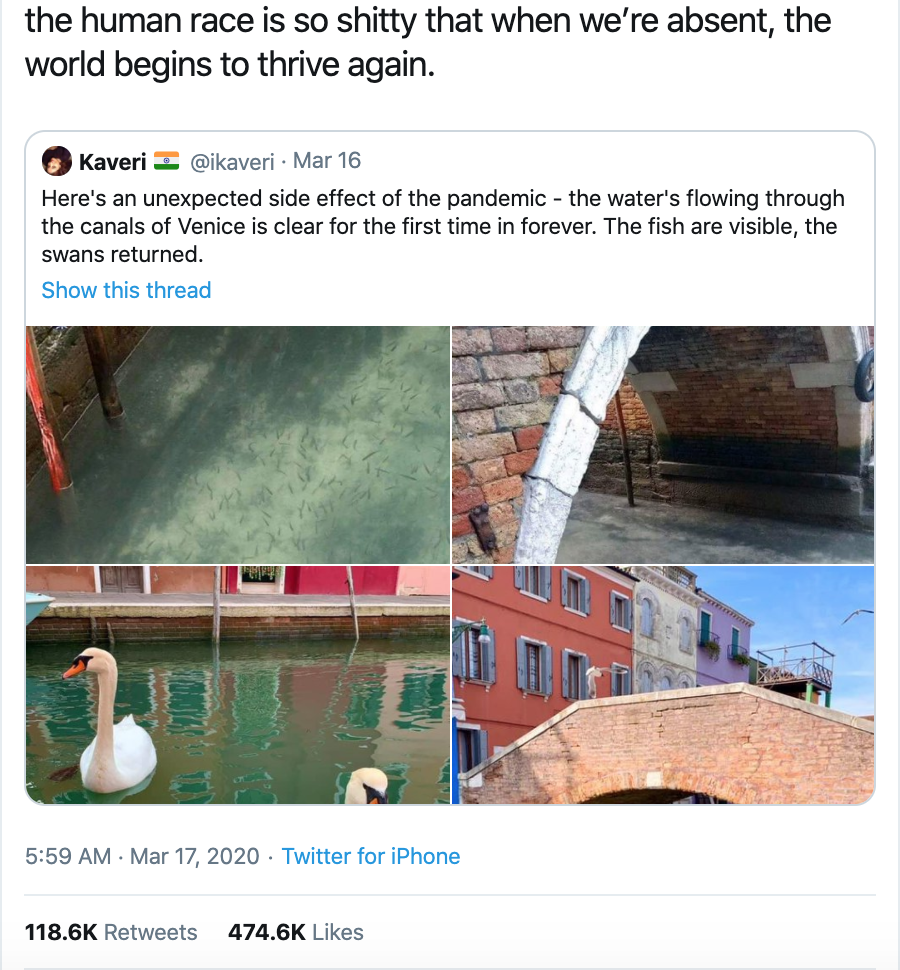 This stance has some serious flaws, like its disregard of the disproportionate impact different people and societies have on the environment, and its questionable assumption that human society and “the planet” are somehow discrete and utterly separate actors. But the most disturbing facet of this argument is how it echoes strains of the environmentalist movement that have advocated for reducing nonwhite, non-Western populations.

In the United States in the 1960s and ‘70s, fighting overpopulation for the sake of conserving Earth’s resources became a mainstream preoccupation — never mind that the “overpopulated” African and Asian countries consumed fractions of what the U.S. did. Paul Ehrlich’s landmark 1968 book The Population Bomb brought discussions of human population control into the spotlight with its dire warning of mass starvation within decades as people overwhelmed the earth’s resources. He recommended sterilization as part of a solution. Garrett Hardin, another influential environmentalist, lobbied against food aid during famines by arguing that if poorer governments couldn’t feed their people it behooved the planet as a whole to let them starve and die.

These perspectives are perhaps unsurprising given the history of the U.S. conservation movement. Environmentalism has long danced with xenophobia and eugenics: A litany of landmark early 20th century conservationists were also eugenicists, and they passed and promoted influential laws protecting racial purity as well as the environment. Under Teddy Roosevelt, the 1909 National Conservation Commission report declared, “The problem of the conservation of our natural resources is … above all, the conservation of the racial stock itself.”

Broad calls for limiting population, or rejoicing in the pollution-stunting effects of the world’s economy grinding to a halt, are indirect endorsements of mass suffering for people who are already most vulnerable — and incidentally, those who contribute least to climate change. Blind applause for environmental progress without acknowledging who’s bearing the cost is simply a rebranding of white supremacist ideals. And as with most disasters, the effects of the novel coronavirus won’t be distributed equally. Experts say that older, sicker, and poorer people will disproportionately suffer and die from COVID-19 and its economic impacts.

But proponents of the unsettling assertions that humans are a scourge or that the pandemic is healing the earth genuinely don’t seem to see these implications. When other Twitter users accused the authors of the viral tweets of paying lip service to ecofascism with their ostensibly pro-environmental tweets, the tweet-crafters protested.

“My intention was [to] show that there’s some positive in this incredibly bad and dark situation,” clarified the author of the “We’re the virus” tweet. “I am NOT saying all humans should die.” Most of the people liking, retweeting, and amplifying the original message would likely agree. The takeaway from the rash of cavalier, almost celebratory COVID-19 interpretations gaining traction should not be that ecofascists and eugenicists dominate the environmental Twittersphere. The far more insidious (and uncomfortable) truth is that disturbing philosophies on humanity have always coexisted with environmental thinking — and are bound to resurface if others don’t call out the inherent injustice of these perspectives.