What crisis? The Republican National Convention totally ignored the climate. 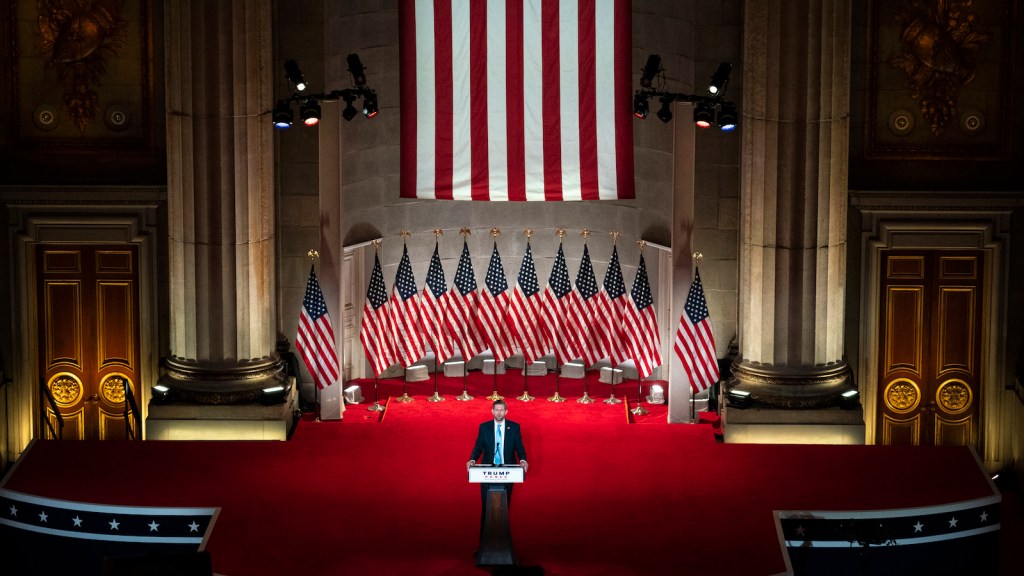 What crisis? The Republican National Convention totally ignored the climate.

The Republican National Convention, dominated by veneration of Donald Trump and bleak warnings of the dangers of socialism, completely ignored the climate crisis, an omission that has disturbed some conservatives who warn the party risks being left behind by voters.

Convention speeches included Eric Trump praising the beauty of the Grand Canyon, around which his father’s administration has proposed opening to mining for uranium, while several speakers attacked Joe Biden, the Democratic presidential nominee, as a threat to oil and gas workers’ jobs.

But Trump’s renomination event didn’t lay out any plan for the climate crisis, nor even any acknowledgment of it. “It is disappointing,” said Danielle Butcher, chief operating officer of the American Conservation Coalition, an organization of young conservatives. “To see no mention of climate change at the RNC, no update in the official platform? It feels unrepresentative of science [and] of the progress we have made as a party.”

Butcher said the Republican Party’s base has shifted to become more concerned by the climate crisis, with young conservatives placing particular importance on the issue. “Trump may not be on board yet, but there is movement, and we’d love for him to join us,” she said.

The convention took place to a jarring news backdrop of hundreds of wildfires torching California, burning an area the size of Rhode Island and forcing tens of thousands of people to evacuate while shrouding millions more in harmful smoke. Meanwhile, Hurricane Laura hit Louisiana on Thursday as a Category 4 hurricane, one of the most powerful storms in U.S. history.

Climate scientists have found that hot, dry conditions caused by climate change are helping fuel wildfire conditions, with global heating doubling the area burned in the western U.S. since the 1980s. Similarly, rising ocean temperatures are aiding the formation of more powerful hurricanes in the Atlantic.

The severity of such disasters — along with record heatwaves that have baked regions from the Arctic to Death Valley, increasingly dire scientific reports, and a roiling youth protest movement — have helped spur growing alarm among voters over the climate crisis. Pollsters have been surprised to find that concern over climate has remained robust even as the Covid-19 pandemic emerged as an immediate, deadly threat to Americans.

Over the past decade, climate has become a deeply divisive issue between Democrats and Republicans, but polls have shown moderate and independent voters increasingly accept the science of climate change and want action, while there is now solid support for regulating carbon dioxide even among Republican voters.

Some Republicans fret this growing bloc of voters is being surrendered to the Democrats, with Biden’s $2 trillion plan to cut greenhouse gas emissions contrasting sharply with Trump, who has long disparaged climate science and overseen the rollback of dozens of climate and other environmental protections.

“There’s a fear in the party of contradicting Trump, but there will be a reappraisal at some point because we won’t be able win without talking about climate. Trump may be able to eke out an electoral college victory this time, but that won’t happen again with four more years of demographic change.”

In January, Kevin McCarthy, the minority House leader from California who has warned of the dangers of Republican irrelevancy on climate, unveiled a plan to help capture carbon dioxide emissions from coal-fired power plants and an effort to plant billions more trees to suck CO2 from the air. The plan failed to get resounding support from other Republicans, however, and was derided by environmentalists as woefully insufficient for the massive emissions cuts needed to avoid disastrous climate change.

“People are coming round to this but we don’t have the luxury of time,” Inglis said. “We are seeing the whites of climate change’s eyes as it is charging at us and we have to take a shot. The greatest consequence isn’t lost elections, it’s that real people are going to be hurt.”