Climate activists make noise in Philly ahead of Democratic convention 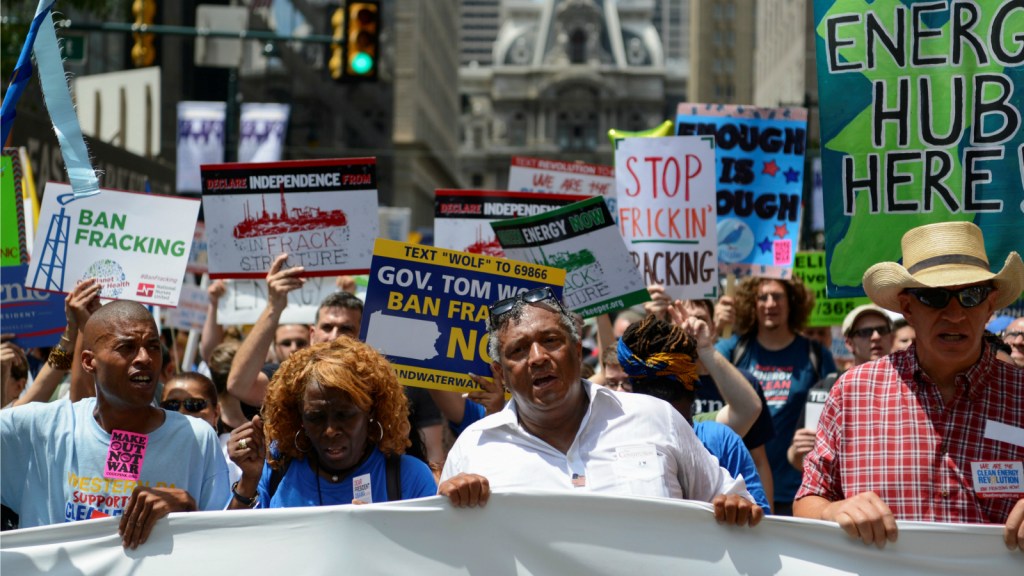 Climate activists make noise in Philly ahead of Democratic convention

PHILADELPHIA — While the Democratic Party was prepping its convention hall on Sunday, environmental activists tried to draw attention to the streets and their ongoing war against fossil fuel extraction. The day before the Democratic National Convention kicks off here, several thousand activists from Pennsylvania and surrounding states endured sweltering heat and humidity for nearly four hours to call for a shift to renewable energy.

They gathered in front of Philadelphia’s City Hall, an enormous baroque revival stone building, for a press conference and an interfaith ceremony. They then marched down Market Street, one of Philly’s main thoroughfares, and congregated in the plaza in front of Independence Hall, where the Declaration of Independence was signed.

The March for a Clean Energy Revolution was primarily sponsored by Food and Water Watch, an advocacy group that focuses heavily on the local impacts of fossil fuel extraction and strongly opposes fracking. Participating organizations included anti-fracking groups from Pennsylvania and New York, local chapters of national climate change and environmental organizations such as 350.org, Native American tribes, and social and environmental justice groups.

Consequently, the speakers, chants, signs, and banners concentrated mainly on fossil fuel extraction and its direct effects, less so on the long-term, dispersed effects of climate change, like sea-level rise. And so when it came to policy solutions, there was a lot more “keep it in the ground” than “tax carbon,” although there were a few signs and references to carbon pricing. Typical signs said, “Ban fracking,” “Don’t frack with our water,” “Stop the pipelines,” and “No refinery in our city.”

There was also a heavy focus on environmental justice, since the effects of fossil fuel extraction and processing disproportionately burden low-income neighborhoods and communities of color. Marchers chanted, “What do we want? Climate justice! When do we want it? Now!”

Higher rates of asthma and other respiratory illness, for example, plague communities near oil and gas wells, refineries, and other infrastructure. “When we fight for climate justice, we fight for public health justice,” noted Martha Kuhl, secretary-treasurer of National Nurses United, a registered nurses union and one of the cosponsoring organizations, in a speech.

“Over one quarter of children in Philadelphia have asthma, primarily in lower-income communities of color,” Teresa Hill, an activist with ACTION United, a Pennsylvania-focused low-income rights advocacy group. “We have the right to breathe, but corporations like the Philadelphia Energy Solutions oil refinery are poisoning us. We need our elected officials like Gov. Wolf to stand up to the dirty energy industry and say no to expansion of oil and gas at the Southport site in Philadelphia.” Other speakers called on Gov. Tom Wolf, a Democrat and the honorary co-chair of the Democratic National Convention, to ban fracking in Pennsylvania.

While talk of the election was mostly muted, at the rally after the march, Chief Dwaine Perry of the Ramapough Lunaape Nation warned the crowd that his tribe is among the many Americans who have been screwed over by Donald Trump, and that as president Trump would do to the whole country what he did to the Ramapough. (Starting in the ‘90s, Trump lobbied against and crudely attacked the Ramapough effort to gain federal tribal recognition, because if they could open a casino in New Jersey it might drain business from his Atlantic City casinos. The Ramapough still have not gotten federal recognition.)

Some speakers and attendees expressed total dismay with politicians of all stripes, but most seemed to think that the Democratic Party is exhibiting hopeful signs or the potential for positive change. “We’re here to tell the Democratic Party to listen to their base,” Wenonah Hauter, executive director of Food and Water Watch, told Grist.

The divisions within that base — and the difficulty in appealing to climate hawks who fall outside of it — were also evident, however. There were contingents from groups like Socialist Alternative, a left-wing advocacy organization that believes “the Republicans and Democrats are both parties of big business.” A tick to their right were the legions of Bernie Sanders dead-enders still sporting signs for the lost cause.

An optimist, though, would see in this an encouraging prospect of broader climate revolution. “This is representative of people coming together without a big sponsoring organization or a lot of money,” Nigel Savage, president of Hazon, a Jewish organization that promotes sustainability, told Grist during the interfaith ceremony. “It’s the fragmentation of American politics, in a healthy way. You’ve got religious and grassroots groups saying, ‘this is what we want,’ outside of the party structure. A rabbi giving way to an imam, and then a Native American faith leader. It’s reflective of the political moment in this country.”