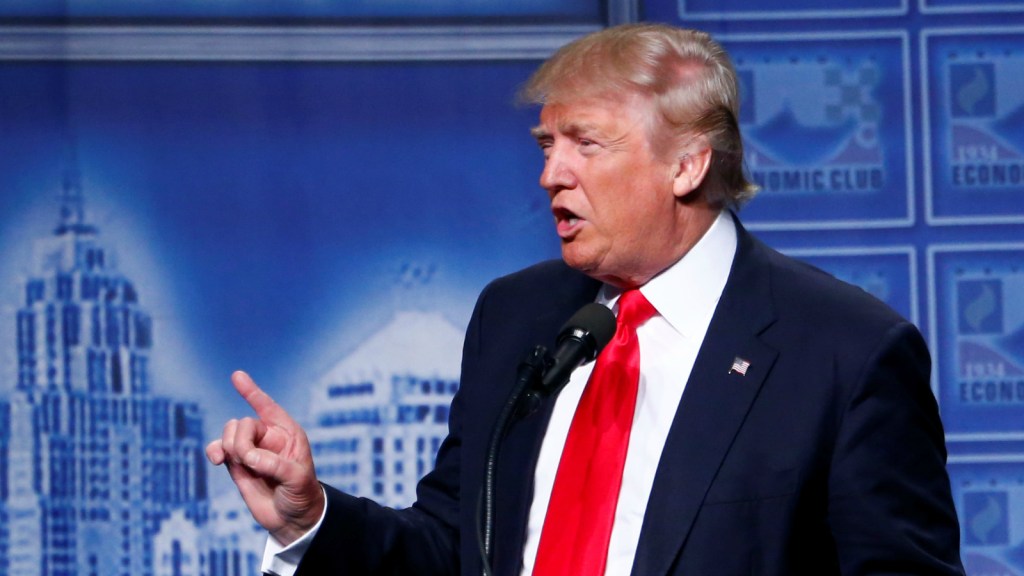 Donald Trump went to Detroit on Monday, using the notoriously blighted city as a backdrop for a major economic policy speech. He built his narrative arc around Detroit’s rise and fall, claiming that his agenda would bring back manufacturing jobs and thereby revitalize “cities like Detroit.”

“When we were governed by an America First policy, Detroit was booming,” Trump said. “When we abandoned the policy of America First, we started rebuilding other countries instead of our own. … The factories and neighborhoods crumbled in Detroit. … The city of Detroit is the living, breathing example of my opponent’s failed economic agenda.”

The bulk of Trump’s proposals are just standard conservative Republican trickle-down economics. Trump wants huge tax cuts for the rich, far fewer regulations, elimination of estate taxes, and lower corporate taxes. Insofar as this program could be tied to any theory of industrial renewal, it would be the belief that taxes and regulations are choking off investment and expansion in the manufacturing industry. But there is no evidence to support this. U.S. manufacturing employment has been declining since the mid-1970s. Ronald Reagan and George W. Bush both cut taxes substantially — including taxes on high incomes and large estates. Manufacturing employment did not boom as a result, nor did Detroit.

Moreover, cutting taxes for the rich and cutting spending on the poor would redistribute money away from a high-poverty, low-income city such as Detroit and toward the wealthy. If you think Detroit is badly off now, just wait to see what it looks like after Trump’s tax cuts have led to cuts in programs like food stamps, Section 8 housing vouchers, environmental remediation, and Medicaid.

In his speech on Monday, Trump also reiterated his intention to clear the way for more fossil fuel extraction. This would have some short-term economic benefits for a few specific rural areas, such as North Dakota. But there is no reason to think it would do anything for cities like Detroit. Trump implies that cheaper energy would boost manufacturing, but oil and natural gas prices are already low and that has not led to a rebound of factory work in big post-industrial cities.

The one component of Trump’s agenda that breaks from Republican economic orthodoxy is his opposition to free trade agreements, such as the Trans-Pacific Partnership. Trump argues that these kinds of deals have led to Detroit’s decline, and that reversing free trade will reverse Detroit’s fortunes.

Detroit vs. the suburbs

A bigger problem for Detroit than declining manufacturing employment is the shifting of people and economic power to the suburbs. While the city’s population has shrunk by two-thirds since its height in the 1950s, many of its suburbs are booming. Even most of the jobs that still exist in the city — 73 percent — are held by people who live in the suburbs.

The media and politicians like Trump have a tendency to conflate “Detroit” with the auto industry. But as Brad Plumer wrote in The Washington Post in 2013, “The fortunes of Detroit the city are no longer tied up with the fortunes of the Big Three automakers. … starting in 1950, automakers began moving more and more of their operations further away. They looked for space in Detroit’s suburbs and exurbs to build bigger plants as they began automating operations. Most of the Big Three’s main operations remain outside city limits.” Today, there are only two car-building plants left in Detroit proper, employing fewer than 10,000 people.

So even if Trump’s policies boosted domestic auto manufacturing, the increase in jobs would be fairly marginal because of mechanization, most of the new jobs wouldn’t be in Detroit, and most of the ones that were in Detroit would likely be filled by suburbanites.

In fact, cars are a big cause of Detroit’s problems, not a solution. General Motors shut down Detroit’s streetcar system and retrofitted the city for driving. Detroit’s mass transit ridership has dropped 90 percent in the last 80 years, and it is the largest city in the country without any rail system. Now that walking and transit are back in fashion, those factors make it harder to revive Detroit by appealing to creative class professionals. What’s the point of city living if you have to drive everywhere anyway?

What would help Detroit now is not misplaced nostalgia for a labor-intensive manufacturing economy that isn’t coming back to the U.S. at all, much less to its inner cities. Rather, all struggling American cities would benefit from a concerted federal effort to shift resources toward them instead of subsidizing suburban sprawl. That means removing sprawl subsidies from the tax code, investing in mass transit and affordable housing, increasing block grants for neighborhood revitalization, and taxing excessive gas consumption. Hopefully, Trump will return to Detroit soon to make a big speech about that.