Last month, when global elites gathered in Davos, Switzerland for the World Economic Forum, climate change took center stage. While it’s unclear whether attendees came away with any concrete plans to tackle the crisis — other than planting 1 trillion trees — rumors emerged that oil and gas executives discussed  an issue at the heart of the climate fight: scope 3 emissions.

Now, all eyes are on BP and its new CEO, Bernard Looney, who is expected to announce ambitious new climate goals for the company that include scope 3 emissions targets in his first major address on Wednesday afternoon. (Update: BP announced the details of its plan Wednesday morning; you can read them here.)

So what’s the big deal with scope 3 — and why have fossil fuel companies been so afraid to touch it?

The whole “scope” framework was introduced in 2001 by the World Resources Institute (WRI) and World Business Council for Sustainable Development as part of their Greenhouse Gas Protocol Corporate Accounting and Reporting Standard. The goal was to create a universal method for companies to measure and report the emissions associated with their business. The three scopes allow companies to differentiate between the emissions they spew directly into the air, which they have the most control over, and the emissions they contribute to indirectly.

Scope 1 emissions are the most direct. If a company is in the business of extraction, like BP, scope 1 includes emissions from methane leaks and gas flaring that occur at the wellhead, as well as emissions from company vehicles.

Several of the major fossil fuel companies have made commitments to reduce their scope 1 and 2 emissions, but that only accounts for about 5 to 10 percent of their total footprint. Few have acknowledged their responsibility for scope 3 — emissions from all of the oil and gas and coal they dig up and sell to people!

According to Nate Aden, a senior fellow at WRI, for a long time companies essentially said, “We just make this stuff, we don’t burn it!”

“It’s like if you had a cigarette manufacturer,” said Aden, “and they’re saying, ‘Well, our production processes are very healthy, no one’s lungs are damaged when we make cigarettes, and the thing that we put out there isn’t hurting anyone. It’s just when these people go and light it on fire … that’s when it damages them. Whoops!’”

By definition, scope 3 emissions include both “upstream” activities, emissions related to products purchased by a company, and “downstream” activities, those related to the products they sell. If you take a step back and look at the big picture, all emissions are scope 1 to someone, so inevitably this kind of accounting creates overlaps between the emissions that different companies are trying to reduce. But Cynthia Cummis, the director of private sector climate mitigation at WRI, sees that as a good thing. “Then there’s pressure to decarbonize the whole value chain. It actually provides an opportunity for collaboration,” she said. 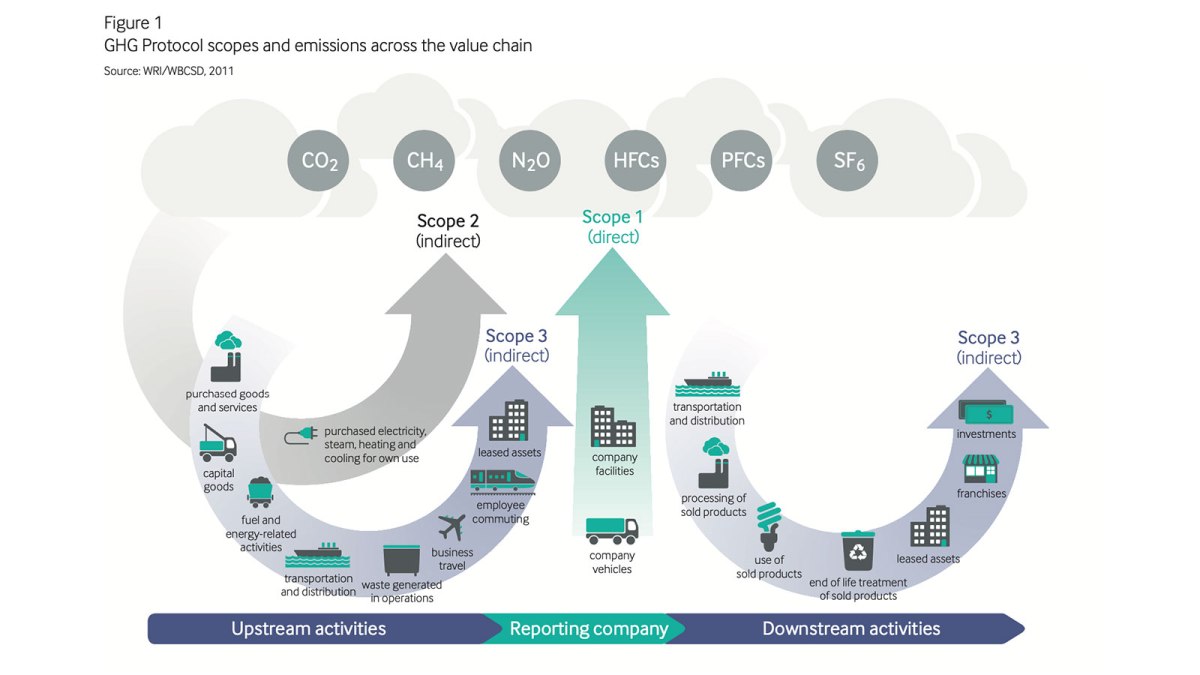 Outside of the oil and gas industry, all kinds of companies have made commitments to scaling back their scope 3 footprint, including Microsoft, PepsiCo, and Target. And a few oil and gas companies have at the very least acknowledged scope 3. Shell, Total, and Equinor for example, include scope 3 emissions in their greenhouse gas accounting disclosures, and have also set targets for reducing the carbon intensity of their energy products.

This strategy is a step above flat-out ignoring scope 3, but it’s also a game of smoke and mirrors. Carbon intensity refers to the amount of CO2 equivalent emitted per unit of energy produced. Burning coal releases a lot more CO2 than burning fracked gas, so one way to reduce carbon intensity would be to shut down all of your coal mines and invest in new fracking wells. Targeting carbon intensity gives companies the freedom to continue unbridled exploration and development of new fossil fuel reserves, as long as they continue to move from “dirtier” fuels to “cleaner” ones. It allows a company’s absolute scope 3 emissions to keep climbing.

“If they want to walk the talk, they need to have absolute scope 3 targets,” said Aden. To date, only one company has set absolute scope 3 targets: Repsol, Spain’s largest oil and gas company, announced late last year that it aims to become a net-zero carbon emitter by 2050. But its plan to get there is fuzzy. For example, the company plans to use carbon capture and storage technology but admits it’s not yet viable at an industrial scale.

Taking responsibility for scope 3 emissions brings up some existential questions for fossil fuel companies. Does setting absolute scope 3 targets mean creating a plan to downsize? Or is it a plan to transition to a business centered around renewable energy? Or could it mean investing in a patchwork of partial solutions, like buying carbon offsets and banking on carbon capture technology?

To Tim Donaghy, a senior research specialist at Greenpeace, there’s only one right answer.

“The key test is whether or not they actually shift their business model and shift their investments into something that’s zero carbon or sustainable,” he said. “Or whether they’re trying to do some sort of offsets, or some other thing to paper over these continued emissions. For us that will be the real test of whether these commitments mean anything.”

Others warn against that kind of thinking. Jonathan Elkind, a senior research scholar at Columbia University’s Center on Global Energy Policy, points out that these companies have a responsibility to their shareholders to stay profitable. “This is not a simple set of decisions,” he said. “Even if you are very critical of what these companies are doing and the pace at which they are moving, there are some legitimately hard questions to figure out.”

But investors and shareholders are starting to put pressure on fossil fuel companies to take serious action that aligns with the goals of the Paris Agreement. Aden suspects that’s why more rumblings about scope 3 came out during the World Economic Forum.

At the same time, Aden remains skeptical that all the hubbub will lead somewhere new. Fossil fuel companies “are very good at talking and getting stories out there,” he said, “but then they’re also very good at continuing the status quo in terms of continuing to increase their production and make money off of the business models they’ve already developed instead of changing.”

Most kids don’t get much schooling on climate change. Could teaching teachers help?