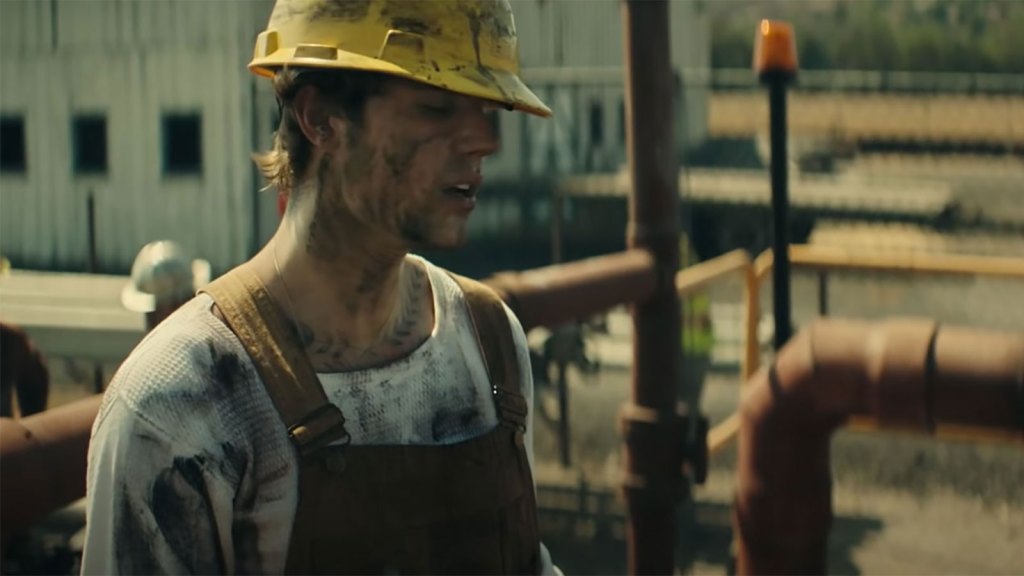 Sometimes, in life, we’re presented with impossible choices, and today we all awoke to this one: Would you rather see Justin Bieber cosplaying as a pipeline worker or cosplaying as Drake?

On Friday at midnight Eastern time, Justin Bieber released the video for his new single “Holy” featuring Chance the Rapper. It is, to be generous, a tooth-achingly saccharine romanticization of “American working-class values” (the kind that many conservatives pretend are the backbone of the political system, instead of corporate executives leisurely pondering which benefits they will strip from employees’ health care plans).

We open on Bieber in bed with his beloved, followed by a sensitive montage of them at their decidedly humble professions: him, toiling over a pipeline, and her, lovingly tending to the elderly in some sort of assisted living facility. They are A Hardworking Couple In Love. But for some reason attributed to the vaguely nefarious “current and ongoing global situation,” per the bumbling manager, Bieber and his team are let go, and the guy that his girlfriend has been taking care of dies and, for some reason, that means she also loses her job?

Things devolve very quickly and suddenly they are two very good-looking homeless people, but wait, here comes an American soldier in uniform driving down the road in a truck to bring this hot, dirty couple to dinner with his family.

Anyway, the song is ostensibly about the resilience of love, and Chance the Rapper is also there.

I can see the appeal of Bieber doing a Hot Oilman thing, at least visually speaking. The irony of course is that the pretty Canadian multimillionaire could not be further removed from the blue-collar worker he’s portraying, so I’m going to assume that the “Holy” video is intended to be a kind of fun, sexy roleplay. Full marks on the Carhartts, though a friend’s review of the video noted that “they went a little heavy on the face dirt.”

Contrast this little bit of make-believe with Bieber’s starring role in the video for “Popstar” by DJ Khaled featuring Drake, in which Bieber appears as a diamond-bedecked Aubrey Graham stand-in, lip-synching the track while surrounded by Lamborghinis and girls in Fashion Nova separates. We are led to believe that this all happens in the slumbering, domesticated Bieber’s head — a fantasy that actually makes sense!

What more do we have in these holed-up times if not our imaginations? But if that’s the case, why devote that energy to decrying the tragedy of laid-off workers specifically in the fossil fuel industry? Yes, unemployment is bad, but offering up salvation by a literal U.S. soldier as the only plausible solution to said tragedy? It’s a bit much, even for a sexy COVID-era dreamscape!

“Popstar” is a better song, anyway.