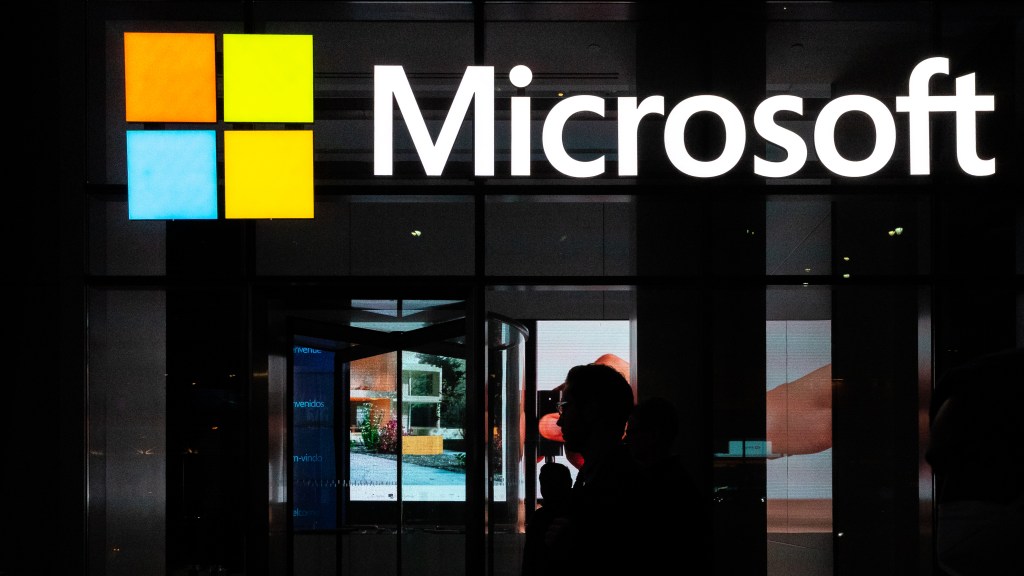 A Microsoft sign is seen in March 2020 in New York City. Jeenah Moon / Getty Images
MICROSOFT UNDER THE MICROSCOPE

Earlier this year, Microsoft announced a bold new climate goal: By 2030, the company aims to be “carbon negative,” meaning it will be pulling more carbon dioxide out of the air than it emits. Awkwardly, the same week that Microsoft made its announcement, it was sponsoring an oil conference in Saudi Arabia. Now, a report published by Greenpeace is giving us our first quantitative indication of how Microsoft’s business with the oil industry could inflate its climate impact and undermine its efforts to achieve carbon negativity.

Published Tuesday, the Greenpeace report explores how the three biggest cloud computing companies — Amazon, Microsoft, and Google — are helping the fossil fuel industry extract, process, and distribute oil and gas more quickly and cheaply, by furnishing the industry with cloud hosting services, custom artificial intelligence software, and machine learning tools. Of the three, Microsoft “appears to have the most” oil-slicked contracts, per Greenpeace. And while much about the partnerships remains opaque, Greenpeace’s report shows that a single collaboration with ExxonMobil has the potential to inflate Microsoft’s yearly carbon footprint by 21 percent.

“The oil and gas industry accounts for billions of dollars in profits for big tech companies, yet the carbon emissions related to these contracts are not reflected in any of the tech companies’ published footprint data,” said Elizabeth Jardim, a senior climate campaigner at Greenpeace and co-author of the report, in a statement.

Indeed, partnerships with the fossil fuel industry to accelerate oil extraction — which Amazon, Microsoft, and Google have all come under fire for in recent years — point to a critical gap in today’s corporate emissions reporting schemes.

When Microsoft announced its plan to go carbon negative in January, it received high praise for focusing on all three “scopes” of emissions laid out in the Greenhouse Gas Protocol, a widely used carbon reporting framework that Microsoft adheres to. Scope 1 and 2 emissions are emissions resulting from the shuttles and buses Microsoft uses to transport its employees around campus and the energy needed to power its data centers. Microsoft’s pledge to bring these emissions down to zero through renewable energy purchases and electric vehicle fleets is standard fare for a woke tech company these days, but Microsoft also committed to eliminating its far more nebulous Scope 3 emissions, which occur up and down the supply chain as products are being manufactured, distributed, and used. Of the 16 million metric tons of carbon Microsoft expects to emit this year, roughly three-quarters are Scope 3.

But while Microsoft is considering everything from employee plane trips to Xbox use in its Scope 3 accounting, notably absent is the climate impact of the software tools it places in the hands of Big Oil. The indirect ways that a company’s products and services change the world are difficult to quantify, and they aren’t a required part of Scope 3 reporting. But they have the potential to be significant: As a recent report by Rystad Energy noted, digitization and automation could save the oil industry up to $100 billion annually this decade — a cost savings that would greatly help it weather the ongoing, coronavirus-exacerbated price collapse.

Greenpeace’s new report gives us a peek at all the carbon Silicon Valley is failing to account for by examining a recent partnership between Microsoft and ExxonMobil subsidiary XTO Energy. As explained on Microsoft’s website, Microsoft is furnishing the oil company with internet-equipped sensors to monitor thousands of remote oil and gas wells in the Permian Basin in Texas and New Mexico, as well as machine learning tools to crunch all of the data coming off these sensors and optimize production accordingly.

In 2019, Microsoft announced that this partnership had the potential to expand oil and gas production “by as much as 50,000 oil-equivalent barrels a day by 2025.” Assuming all of this oil is used, and considering how enhanced Permian Basin production could displace some oil production in other parts of the world, Greenpeace estimates this single partnership could add up to 3.4 million metric tons of carbon to the air a year by 2025. And this is just one of half a dozen oil and gas contracts the new report identifies.

Microsoft’s failure to account for these partnerships is “a major shortcoming, not only in the carbon accounting guidance, but also in Microsoft’s carbon negative goal,” Jardim told Grist in an email. “The emissions created, thanks to Microsoft’s technological solutions, are essentially offloaded from Microsoft’s carbon balance sheet and responsibility.”

“The math behind the climate science is pretty straightforward — we need to keep the majority of fossil fuels in the ground if we hope to prevent dangerous climate change,” said Gary Cook, the global climate campaigns director at Stand.earth, an environmental advocacy group. “Yet tech giants are creating a new lifeline, customizing some of the most powerful computing tools on the planet to help oil companies lock in more exploration, more climate pollution.”

Grist reached out to Microsoft, Amazon, and Google for comment on the report. A Google spokesperson told us the company is no longer building “custom AI/ML algorithms to facilitate upstream extraction in the oil and gas industry,” echoing Greenpeace’s conclusion that Google appears to be winding down these partnerships. An Amazon spokesperson sent us Amazon’s position statement affirming its commitment to keep working with the oil and gas industry.

Microsoft sent Grist a statement reiterating its commitment to becoming carbon negative by 2030, to powering its buildings with 100 percent renewable energy by 2025, and to investing in carbon capture technologies. It also implicitly defended its fossil fuel partnerships.

“The reality is that the world’s energy currently comes from fossil fuels and, as standards of living around the world improve, the world will require even more energy,” the statement reads. “That makes realizing a zero-carbon future one of the most complex transitions in human history.”

It’s true that the world will need more energy in the future. But that energy hardly needs to come from fossil fuels, as Microsoft’s own efforts to run its business on renewable power show. Implying that the world needs more oil plays into the hands of the fossil fuel industry, as does designing new software tools to help find and extract it.

As long as Microsoft keeps doing both, its climate math will have a gaping hole.