Sean Barrett grew up fishing on the rocky shores of Montauk, a village on the eastern edge of Long Island, New York. He’d regularly eat winter flounder and tautog he pulled from the sea that day. To him, grocery-store filets will never compare to the flavor of a fresh catch. He launched Dock to Dish nine years ago to give people around the country the same experience.*

Home cooks and restaurateurs who subscribe to Dock to Dish receive regular deliveries of their local fishery’s catch of the day. Barrett’s mission is threefold: connect consumers to the people who provide their food; support small, sustainable fisheries; and cut the emissions created by shipping fish around the globe. (A lot of the fish at your local market traveled 5,000 miles to get there. Dock to Dish limits deliveries to a 150-mile radius around Montauk.)

Now the 2016 Grist 50 Fixer is rethinking the “fish” part of that mission — or rather, expanding on it. In October, Dock to Dish launched the Eat More Kelp campaign. The company joined ocean-farming nonprofit GreenWave in selling merch, making videos, and enlisting ambassadors (including Fixer and marine biologist Ayana Elizabeth Johnson) to tout the merits of cooking with the nutrient-packed, carbon-capturing superfood.

But that’s just phase one. Barrett and Bren Smith, the brain behind GreenWave, are leading an effort to train and equip fishermen interested in growing kelp. Seventeen farms are set to open off the coast of New York this winter, and people can start signing up for the world’s first “community-supported kelp crop” project that, much like Dock to Dish, funnels money into the new businesses and delivers kelp to adventurous eaters’ doorsteps.

We talked to Barrett about why sustainable fishing and restorative ocean farming are the power couple of climate solutions — and how encouraging fisheries to diversify their products can help them adapt to global warming and survive the pandemic-induced economic fallout. His comments have been edited for length and clarity. 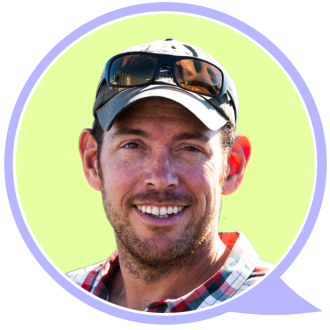 For years now, climate change has been pushing small fisheries to adapt. I often tell people, “You can see climate change in the oceans much more clearly than on land.” The Long Island lobster, for example, has migrated out of the area because the water has warmed. Black sea bass, historically indigenous to North Carolina, has relocated to the mid-Atlantic, overrunning our area and wreaking havoc on the ecosystem. These shifting migration patterns are like standing at the Eiffel Tower and watching a herd of zebras and wildebeests run by. But watermen are used to adapting — working in the wild will teach you that you’re not the boss, nature is.

Last year, Dock to Dish saw the pandemic as an opportunity to put all our muscle into restorative ocean farming and kelp farming, which we’d been working on behind the scenes for awhile. Despite their resilience, small fisheries are still on life support because restaurant closures are wiping out a huge source of revenue. They’ll need even more help as climate change worsens. For a lot of fishers or oyster growers, their season winds down in the fall. But the kelp season starts between December and March. Ocean farming can provide a counterbalance, making for a year-round operation. That’s a huge help to a lot of coastal watermen and commercial fisheries.

Maine has had a pretty robust kelp industry for years because a lot of lobster fishermen have shifted to being kelp farmers, too. We’re targeting oyster farmers to help them do the same. There are hundreds of boutique oyster growers from Maryland to Rhode Island who harvest just one species, making them vulnerable to climate change. We’ve started retrofitting these farms to include kelp. It’s been fun to see these watermen innovating new gear and methods.

Kelp farms also create incredible habitat for smaller crustaceans and other creatures that fish like to eat. So ocean farming doesn’t just give fisherfolk something else to sell — it can boost fish populations, further sustaining their tried-and-true operations.

Bren Smith and I have been friends for a long time, and we used to speak on climate-solutions panels together. He was like, “Ocean vegetables are the answer,” and I was always like, “No, community-supported fisheries and seafood are!” We had to learn that those two solutions are not mutually exclusive. They jive really well together.

Kelp sequesters five times more carbon than land-based plants. It requires no fresh water, no fertilizer. It creates aquatic habitats for smaller species like algae, which fuel entire trophic systems. And the output from one acre of ocean is around eight times higher than what you can grow on one acre of land. That can help the world efficiently feed an ever-growing population.

Kelp absorbs nitrogen, which is much needed in eastern Long Island. Fertilizer from lawns and golf courses has poisoned the ecosystem. Growing up, I would fish and swim in the Hampton Bays. The waterways were full of life. Now they look like the surface of the moon. We’ll be working with marine biologists at nearby Stony Brook University to quantify exactly how much nitrogen and carbon we’re pulling out of the atmosphere and the water. Eat More Kelp is shaping up to be a win-win-win-win-win situation.

The campaign is also supporting a key part of Dock to Dish’s original goal, which is to get people excited about experimenting with new kinds of seafood. Four species dominate the American fish market: salmon, tuna, shrimp, and cod. We’ve always tried to break through the norms and introduce folks to what’s abundant in their area — like the great northern tilefish or the Atlantic chub mackerel. Now we hope to do the same with kelp — and make it the new kale.

I go to bed thinking about this project every night, and it’s the first thing on my mind when I wake up in the morning. Bren Smith says I’m a terrible dinner date because all I ever talk about is kelp. But I can’t help it — it’s all just so exciting!

*An earlier version of this story incorrectly stated when Sean Barrett started Dock to Dish. He founded the company  in 2012. Grist regrets the error.

This artist envisions an intersectional future for the climate movement