Meet the guy who's farming the seas to save them 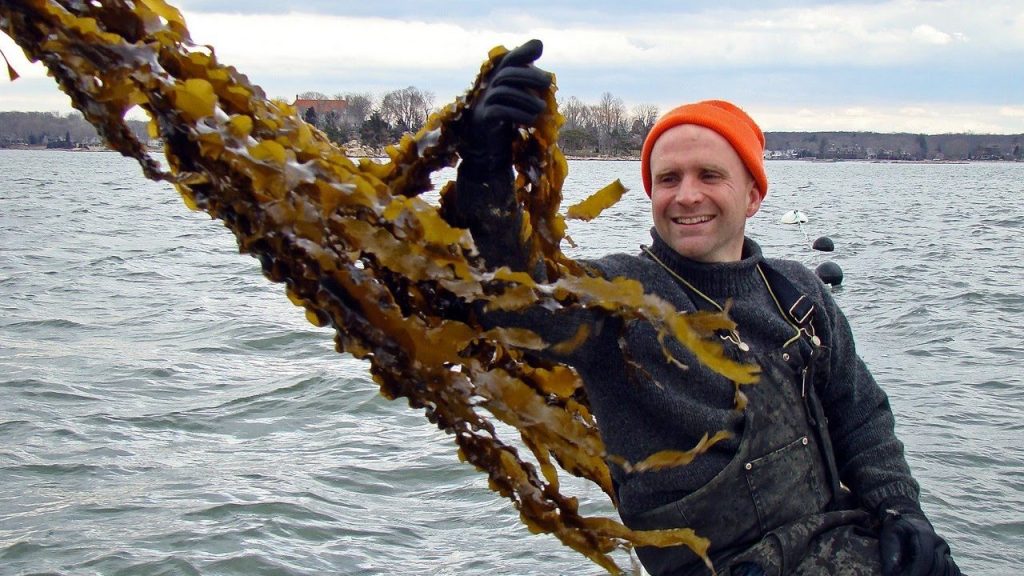 Meet the guy who’s farming the seas to save them

When Bren Smith first started farming kelp, he was embarrassed. He’d spent his life as a commercial fisherman, eating raw salmon he’d scooped out of the sea and exchanging harrowing, near-death tales in darkened bars. He vowed to never eat seaweed, even the stuff he grew, and for a while, when guys on the docks would ask him what he farmed, he’d sputter “Ah, I’m growin’ hemp.”

But the initial embarrassment gave way to a stronger sense of purpose — he’d found a way to return to the sea that, unlike the fishing he knew and loved (and the fish farming he knew and hated), wasn’t destroying it. Now he proudly calls himself an ocean farmer. He grows kelp and shellfish. His farm requires little money, zero pesticides or fertilizers, and absorbs carbon like nobody’s business.

Scaled up, Smith thinks farms like his (and maybe yours!) could feed the world, help slow and even reverse the impacts of climate change, and provide opportunities for people like him who hope to one day die on their boat (but who don’t want the ocean to die with them).

Smith dropped by Grist HQ in Seattle recently to talk to us about all these things, plus his new book: Eat Like a Fish: My Adventures as a Fisherman Turned Restorative Ocean Farmer, which includes a shortlist of kelp recipes and even tales of near-death experiences he’s had on the kelp farm (I mean, seriously, the guy can’t swim!).

This interview has been edited for length and clarity because it was hella long and sometimes even really smart people say “um.” Sorry to burst your bubble.

“I grew up in Newfoundland, with little houses brightly colored with leftover boat paint — the edge of the earth — selling cod tongues door-to-door, having squid squirt gun fights with my sister. My heroes weren’t cowboys and astronauts — they were fishermen. These are folks that had no bosses, they owned their own boats, lived a self-directed life, succeeded and failed on their own terms.”

An ocean of mistakes:

“My life has tracked two major ecological collapses: One was the collapse of the cod stocks in Newfoundland, 30,000 people thrown out of work, the biggest layoff in Canadian history — a culture and economy wiped out overnight. That is a stunning brand in my personal history. These fishermen that I loved and looked up to so much just sort of wandering, hungry ghosts with no meaning whatsoever. The second is climate change — when my oyster farm was destroyed [during Hurricane Irene and Hurricane Sandy].”

Why farm the sea:

“More of the U.S. is underwater than above. There are 10,000 ocean plants, thousands of ‘em that we can eat, and the ocean’s a blank slate. We have an opportunity to look at the ocean as a unique agricultural space, a unique place to build an economy from the bottom up — like, get a second crack at building the food system. We can weave justice into the DNA of it. I think things that are simple, replicable, and easy to deploy are what’s going to keep track with climate time — not billion-dollar farms.”

“Could the ocean be a space where women are the architects of the blue economy? Would they fuck it up as bad as we did, or would they actually build something really new and interesting? Same with indigenous folks. The First Nations in Washington state were the first ocean farmers, we think, in the world. They were clam farmers 5,000 years ago. Those kinds of things would be huge missed opportunities if this were just like the next superfood for Brooklyn.”

The nail-salon model of the sea:

“When you go to the ocean, and ask what makes sense to farm, shellfish and seaweed become so obvious, because they’re zero-input species. You can just grow things that soak up nutrients and light, and you don’t have to do anything. You don’t need pens and all these things, you can just use simple rope scaffolding systems, which are really cheap, really replicable, and very reparable. You use that rope scaffolding system to create an underwater garden. The basic principle is the nail-salon model of the sea: How do you make it as cheap as possible so everyday people can access it?”

“I started off embarrassed to grow vegetables. That’s really where the spiritual journey began. And everybody thinks [seaweed] is Asian — and is this just like the latest white guy going to get quinoa? The thing is, there’s this really long western culinary history of using seaweeds — bar snacks in Irish bars, Italian fritters. There were 1500 workers on the docks in San Diego creating 52 different kelp products pre-WWI. It’s stunning. This was a big, big industry, and it’s a cuisine that’s disappeared.”

“We’re at this really interesting culinary moment where chefs are creating climate cuisine, and they’re taking things that are not obviously delicious, and making them delicious and beautiful. And there’s huge power in that. We have recipes in the book because someone like [James Beard Award-winning chef and punk-rock drummer] Brooks Headley specializes in making vegetables unhealthy, and really understands the plate, and how to shift tastes. I think that’s a real well we can pull from.”

Why he doesn’t call himself an environmentalist:

“Quite honestly, I think environmentalists don’t understand that, without addressing questions of work, questions of inequality in a serious way, there is no climate solution. You’re never going to move the politics. The story is that a fisherman sells back his license to the government, gets a huge check, buys a brand new truck, goes down to the docks at 4 o’clock every morning, and drinks himself to death wishing he was out at sea. It’s not about money. We don’t want just any job. We want jobs with meaning. Other people think of it as mobilization, as what can you do individually, but underneath all of that is agency. I think agency comes through art, and work.”

Jobs we can write songs about:

“My whole life has just been an attempt to return back to the ocean and make a living. The solution [to] climate change, that has to include jobs we can write songs about. No one writes songs about lawyers and hedge funds, right? But coal miners, steel workers, farmers, fishermen — there are thousands of them. And there is something to that.”