The federal government did not grant citizenship to Native Americans until 1924 — and even then, states withheld their right to vote until as late as 1962. (Yes, you read that correctly.) Today, rampant voter suppression and accessibility issues continue to deny Indigenous voters a voice in the electoral process. That, coupled with the mixed emotions many of them feel about participating in the democratic system of a colonial nation, has led to voter turnout 5 to 14 percentage points lower than other racial groups. All of this has meant that Indigenous people historically have been overlooked as a voting bloc. Organizers are trying to change that.

Jade Begay (Diné and Tesuque Pueblo of New Mexico) is the creative director of NDN Collective, an organization dedicated to building Indigenous power and seeding sustainable solutions. Begay also hosts the podcast mini-series Sko Vote Den (Slang for “let’s go vote then” — more on that later!), which covers the intricacies and importance of voting in Indian Country. In key states like Arizona, where Native folks make up 6 percent of the population, an influx of new voters could sway the 2020 election and the country’s trajectory. “We’ve overcome a lot of adversity to be able to have the right to vote,” Begay says. “Now is the time to start asserting that power and that right.”

Fix spoke with Begay about some of the themes of the podcast, what’s at stake for Native voters (and non-voters) in this election, and the impact that she hopes to see. Her remarks have been edited for length and clarity.

On the nuances of voting in Indian Country 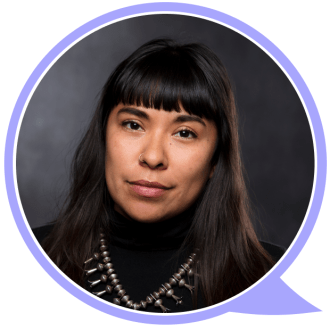 For my entire professional career, I’ve worked in Indigenous communities around issues like climate justice and Indigenous sovereignty. And elections always have seemed like a really contentious time in Indian Country. It’s always been interesting to me and also kind of challenging, knowing that there is so much mistrust and flat-out disdain for the U.S. government and seeing so many people fall into this voter apathy. And it is a very legitimate mistrust — we’ve seen time and time again the historical legacy of broken promises, broken treaties by the federal government. That’s very real, and it really hits home for people.

With the Sko Vote Den podcast, we’re not here to shame or guilt anybody. We’re here to provide information and the perspective that, actually, our vote matters. Our vote has, in some places, the power to change politics and change who is driving the systems.

A lot of our issues —whether it’s pipeline sites, missing and murdered Indigenous women, or even how the border wall impacts traditional food systems — they all end up in legislation. With those types of fights, we find ourselves in courtrooms, or working with our senators, our congresspeople, working with the federal government sometimes. So it’s interesting to me that there is a really strong sentiment to not participate in the democracy — and yet, we’re so quick to go into these battles with our elected officials. I’ve always thought that contradiction is fascinating.

On the origins of the podcast

I really wanted the podcast to be targeted to my peers. I’m a millennial. Statistically, we’re a strong demographic in the Native population, and we’re also a big voter demographic. So I wanted to reach my peers, whom I often end up in these kinds of conversations or debates with, and really break it down — how it’s possible for us to be radical and stand for sovereignty and self-determination, but also participate in this democratic process.

As I talk to people, as I learn more about this issue myself, it becomes more and more clear that the more we vote, the more the Native vote matters. That is something I am hopeful that the podcast will underscore.

“Skoden” is a saying within the Native community. It was really popularized during the #NoDAPL movement and at Standing Rock. It’s basically like, “let’s go then.” We also say “stoodis,” which is “let’s do this.” So it’s about knowing who our target audience is — millennials, youths, first-time voters. We wanted to focus on language and content that is for this generation, and also make it fun. You know, everyone talks about making voting fun and joyful, and for us, that’s what it looks like — it’s bringing in our slang and our culture, and Indigenizing the get-out-the-vote work.

On what’s at stake in this election

One thing I’ll say is that there’s not a lot of great polling for Native voters. This is something I talked about in the first podcast episode with Julian Brave NoiseCat; there’s not a lot of really comprehensive data on what matters to Native voters. So it’s a little hard to even answer the question of how we get the things that matter to us on the candidates’ agendas. There was actually a survey created this fall by the Native Organizers Alliance, to explore Native people’s priorities around the election, and also how people have been impacted by COVID and what they need during this moment. That will be really exciting to learn from.

For me, I’m not a single-issue voter. And a lot of Indigenous people are not either. But I look at what’s happening in the Southwest, where I live — or in places like New Orleans, which is home to the Houma people. I also recently spent two months in Alaska, learning about the most recent climate-change impacts up that way.

Knowing what I know about the climate and the environment in this very moment, it’s vote-or-die times. If we end up in a situation where the climate movement does not win in this election, my biggest fear is that we’re going to roll deeper and deeper into this crisis and expedite it in a way that we really can’t turn back. That would be catastrophic for Indigenous peoples — in the Arctic, in California, and across the world. If I had to single it down, that’s the issue that really keeps me up at night and makes me want to vote.

There has definitely been a big increase in voter registration in Indian Country this year. That’s really exciting and hopeful. There are so many amazing people and groups doing get-out-the-vote work — I’ve talked to some of those people on the podcast. We’ve been doing a lot of media and storytelling as well. And it’s working! There are more voters, and that’s what we want to see.

Another hopeful thing is that there are lots of Native people on the ballot this election cycle. Like I said, we’re facing a lot of mistrust and challenges with the political system as it stands. But what we’ve seen when we elect Native people to public office is that our issues actually make their way to the floors of Congress. We get bills that protect our communities, like the recent bills to address the missing and murdered Indigenous women crisis. And then I think other elected officials are kind of forced to see us and to learn about our issues. So, you know, maybe podcast mini-series number two can focus on what happens when we vote Native folks into elected office. But these are the types of wins we can continue to see the more we vote.

How ‘Avatar: The Last Airbender’ created a generation of climate activists

Pop culture can no longer ignore our climate reality