Ome Tlaloc walked through the North Dakota hills with a flashlight and a walkie-talkie, scouting for police in the prairie dark. Earlier that evening, I’d met the 30-year-old on Highway 1806, where he’d been sitting behind a makeshift barricade. Now he was doing reconnaissance. The Morton County Sheriff’s Department and the National Guard, stationed ahead of us on the road, were planning to raid the camp where Tlaloc and hundreds of other protesters had been living for the past week. The barricade was meant to stop the cops, or at least to slow them down. As he walked, Tlaloc listened to his radio for the code words that would signal when he and his comrades were to spring into action: “Eagle’s Claw.”

The Standing Rock Sioux reservation sits in the Dakota Prairie Grasslands, an endless sweep of elephan­tine hills once home to millions of members of the Lakota Nation. Today, it’s inhabited by fewer than 9,000 of their surviving descendants, and one of the few places in America where buffalo roam wild. In late July, the Dallas-based Energy Transfer Partners informed the Standing Rock Sioux that in five days its subsidiary would begin construction on a section of the Dakota Access Pipeline (DAPL) next to the reservation. After that, members of more than 200 Native American tribes and their allies gathered to block what would be America’s longest crude oil pipeline. Their encampments of teepees, tents, and RVs were mostly ignored by the media until private security guards set dogs on protesters and a few journalists were arrested, sparking a national conversation about tribal sovereignty, environmental racism, and police brutality.

The October night I met Tlaloc, the stakes in the #NoDAPL movement were as high as they’d ever been. If the “water protectors,” as the protesters called themselves, were cleared out, the pipeline would continue east under the Missouri River, coming within 1,500 feet of Lake Oahe, the Standing Rock Sioux’s water supply. A leak or spill, activists believed, would poison the drinking water of as many as 10 million people, nearly all of them on Native American reservations. The protesters’ goal was to block construction until March 2017, when Dakota Access would have to reapply for a federal construction permit — a delay that might make the project financially unfeasible. If the protesters were removed before then, Dakota Access would complete the 1,172-mile pipeline that would transport up to 570,000 barrels of crude a day. (On Dec. 4, the Army Corps of Engineers announced that it would not approve a permit for the pipeline to run beneath Lake Oahe.) 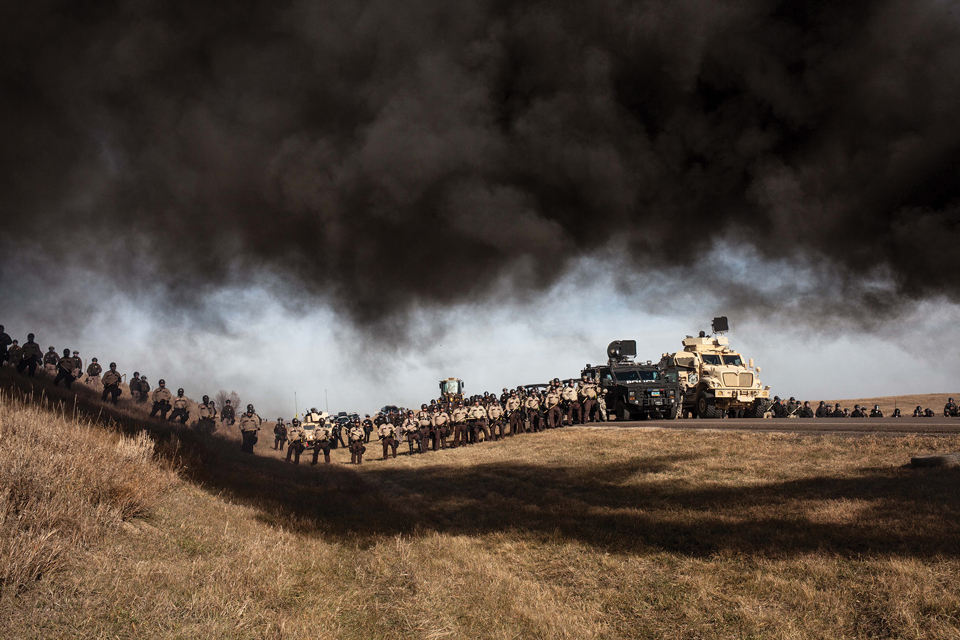 Tlaloc stopped at the top of a ridge. Off in the distance was the trench holding the lengths of 30-inch metal pipe. “An old Sioux prophecy says that a black snake will come to destroy the world at a moment of great uncertainty,” he said. “Unless the youth stop it.”

Back at the barricade, men in camo fatigues sipped cowboy coffee and waited. Pup tents formed a circle around a pit fire. “They’ve killed us before,” said Harry Beauchamp, a 63-year-old Assiniboine from Montana. Resting his cowboy boots on a soup pot, he told us about his participation in the 1973 standoff between members of the American Indian Movement and law enforcement agents in South Dakota that ended in the deaths of two Native American activists. A few weeks earlier, he’d been attacked by a dog brought in by a pipeline security contractor. His future son-in-law, he said, was bringing him a rifle. “I’m not going to let this be another Wounded Knee,” he said. 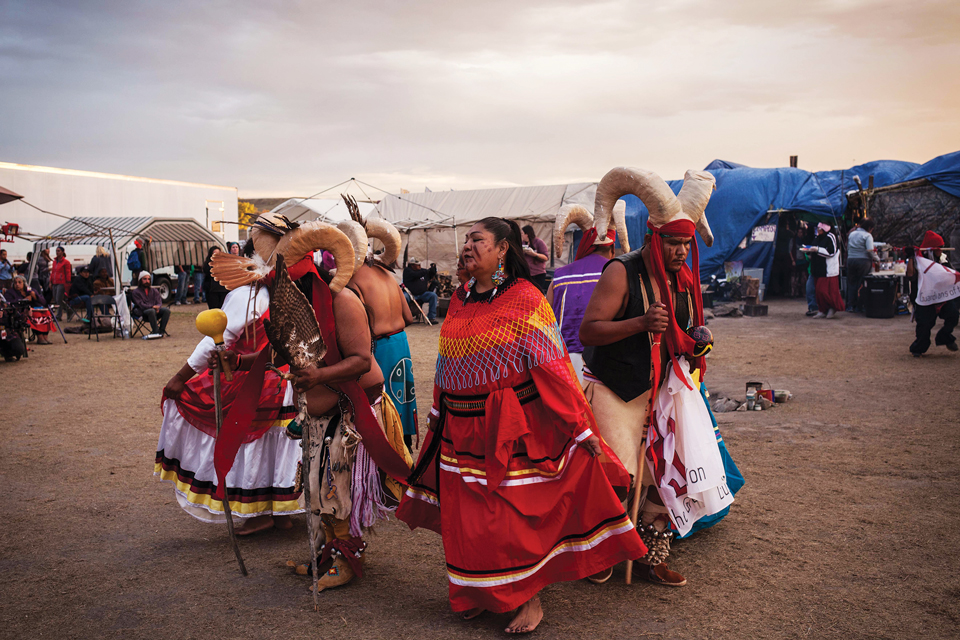 The next day, a pale sun burned through the morning haze, backlighting 200 sheriff’s deputies and National Guardsmen in full riot gear. Behind them were an armored personnel carrier, a land-mine-resistant truck, and the pipeline’s private security force — overseen by TigerSwan, a North Carolina firm that’s done work for the U.S. government in Afghanistan and Iraq. “This is a state highway,” a police commander said into a loudspeaker. “You must clear the road.”

On Aug. 19, North Dakota Gov. Jack Dalrymple, who served as an adviser to Donald Trump’s presidential campaign, had declared a state of emergency, and the National Guard mobilized three weeks later. On Sept. 3, security contractors turned dogs on the protesters. Not long afterward, Standing Rock Sioux tribal Chair Dave Archambault II asked the Justice Department to investigate civil rights violations against activists. “This country has a long and sad history of using military force against indigenous people — including the Sioux Nation,” he wrote. “[W]hen I see the militarization taking place in North Dakota against Indian people, I am genuinely concerned.”

Over the next 12 hours, I watched as grandmothers with red feathers in their hair, Oglala elders in cer­emonial regalia, and teens astride horses were teargassed, tased, and arrested. Cops fired rubber bullets at protesters and blasted them with earsplitting whines from Long Range Acoustic Devices. As the police marched down the highway, the crowd, echoing Black Lives Matter protesters, held their arms in the air and shouted, “Hands up, don’t shoot!”

Native Americans are more likely to be killed by police than members of any other group, even African Americans. More than 1 in 4 Native people live in poverty. (The average individual income on the Standing Rock reservation is $4,421.) Native unemployment levels are nearly double those of the overall population; their youth suicide rate is the highest in the nation. 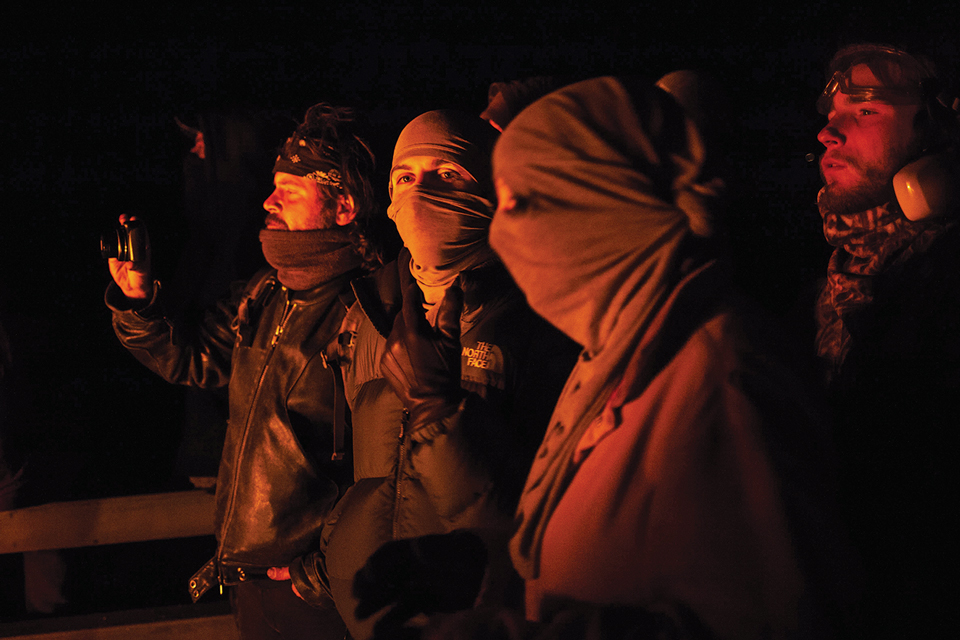 Many at Standing Rock saw the threat of environmental catastrophe as inextricable from racial injustice. An early proposal to route the Dakota Access Pipeline through Bismarck, 45 miles north of the reservation, was rejected by the U.S. Army Corps of Engineers because of concerns that it could harm the municipal water supply. (Bismarck’s population is 92 percent white.) “But it’s okay if it poisons Natives’ water, right?” said Chanse Adams-Zavalla, a 22-year-old who grew up on the Maidu reservation just north of Santa Barbara, California. He wore a camouflage backpack that had “Fuck Off” written on it and a matching camo cap that said “Smile More.” In May 2015, the coastline near his reservation was ravaged by the rupture of an oil pipeline. “It’s disgusting what happened to my people, bro, and we’re still being treated that way,” he said.

Young protesters with red bandannas over their faces dragged tree trunks onto the highway and set them on fire. A heavyset teen stood before the flaming barricade, his back to the police. “Stop lighting these barricades on fire, brothers!” he said. “I’m a member of the Standing Rock Sioux tribe.” He paused and looked at his feet like he might cry. “After this, I have to live here.”

“Sellout!” a young man in a balaclava shouted, hurling a tire onto the pyre. Someone else picked up the chant. “Sellout! Sellout!”

The scene underscored the conflicts within the anti-pipeline movement. Some activists, led in part by a group of protesters who lived in a compound called Red Warrior Camp, were committed to stopping the pipeline through direct action. While many Standing Rock Sioux were out on the front lines, Archambault was also lobbying Washington in hopes of a legal victory. In early November, Red Warrior Camp was asked to leave Standing Rock for promoting tactics that the tribal leadership thought were too extreme. There were also tensions between white-led environmental groups like 350.org, which focuses on climate change, and Native activists, who believe the larger issue is one of tribal sovereignty and the unfinished struggle for Native American rights. The protesters were spread among three encampments, including a largely Native camp and another filled with white activists that I heard described as the “Brooklyn” of Standing Rock. 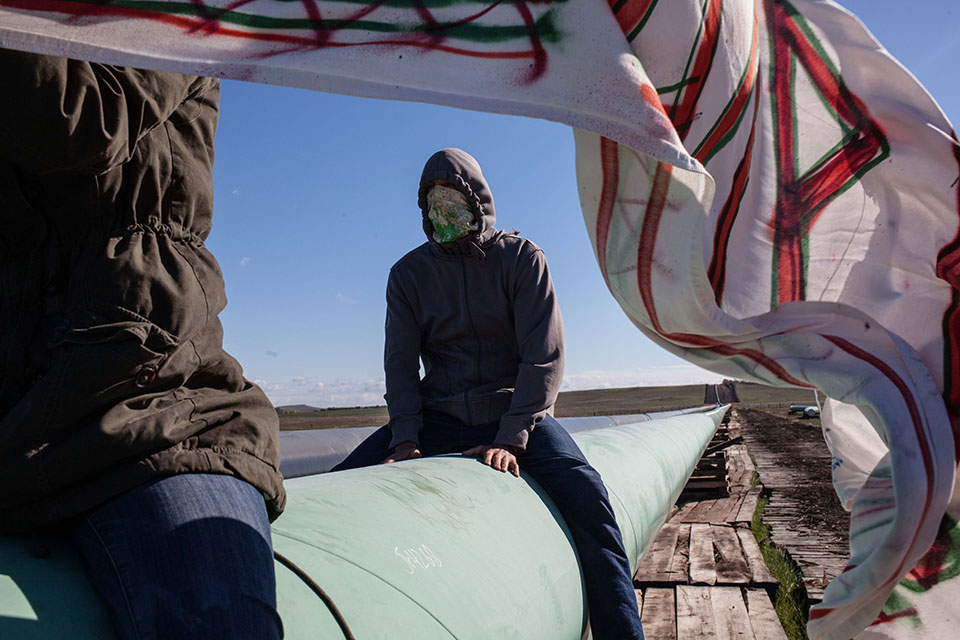 Back at the barricades, Miles Allard, a Sioux man with a white mullet, rushed to the assistance of the teen who’d tried to calm the crowd. “The only way we’re going to win this is by prayer,” Allard said. “If we use violence, we will lose.”

“Why do they want to kill us?” asked LaDonna Allard over breakfast at the Prairie Knights Casino and Resort, the area’s largest employer. Allard, a Sioux woman, was hosting a protest camp on her land; she was accompanied by her husband, Miles, who had called for nonviolence at the barricades a few days earlier. The police had won those clashes, clearing the road and arrest­ing 142 protesters, including the Allards’ daughter, Prairie. (During a prior arrest, Allard said, her daughter was stripped naked, left in a cell overnight, and asked repeatedly, “Who’s your mother?”) Construction resumed on the pipeline, whose North Dakota section was roughly 95 percent complete.

Allard recalled the life of her great-great-grandmother, Nape Hote Win, who as a 9-year-old survived the 1863 Whitestone massacre, an attack by the U.S. Army 50 miles east of Standing Rock. She was held in a prisoner-of-war camp for seven years. That battle paved the way for the Standing Rock Sioux to be confined to their current reservation. Allard’s father had to flee his land in 1948 after the government dammed the Missouri, flooding his farm. Her father and son were buried along the pipeline’s path.

On Election Day, Energy Transfer Partners announced that it would defy a request from the Obama administration to postpone construction and would begin tunnel­ing under Lake Oahe in two weeks. CEO Kelcy Warren had given more than $100,000 to support Trump, a stockholder. “Overall, I’m very, very enthusiastic about what’s going to happen with our country,” Warren told investors after the election. In mid-November, the Army Corps of Engineers stepped in and said it would not allow completion of the pipeline until there had been further review of its environmental impact. Reaffirming that decision in early December, the Corps said it would consider alternate routes for the pipeline. ETP attacked the decision as “the latest in a series of overt and transparent political actions by an administration which has abandoned the rule of law in favor of currying favor with a narrow and extreme political constituency.”

Later that night, I passed Beauchamp’s tent, but it was empty. He had gone back to Montana, feeling bitter and defeated. Adams-Zavalla, however, was in great spirits. “This isn’t the end of our movement,” he said. “It’s the beginning.” Fifty horses had just arrived from the Oglala-Sioux reservation, as had 100 Native American youth runners who’d jogged from Arizona. That afternoon, the Seven Council Fires had been lit for the second time since 1862, a ceremony in which the seven branches of the Dakota Sioux demonstrated their unity. “When my grandkids ask me where I was during Standing Rock,” Adams-Zavalla said, “I know what I’m going to tell them.”

“Even if somehow, someway, they build this pipeline,” he went on, “they’ve inadvertently sparked a whole generation of us indigenous folks and everyone who wants to stand with us to fight for Mother Earth. We’re going to inherit this planet, bro, and everyone’s welcome to inherit it with us if they want.”

Around us, protesters were chopping wood, battening down tarps, and getting ready for the long Dakota winter. On a hill overlooking the camp, DAPL roughnecks labored away. The moment was uncertain, yet jubi­lant — each side racing toward the future it imagined. 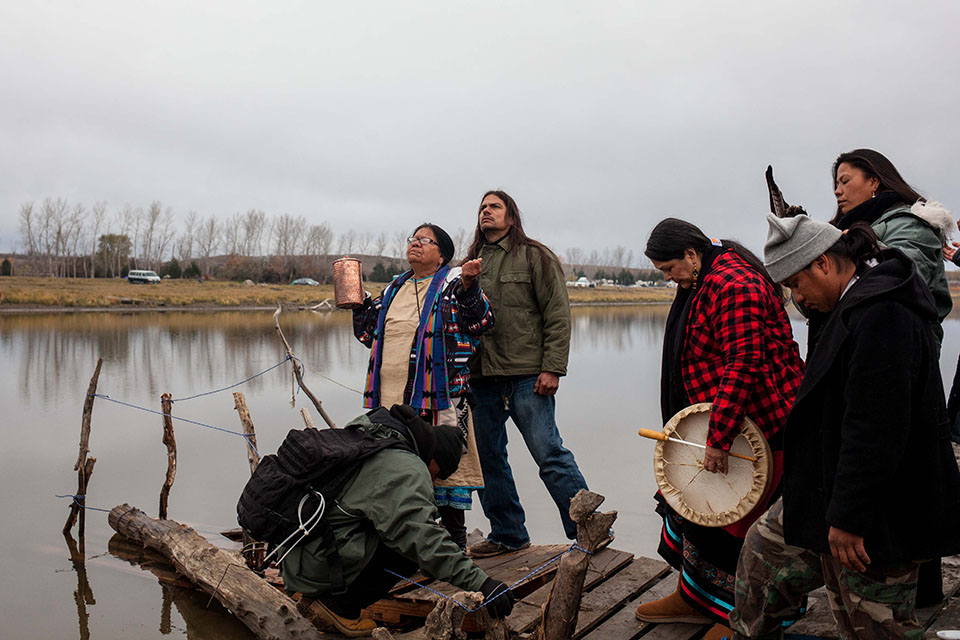 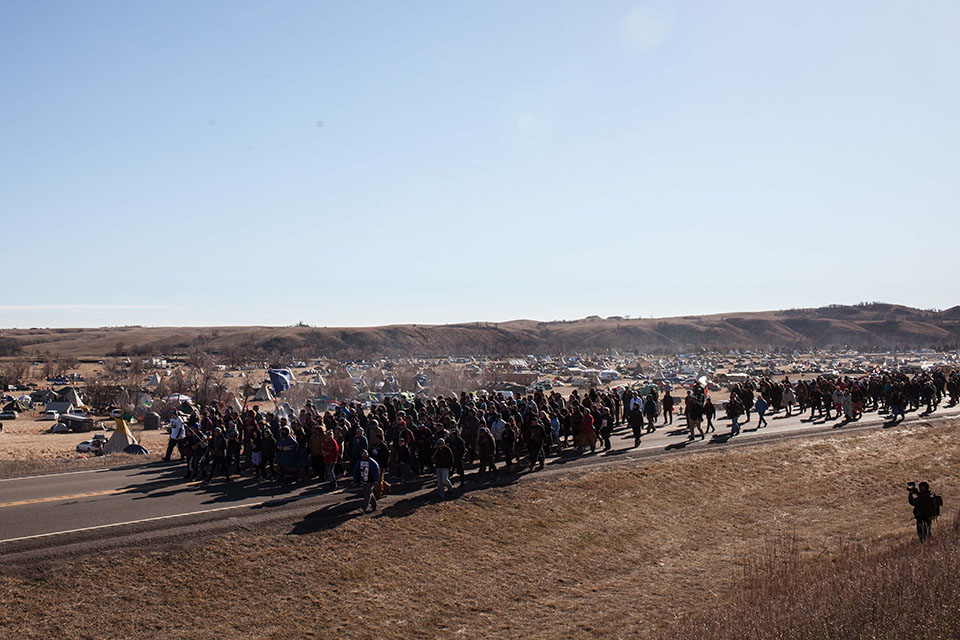 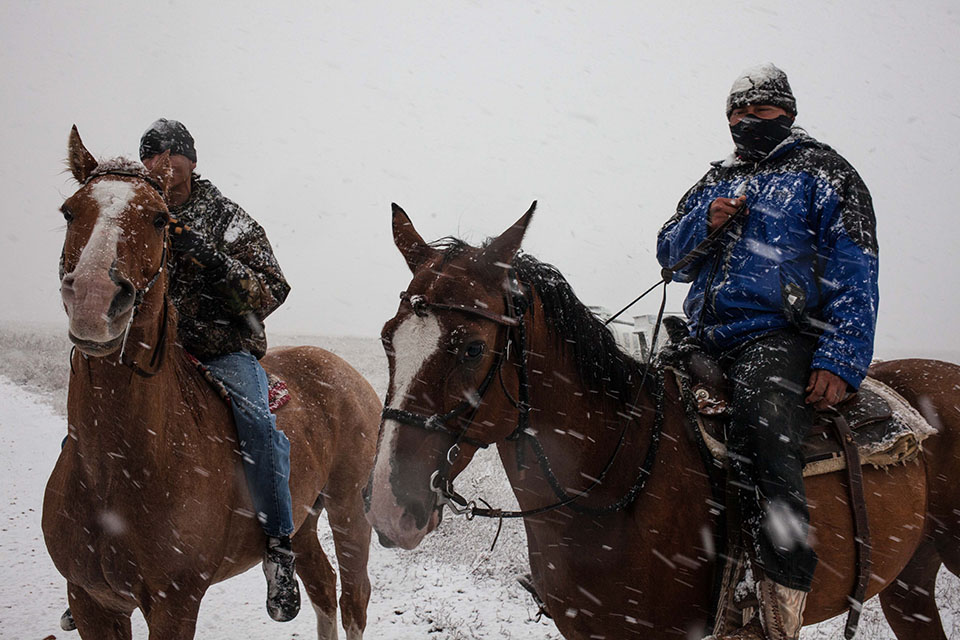 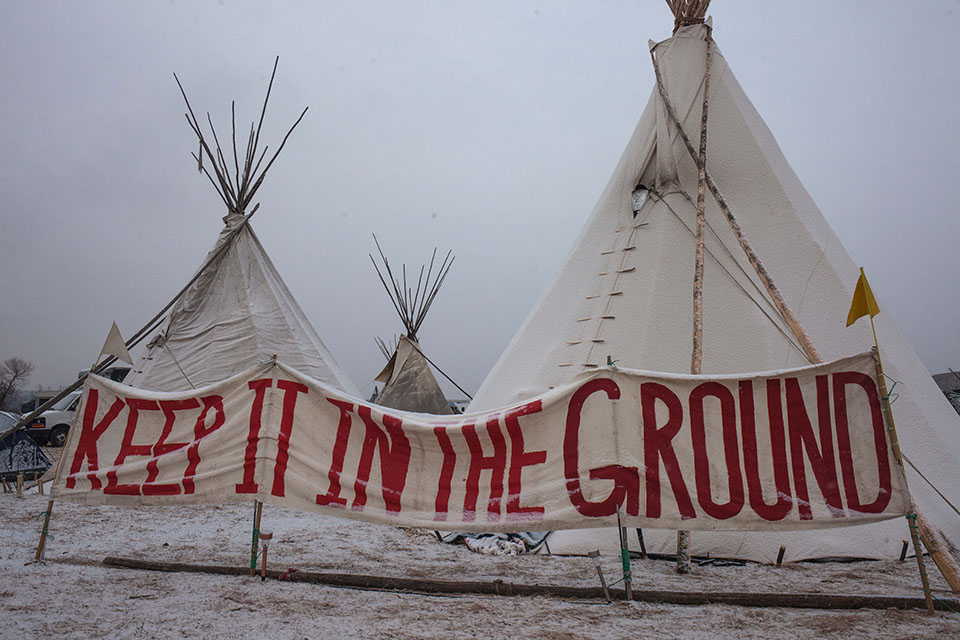