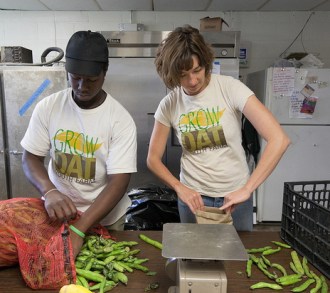 Smack in the middle of a half-dozen shipping containers and striding up a mound of gravel, Johanna Gilligan, 31, can’t contain her excitement. “This looks so awesome!” She nods her head at an alcove between two containers, painted the pale color of new celery, with dry sinks attached. “That’s going to be for processing.”

Gilligan, co-director of New Orleans’ Grow Dat Youth Farm, traipses up the mound, which terminates at a deck of sorts and more containers, crowded with architectural students from Tulane University and local urban farm experts. Beyond the deck sits a bayou, lined with trees weeping Spanish moss into the water; the I-610 freeway buzzes along in the background. “I can’t believe how much is done! My office is going to be in a treehouse!”

She has reason to be excited. At four acres, the buildings’ site is just a sliver of City Park, 1,300 acres of green space on New Orleans’ north side. But come February, the buildings will be done, the beds will be ready for planting, and the second class of Grow Dat farmers will commence their work. The goal: one acre planted, 10,000 pounds of food grown, 20 jobs for student workers.

Pitched as the natural progression of programs like Alice Waters’ Edible Schoolyard (New Orleans is home to the first Edible Schoolyard affiliate outside of the Bay Area, and its founding director, Donna Cavato, sits on Grow Dat’s board), Grow Dat will welcome its second round of student workers in February. The project was founded in 2010 with the Tulane City Center, a community design and architecture initiative, and the Urban Innovator Challenge Fellowship, also at Tulane. The backing let Gilligan, a founding staffer for the New Orleans Food and Farm Network and a driving force behind Rethink‘s New Orleans School Food Report Card, bring in a small staff to work out kinks for the program’s first year. In its inaugural year, Grow Dat employed 13 student workers who grew a total of 2,200 pounds of food, donating nearly two-thirds of it to food banks, and selling the rest at a farmers market.

The effort, says Denise Richter, who coordinates gardens at five elementary and middle schools for Edible Schoolyard New Orleans (ESY-NOLA), solves a riddle that’s confounded ESY-NOLA since it was founded: how to keep students engaged with food after eighth grade.

“There was always this moment where it was like, ‘Great, we’ve been able to establish a culture and an understanding of how important it is to know where your food comes from and cook it,'” says Richter, who says ESY-NOLA works with more than 500 students each year. “And there’s always this regret, because what do they do [after ESY]? Go to a place where their cafeteria food looks like it did five years ago, eating slop. Grow Dat is such an asset, because our students can apply their skills and go even further.” 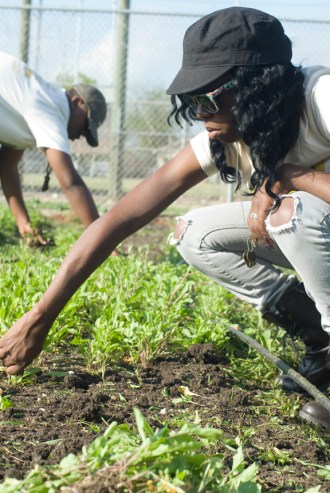 With an older — if much smaller — pool of students, Grow Dat is aiming to expand teenagers’ food knowledge while teaching even broader lessons about work and collaboration. “A key concept of Grow Dat is that you cannot do social change only in one neighborhood,” says Gilligan. She sees the program’s site at City Park as neutral ground for students, who this year will come from a mix of public and private schools, to learn “to communicate across race and class lines.”

That’s a heady goal, but if Aston Shields, 17, is any indication, Grow Dat may have some luck in meeting it. One of last year’s students — he’s angling to return as a crew leader this year — Shields didn’t start out interested in food. “I was just reading posters on the wall, and stumbled onto [the job listing],” says Shields in an urban drawl, adding that he mostly applied because it was a paid job. For a modest stipend, he learned how to plan and maintain food gardens, wash and prepare vegetables for market and track their sales, and even attended a handful of lectures on food systems at Tulane. “I came here and I was like, ‘Wow, I never even really thought about how people produced our food,'” says Shields. “It was just a whole new world.”

But in addition to being paid for his work, Shields was able to take home fruits and vegetables from plots he was helping tend at the Hollygrove Market and Farm — a special boon to a family living in the Hollygrove neighborhood where, says Shields, the closest thing to a supermarket is a Walgreen’s. “Once Grow Dat gave me fruits and vegetables, [my family] embraced it,” says Shields — even if the end results weren’t exactly what most slow food acolytes might have had in mind. “We had some shiitake mushrooms,” says Shields. “And my momma made sloppy joes with it.”

Truthy consequences: A world without Grist