When I was a small fry, vacationing at the Youth Hostel on Martha’s Vineyard, my family spent an afternoon paddling up Herring Run Creek. When we reached shallow water and got out to push, we noticed our shins were bumping against fish. They were herring. My dad had a fishing license, so we began scooping them into the boat with our hats, T-shirts, and hands. Eventually, we inadvertently scooped our way too close to property owned by Jackie Onassis, which is why a motorboat manned by dudes in suits rumbled up. It wasn’t looking great until they saw our herring haul, and admitted that, by law, if we were fishing we could carry on.

That encounter, and the regrettably stinky cooking experience that followed, summarizes most of what there is to say about herring in America. First: They are all around us, yet we don’t notice until we bump into them. Second: Herring can resolve problems — from trespass to the ecological balance of the oceans.

There are plentiful schools of this fish, though in places the population has crashed. Nonetheless, the more herring we eat, the more we help, says Geoff Shester, California campaign director for the marine protection group Oceana. “You’re actually helping save herring by eating them directly, because if you eat a pound of farmed salmon, it took four pounds of herring to create that salmon,” Shester told NPR. “So, you could just eat the one pound of herring directly.”

Herring are also nutritious, hence the Dutch saying, “A land with lots of herring can get along with few doctors.” What’s not to love?

Why don’t we wake up and smell the herring? The problem — as my family discovered when we tried to cook them — is that fresh herring are messy and smelly if you don’t know how to handle them.

I’m here to change that. These little fish can be delicious if you come armed with some simple knowledge. Don’t fear the herring! 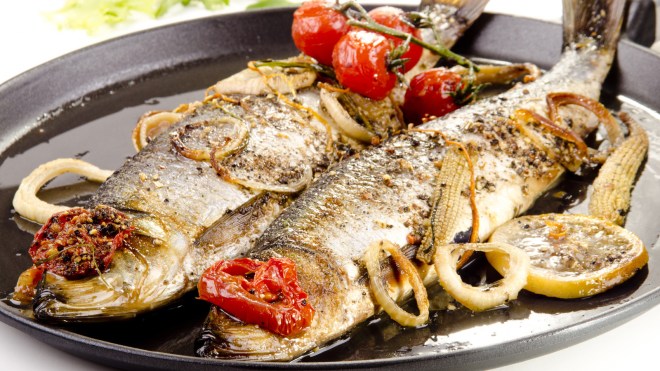 First of all, you aren’t likely to find fresh herring at the fish counter. It’s just not popular enough here and Japan buys it up like crazy. The Japanese are cuckoo for kazunoko, a type of cured herring roe popular during festivities, especially New Year’s. This demand dominates the economics of the North American herring fisheries, on both coasts.

If you do get your hands on some fresh fish, here is a good set of instructions on how to filet herring (and, if you’re so inclined, to make fermented picked herring). I don’t recommend frying your cute little fishes in a pan as you would a trout. They’ll produce splattering grease and fishy steam. Cook them outside, or your kitchen will never smell the same. If you must fry herring, do so with copious amounts of onion.

The easiest, most elegant option is grilled whole herring. Clean them, sprinkle salt, squeeze lemon wedges, and they taste spectacular. In Italy, I used to grill herring over dried olive branches, and it actually smelled pretty good.

In some coastal cities and towns in the United States, fresh herring from local runs is showing up on menus as people begin to learn about them. Well-connected fishmongers can also occasionally get their hands on fresh herring from Europe.

But unless things change in the international markets, aspiring herring-tarians are generally going to be the pickled and kippered varieties. 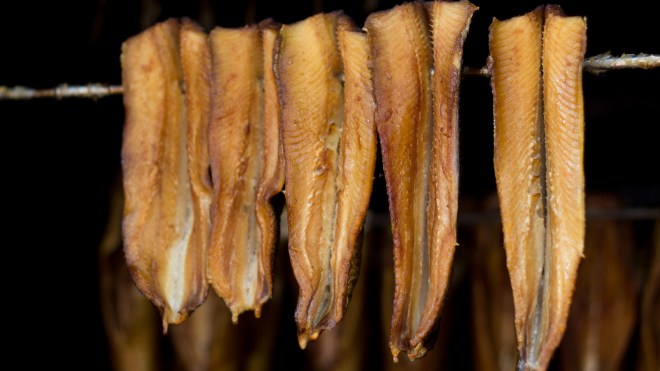 I enjoy a good smoked herring, especially the canned kippers, which are more satisfying than sardines (members of the herring family). Crumble smoked kippers over pasta with olives, capers, olive oil, cheese and garlic, and toss with parsley or basil.

I don’t want to do that every day, however. Let’s face it, “smoked” is a folksy way of saying “fumigated with carcinogens.” But there are no suspected consequences of bathing fish in brine. That brings us to pickled herring. 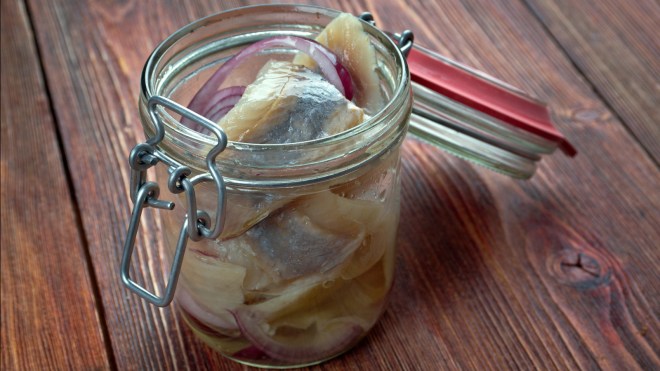 I’m an Ashkenazi Jew, and my poor Eastern European ancestors had a love/hate relationship with this rich fish. While it got on their nerves — hence the Yiddish expression, “What am I, chopped herring?” — pickled herring was a cheap, stable form of protein that went well with vodka.

Pickled herring has a much fresher quality compared to smoked. The flavor of pickled herring embodies one of the oldest tricks in the cookbook: the pairing of fat with acid. Think wine and cheese, oil and vinegar, ketchup and fries. The fat covers the tongue, only to be pierced by acid, and the two spin around on your taste buds like a yin/yang chasing its tail. Or something like that.

Here are some more specific recommendations that work this principle, arranged in order of difficulty.

Since pickled herring is already a perfectly balanced food, all you really need is a fork, and something with which to wash it down. So eat, drink, and be herring. Oh, and maybe a napkin. It goes well with gin, too: a herring martini is a thing. 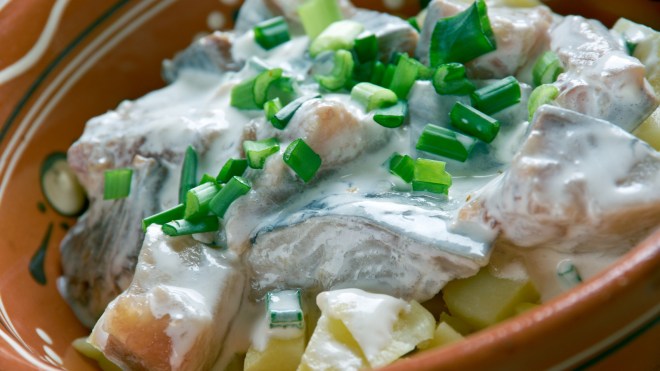 Dad would bring home a jar, drain the brine, stir sour cream and fresh, sliced onions into the jar, and put it back in the fridge. Adding this cream rolls with the fat/acid situation, boosting both, while re-upping the onions harks back to the days when serving herring with onions was a common trick. Onions covered up the smell of less-than-fresh fish. Pickled herring can also be purchased pre-packed in a similar cream sauce, which is essentially the same thing as dad’s. But in my experience the fish has likely sat too long in that cream sauce. Using “fresh” pickled herring, onions, and sour cream brings the dish to another level.

The same can be done with other fatty marinade replacements. Fish out some pieces of herring and marinate them in olive oil, in the fridge, for a Mediterranean version of dad’s sour-cream style. After a few minutes it’s already a delicious combination, with the fruity notes of olive oil intertwining with the sweet brine. After a few days the oil has completely impregnated the filets, which are luxurious. The oil congeals in the fridge, but whatevs; at room temp it quickly melts.

Another variation on my dad’s technique replaces the sour cream with mayo (or Vegenaise, if you nasty). These creamy fish chunks are splendid wrapped in nori.

Whatever the nature of your replacement fat, you can use these rich chunks of ocean in sandwiches, or on little crackers with a piece of greenery, perhaps. In addition, the mayo’d version happens to be spectacular in our advanced recipe: 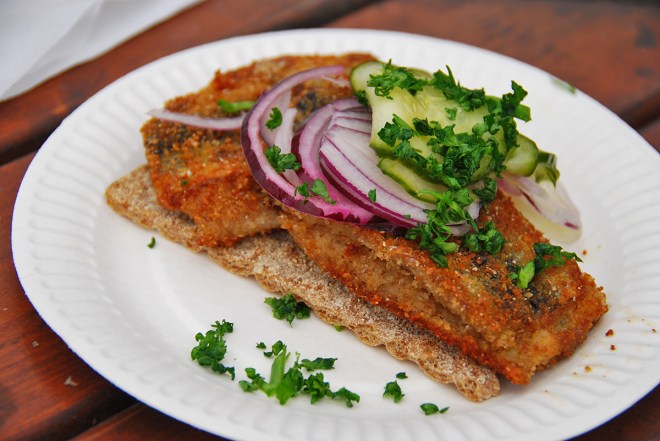 Aside from wrapping it in bacon, the surefire way to make something awesome is to deep-fry it.

Acidic and sweet on the inside, crusty and rich on the outside, the taste of deep-fried pickled herring is so complete that it doesn’t require dipping in any sauce. It tastes, in fact, like it has tartar sauce built in — especially if you’re deep-frying mayo’d or creamed pickled herring.

Pat dry some pickled herring and prepare a three-station fish-coating assembly: a bowl of flour, seasoned with black pepper and garlic powder; a bowl of egg, beaten with a splash of milk; a bowl of breadcrumbs or panko flakes.

Dredge the herring pieces in the seasoned flour to make the egg stick. Dredge it in the egg wash to make the breadcrumbs stick. Then roll it in the breadcrumbs. (Note: Do not attempt to skip any of these steps if using mayo’d herring. The breading will not stick if you roll the creamy chunks in breadcrumbs without the egg and flour.)

Heat enough oil to submerge the pieces, to just below 375 degrees. If you have to wing it without a thermometer, the oil should be hot enough that a drop of water splatters, but not so hot that the oil smokes.

Deep fry until golden brown, then remove the pieces and allow them to drain. Take the leftover onions from the brine, along with any little herring bits floating around, and put them through the breading gauntlet. Pat them into fritters, or separate them into fishy onion rings, and fry.

Where I shop, it’s possible to get pickled herring by the pound from a big bowl on ice behind the fish counter. It’s not fancy, even by pickled herring standards — just herring in clear brine with onions and a few allspice seeds. The fish guy will drain the brine from my container before weighing it, so I’m only paying for fish, which is cool as long as I eat it right away, which I do.

Most importantly, the herring is firm and chewy, not soft, and the skin is almost completely stripped off, a sign that the fish was fresh when pickled. Skin from fresh herring comes right off, while skin from older fish will come off in pieces, some of which will remain attached.

Assuming you find a local source of pickled herring that you can live with, you now have the tools necessary to hit it hard. As well you should. Because as fish go, herring are anything but red herrings. They should be a primary focus of our pescatarian pursuits — rather than the artificially colored pink fish that eat them.