Skipper Ian Kirouac presses his cellphone to one ear and a radio to the other while he barks orders to his crew from atop his perch; meanwhile, he keeps a lookout for salmon. His multitasking mixes traditional and modern technologies.

Suddenly, Ian’s gaze focuses hard on the water. He sees fish. “Take ’em,” he yells, and all hell breaks loose. He yanks on a rope releasing an armada of gears; the tail end of the net lifts out of the water, and two fishermen pull frantically hand-over-hand on the net to isolate a school of sockeye salmon in a corner pocket. They lift up on the netting above the fish and the sockeye splash into a live tank below deck. The crew is left gasping for breath.

This is the reef-net fishery in Lummi Island’s Legoe Bay. The Washington Department of Fish and Wildlife calls it the best selective fishery around, and the Monterey Bay Aquarium’s Sea Food Watch gives it a “Best Choice” rating. The reef-net fishery in the Salish Sea employs energy and supply-chain efficiencies, clean harvesting techniques, and state-of-art fisheries management to operate one of the best-practice fisheries on the planet.

While I observed, fishers caught about 600 sockeye and pink salmon. It’s only the beginning of the season — later on, one haul might net that many. One starry flounder and one king salmon were intercepted as by-catch; neither was damaged and both were released back into Puget Sound without harm. Tests show that the mortality of released fish is less than 0.5 percent. 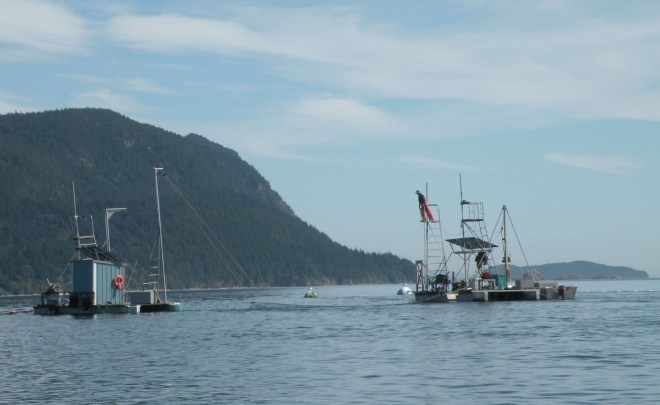 A crew member stands on the perch of a reef-net fishing gear peering into the water for approaching salmon.K.M. Bailey

The “gear set” is a pair of stationary platforms anchored along traditional migratory routes the salmon follow on their way to the Fraser River to spawn. No fossil fuel is burned to chase these fish. The winches are powered by solar-charged batteries, and the rest of the energy comes from muscle power.

Based on a pre-season test and forecasting models, regulators set a quota to maximize the reproductive potential of the salmon populations. Fishermen only take what’s above and beyond that needed by the population to sustain itself.

Unlike most fisheries — where the strategy is to catch as many fish as possible, and then try to get rid of them like a surplus of Silverados on a car dealer’s lot — these reef-net fishermen utilize a lean supply-chain approach and catch only enough fish to fill orders on hand.

Before allowing the fishery to open, regulators examine genetic samples from test fishing to ensure that the flow of migrating salmon contains a minimal number of fish from stocks (or reproductive groups) which might be depleted. There are 19 recognized Fraser River spawning stocks, and some of those are protected.

Modification of a traditional fishery

Centuries ago, the indigenous people of the Pacific Northwest perfected the technology of reef nets. The ancient reef net, made of the inner bark of cedar, willow saplings, and sometimes nettles, was laid underwater near bottom, and sloped towards the surface. Fishers attached the net to anchors at the upstream end of the surging tide and to the canoes at the other end. They anchored their canoes at the downstream end and spread the net.

Seaweed fronds and dried grasses were woven into the side and bottom ropes to fool the salmon into the waiting net. When spotters observed salmon swimming into the net, they released the canoes from their anchors and they swung together. Meanwhile, the downstream end of the net was pulled in, followed by the upstream side to trap the fish inside. Eight to 10 men crewed the Native American boats.

These days, the operation is similar to the ancient technology, but with a few modifications. The nets are now nylon and lightweight. Plastic streamers have replaced seaweed and grasses. A tower over the net allows fishermen to observe the fish.

The collection of gears, electrical switches, and pulleys on the deck of the offshore platform reminds me of my machinist grandfather’s garage in the 1950s. A few electric motors, scavenged from hatches of World War II bombers, are still in use in the fishery. It’s a complicated setup to first pull the head of the net up to stop the incoming fish, then pull the bunt, or rear, of the net to trap them — and finally to lift the bridge, or middle, to concentrate the fish in a pocket.

“Give me some breast” 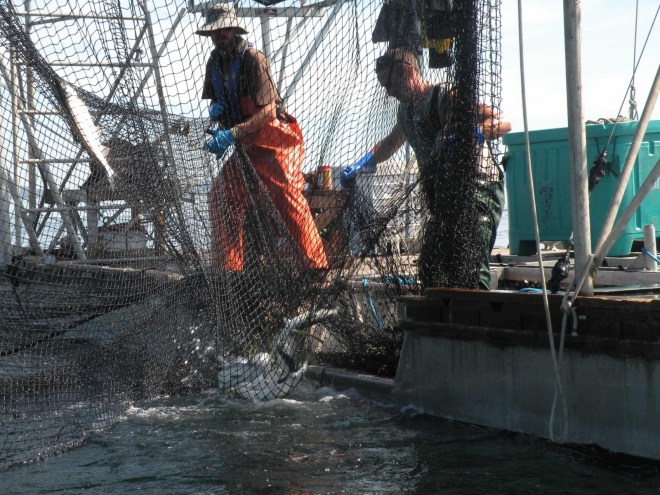 Fishermen haul-in the net to gather salmon in a corner pocket.K.M. Bailey

Legoe Bay, in the northwest corner of Washington, is long and sandy, strewn with driftwood. Mt. Baker stands high in the distance. There’s no sound on the water among the platforms, only the chatter of fishermen on the adjacent gear sets, punctuated by war whoops and the clatter of winches when fish arrive.

Ian’s partner, Sierra, sits in a shed on the inshore platform, monitoring the displays of four upward-looking video cameras mounted on the bottom of the net. Two other crew members, Jake and Josh, do most of the net hauling from the offshore platform. The net is submerged between the two platforms.

Ian hollers, “Sierra, give me some breast.” I look over at Josh with a question written on my face, while my other eye strains in its socket to watch Sierra, strictly out of professional curiosity. Josh is a tall, hard-working Texan whose easy drawl reminds me of the actor Matthew McConaughey. He smiles and tells me that if he were in the shed, Ian would use the same words. He means: Let out some line and square the net.

From the spotter’s position, the incoming salmon are first a fleeting shadow or a ripple on the surface some 150 feet out. The advancing fish take shape: ghostly silver forms gliding through the dark. As the school approaches, the spotter’s adrenaline surges. Sitting in his perch, he’s like a great blue heron on the hunt. Sierra confirms from the cameras that the fish are trapped. “Give ‘er hell,” is the traditional call to haul the fish. When the nets surge up the tower sways in a manner most greenhorns, like myself, find unnerving.

I mention that a Lummi Nation fisherman told me that his ancestors would leave a hole at the working end of the net to guarantee that some fish would escape the net and return to spawn in the river. He said it was called “the vagina.” Is there a thing about these nets and female body parts?

Ian looks at me sharply. “I’m not sure I buy that. If there was even a little hole in this net, a fish would find it and the rest of them would follow behind. The net would be emptied in seconds.” Maybe the hole in the Lummi net was a relief valve during an era when the fish were more abundant. The net could become too heavily laden with fish for mere muscle power to retrieve them.

Between then and now: development of a responsible fishery

In the late 1890s, the Native American reef nets disappeared through a combination of competition with non-indigenous salmon traps and adverse court rulings on land use. When the salmon traps were outlawed for all fishermen in 1935, hundreds of non-indigenous fishermen set up reef nets to replace the traps. They hired Lummi fishermen to show them how to fish the gear. At the high point, 70 reef nets fished in Legoe Bay alone, but now they have been whittled down to a reasonable number.

Eight gears remain in Legoe Bay and three more fish in the outer San Juan Islands. Four of the Legoe Bay licenses belong to the Lummi Island Wild Salmon Cooperative. The gear sets of the co-op share their catch, and crew members shift from platform to platform depending on where they are needed. In 2007, Lummi Island Wild won the Governor’s Award for sustainable practices.

The modern reef-net story illustrates an artisanal approach in which fishermen harvest salmon using traditional principles to attain a clean catch, while modernizing the technique for energy and supply-chain efficiency. Management of the fishery is state-of-the-art, and fishermen cooperate with fisheries managers to integrate responsible fishing practices.

Lummi Island reef-netted salmon is a Community Supported Fishery, meaning that consumers buy salmon directly from the fishermen through local buyers clubs. The product can also be found in finer markets and restaurants of the Pacific Northwest that support sustainable fisheries.

Kevin Bailey is a Seattle-based writer and marine ecologist. He authored the books The Billion Dollar Fish: The Untold Story of Alaska Pollock and The Western Flyer: Steinbeck’s Boat, The Sea of Cortez, and the Saga of Pacific Fisheries. He is currently working on a book about artisanal fisheries.