California dairy farmers are going nuts for almonds, but at what cost? 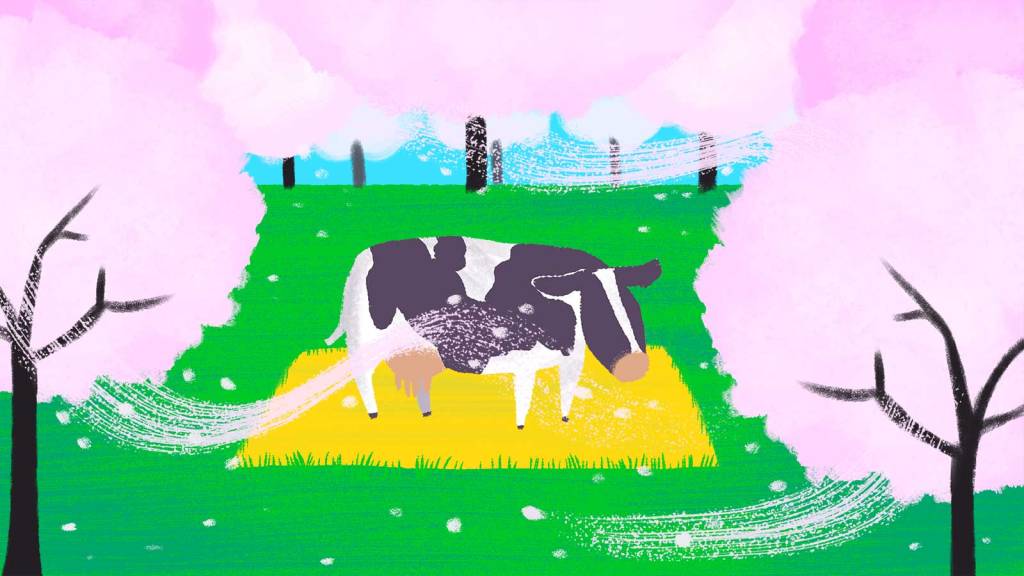 California dairy farmers are going nuts for almonds, but at what cost?

This is Part 2 of a two-part series about California’s organic dairy industry. Read Part 1 here.

“The bees should be flying around today,” Ward Burroughs says in a slow, deep baritone, furrowing his brow over close-set eyes as he peeks over the steering wheel of his white pickup truck. We’re surrounded on both sides by a sea of pale pink — row upon row of densely planted almond trees, their plump, compact blossoms in full bloom.

The thermometer on the dashboard reads 59 degrees Fahrenheit, two degrees above the minimum temperature required for the bees to leave their hives and start pollinating, turning those blossoms into nuts that drive the state’s nearly $5-billion-a-year industry. Ward narrows his eyes, scanning a sky the color of an oyster shell for the little insects that could keep his family farm afloat.

As I wrote in my last post, Ward and Rosie Burroughs own and operate Burroughs Family Farms, a pair of organic dairies in California’s Northern San Joaquin Valley. But the Burroughs, along with many organic dairymen in the state’s Central Valley, are in the middle of a perfect storm of sorts: California’s drought and federal water restrictions are quickly drying up cattle pasture and driving organic feed costs skyward. National dairy co-ops like Organic Valley are starting to respond to the crisis by paying farmers more for their milk, but prices throughout the milk supply chain aren’t high enough to meet the rising costs of production.

To help weather the storm, the Burroughs have sold a third dairy and ramped up the production of other goods, including grass-raised meat, eggs, and olive oil. Many of their colleagues have decided to leave dairying entirely, though, closing the doors on family farms that have operated for generations.

And then there are the almonds. What used to be miles of open pasture surrounding the Burroughs’ farm is now unending swaths of almond orchards — a sight that didn’t exist just a decade ago. Those almonds have been a savior for some organic dairymen, who have chosen to rip out their grass rather than go out of business altogether. But with California now supplying roughly 80 percent of the world’s almonds, the race to establish orchards has become a frenzied one.

“The almonds and pistachio crops are really king now in the Central Valley,” Ward says. “Dairies used to be.”

Farming, by its very nature, is in a state of constant adaptation — to environmental factors, market forces, and an ever-evolving landscape. But California’s ongoing drought is remaking the land faster than most farmers can adapt to it, and many are tearing out their sustainable, organic pasture to make way for a crop that is both water- and chemical-intensive, and just as vulnerable to the state’s drought.

It begs the question: What’s a better use for this land, satiating California milk drinkers, or almond eaters half a world away?

Almonds are to the 2000s what soy was to the health-food craze of the 1970s. And right now California owns the market — it’s the only state in the entire country that produces almonds commercially. Fueled in part by a growing body of research that touts almonds as an ultimate superfood with pretty considerable cardiovascular benefits, annual revenues from the state’s almond industry have increased from $740 million to $4.35 billion in the past decade.

The craze expands beyond the U.S., where almonds have even surpassed peanuts in popularity. In just four years, China, the largest importer of California almonds, has quadrupled its import to 150,000 tons annually. WhiteWave Foods, the company behind Silk, a top-selling soy milk brand, estimates that soy now represents just 35 percent of its plant-milk sales, while almond milk carries more than half of its market.

The spike in demand has led many a dairy farmer to pivot from milk to nuts. Farmers who lease land, meanwhile, often find themselves out of luck. Last year, pasture in Stanislaus County, where the Burroughs’ farms are located, was valued at $2,000 an acre, while land for almond orchards was as high as $25,000 an acre, almost 12 times higher. Very few landholders want to lease their land for pasture anymore as a result, leaving many dairymen in a mad scramble for rangeland so that their cattle can meet the 120-day grazing minimum mandated for organic dairy by the U.S. Department of Agriculture.

Adding to the pressure to sell out and move on, cattle prices are at an all-time high, up 30.7 percent from last year according to the USDA. For many cash-strapped farmers, cows are worth more dead than alive.

“In this environment, because the price of a cow is so high, farmers are selling cows instead of milking them,” says George Siemon, CEO of Organic Valley. “I would say that over half of the farmers [in the co-op] have had to downsize some. It’s a significant thing.”

But while almonds offer a financial windfall for struggling dairymen — just as organic dairying once did before the drought — the nut-tree boom could be a short-lived one, too.

Almonds are a long-term commitment and profits are no sure or immediate thing. An organic dairy farmer must rip out his sacred pasture — it takes three years to certify pasture as organic — in order to reset the terrain for an orchard of almond trees, which don’t bear fruit for at least three or four years. The crop also requires massive amounts of water to survive. It takes more than a gallon of water to produce a single almond, and about 10 percent of California’s entire water supply is directed toward almond farming alone.

With more than half of California in drought so extreme some experts are considering creating a new “D5” drought category, almond growers are diverting water from annual crops like vegetables – which are much easier to replace than an entire orchard – and drilling a flurry of new wells to keep their trees alive with groundwater. According to the USDA, this year’s production forecast is expected to reach 2.10 billion pounds, up 4.5 percent from last year’s crop.

But what happens if droughts continue to worsen across California? The landscape of the Central Valley, the state’s agricultural heart, is quickly becoming an unforgiving one, as the drought deepens and the race for land and water sweeps the West.

In the near term, as long as the drought continues, there will be winners, and inevitably losers. Organic dairy farmers will continue to struggle for both land and for market share: While organic dairies are woven into the geography, Big Dairy can work around the drought, keeping milk prices cheap by importing feed from areas where rain is still falling and the price of land isn’t skyrocketing. Economic logic trumps ecological logic once again.

But as booming as the demand for California almonds is right now, the crop is just as vulnerable to drought and depleted groundwater as dairy is, making the long-term future for these farmers even cloudier.

Young dairymen who have dreamed about taking over their family business are finding that they can’t assume the financial burden, and families with entire foundations built on dairying are suddenly finding them uprooted as almond orchards continue to bathe the Central Valley in a sea of pale pink. But for now, at least, nuts are keeping some organic dairymen on the land — land their families have tilled and plowed and cultivated for generations.

There are no clear answers here, but part of the solution rests in the buying power of the consumer. Co-ops like Organic Valley can do their part by raising milk prices to pay their farmers, but organic milk drinkers are going to have to pay more when prices start to climb. And climb they will: Organic Valley recently upped its pay prices to farmers, which translates to a 20 cent increase on supermarket shelves. According to Siemon, we could see another price increase as early as March 2015.

“The drought is more than just a lack of water, or only watering just two days a week. It means that for consumers, the cost is going to go up and up,” Rosie Burroughs says. “And that’s farming — we can’t depend on cheap food year after year.”

The future of farming in the Central Valley, she says, rests on the fate of the family farm.  “If you can’t hand it down to the next generation,” she says, “then you can’t farm.”