As California parches, people in the state have begun to ask tough questions. Will we be talking about rationing drinking water at some point? Will technology rescue us? Will farmers abandon the state’s great Central Valley?

The simple answer to all these questions is: no. As California’s climate shifts, the impacts will be profound. They’re just not going to be as dramatic as our sci-fi imaginations, or the prohibition on restaurants automatically serving water, would lead us to believe. A lot of rain and snow falls on California — just not enough to give it away to everyone for every possible use. In a hotter California, competing uses will probably push some agriculture out.

Some climate models show the state getting wetter, others show it getting drier, said Dan Cayan, a climate researcher at the Scripps Institute of Oceanography and the USGS. But, he said, “It’s all headed in the warmer direction. The central tendency is an increase of 2.5 to 3 degrees Celsius by the end of the century.”

That’s a problem, because California relies on the mountain snowpack to store water from heavy winter storms until it’s needed, in the dry summer. Almost a third of the water California uses in an average year comes from snowmelt. Nearly all the state’s precipitation comes between November and March, but the snow evens out that distribution into a steady trickle. The climate models suggest at least a 50 percent decline in average snowpack by the end of the century, Cayan said. If the precipitation doesn’t linger as snow and the state starts getting an entire year’s worth of water coming down the rivers all at once, it’s going to be a big engineering challenge to manage it, he said.

Conveniently, there’s a new report out on California’s climate change prospects from Risky Business (a group of climate realists organized by Michael Bloomberg, Henry Paulson, and Tom Steyer). It contains plenty of useful information, and it also makes a good jumping off point to examine how the drought will shape California’s future

Some of the most serious risks detailed in the report have nothing to do with water: California will almost certainly see an increase in heat-related deaths, and a decline in productivity. Energy use will ratchet up to deal with rising temperatures, and the sea will rise. The report notes that water management will also become more difficult, and this will affect farm communities first.

I don’t generally make predictions, but I feel safe in making this one: People in cities will have enough water to thrive. That’s because each person needs a relatively small amount of water. It might be wise to enshrine the right to a minimum amount of water (perhaps 13 gallons per person per day) as a basic right, to protect the poor. We should have no problem meeting that need. 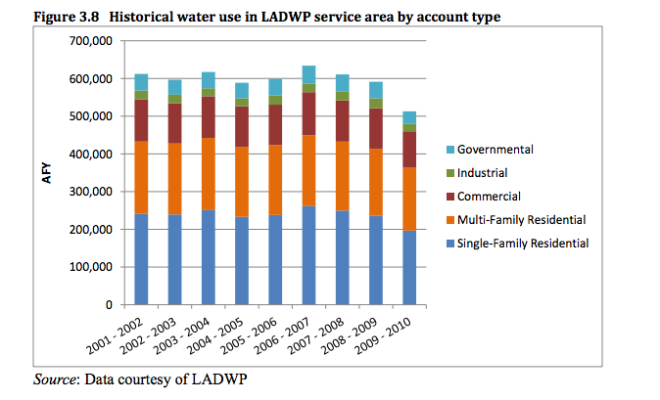 But, we have a long way to go. There are lots of places around the state where the average person uses 80 gallons a day at home (and a few where it’s north of 300 gallons a day). We could all have beautiful landscaping on 40 gallons a day, easy.

The real problem with water in cities is not going to be too little, but too much: Coastal cities are vulnerable to sea-level rises. The Risky Business report estimates that there is a 1-in-20 probability that we will see more than 4 feet of sea-level rise by 2100. In California, that sea-level rise “would put the following specific facilities at risk of inundation”:

According to the Risky Business report, increasing heat will hurt certain crops in certain parts of the state — like the “Inland South” east of Los Angeles:

Cherries, for example, are “unambiguously threatened by warming,” with average yield decline projections of over 10% by 2040, even with carbon emissions kept at a level below the “business as usual” pathway. Almonds, too, are sensitive to warming and show a strong negative response to high February nighttime temperatures, which shorten the trees’ critical pollination period. And though gains during warmer springs and summers can potentially offset this effect, adaptation will be necessary to avoid harmful winter warming. For a state that produces 80% of the world’s almonds, even a small percent decline could have major repercussions on local and global markets.

But these numbers assume no adaptation or changes on the part of farmers, and the authors of the report note: “Farmers have always adapted to changing weather  and climate conditions, with adaptation and flexibility built into their business models.”

Philip Bowles, whose family farms near Los Banos, Calif., said they are changing and adapting every day. His family has idled a quarter of their land and planted more tomatoes. The tomatoes grow enthusiastically with drip irrigation — it’s the crop that maximizes profits best right now, Bowles said. But you can’t just grow tomatoes every year — the soil requires crop rotation. They are also growing cotton (though they’ve cut back on the acreage), cantaloupes, corn nuts (the corn that they make into those snacks), and alfalfa. The family is also putting in a “gigantic solar plant,” something more farmers are doing as the temperatures rise. This great Newsweek video, by Sachi Cunningham, has more on farmers who are shifting from almonds to solar:

I wanted to know why Bowles was still growing alfalfa — it takes even more water than almonds, and doesn’t provide the same profits.

“In times of drought, alfalfa is very useful,” he told me. The reason it takes so much water is that you can get four to seven crops in a single year. If the rains don’t come, you can turn off the water and it will go dormant, and then water it again when you are ready (one seeding will grow for three to six years) — so it provides tremendous flexibility. At the same time, it fixes nitrogen, enriches the soil, and provides habitat for birds and insects, Bowles said. So this year, the Bowles’ family got a couple cuttings of alfalfa, then stopped cutting.

Will ag move out of California?

The ag correspondent for Mother Jones, Tom Philpott, has been, in his words, “pushing a more regionalized, widely distributed scheme for filling our salad and fruit bowls, one less dependent on California and its overtaxed water resources.” Specifically, he’d like to see a produce boom in the soggy southeast.

That’s not a bad idea, and a lot of farmers have been thinking about that for years. Farmers who live in the South already grow a lot of produce, said Tim Coolong, a University of Georgia agricultural cooperative extension agent who knowledgeable friends pointed me towards as the produce guru of the South.

“Growing vegetables down here is done on a large scale ~180,000 acres (large wholesale growers shipping nationally and internationally) so it isn’t something that we aren’t doing or haven’t thought of,” he wrote in an email.

And farmers are already trying to capitalize on the lack of water in the west. “Our current vegetable growers are trying some new crops to try to fill market niches that may be left open by the California drought.”

So why don’t we grow more food where there is abundant water and less food in California? Drought or no drought, California’s environment is so good for farming that it makes up for the lack of water. California’s predictability — the fact that the state hardly ever gets rain during the summer — makes for consistently high yields. In the South, on the other hand, “high levels of rain, while helpful for filling our aquifer in Georgia, can wreak havoc on crops. Plus our fluctuating weather — one week it can be 45 F and the next 80 F — can be problematic depending on what is grown,” Coolong wrote.

Russ Parsons, food writer for the Los Angeles Times, found that the drought has barely affected food prices in aggregate, partially because farmers are still getting such good harvests. In some cases the dry weather is actually improving conditions. There’s a bumper crop of California strawberries, for instance.

Because California has such a good environment for growing food, it also has the systems to support it: refrigerated warehouses, tomato canning factories, and a regular tide of migrant laborers. In the South, people will invest in building those systems if they think they can make money. And they probably will. Because California’s farm economy is massively larger than any other state’s, even a small shift of food production out of California would change the face of farming in the South significantly, Coolong said.

Bowles thinks that, in the long run, irrigated agriculture in California will probably decline. But, he said, be careful what you wish for: “We have by far the strictest standards for labor protections, pesticide use, pollution.” A shift out of California would mean less competition for water, but it could also mean the food had a heavier environmental footprint.

If California does scale back its farming, most people probably won’t notice. “It would be super painful for the very rich and the very poor,” Bowles said. In other words, big farmers like him may lose money. And communities of agricultural laborers will suffer — that’s already begun.

California isn’t fighting for the last drops, but the drought is a real crisis. And according to Bowles, that’s not necessarily a bad thing. He was a friend of Marc Reisner, author of Cadillac Desert, a popular history of water struggles in California. “Marc always used to say, ‘Nobody every talks sensibly about water in California until there’s a drought’,” Bowles said.

And there’s no shortage of issues that require sensible talk. California water districts are currently hammering out plans to regulate groundwater use. The state’s markets for buying and selling water are tangled in red tape. And, as temperatures rise, we’ll need to figure out new ways of storing the water that used to sit in the snowpack. Californians need to be forced to work out these problems if they are going to find a future that doesn’t suck. The state isn’t imperiled by the drought; it needs the drought.