Coming soon to a cereal bowl near you: Mycotoxins!

Mycotoxins are much scarier than a horror movie. They are poisons produced by fungi and can cause cancer, suppress immune systems, and straight up kill you. They’re already in a quarter of the world’s cereals, but mycotoxins mostly affect people living in the tropics, where warmer weather allows for fungal growth. They haven’t posed a major problem in the cooler latitudes of the northern grain belt. But if you are reading this you’ve probably already guessed: Climate change could change that. 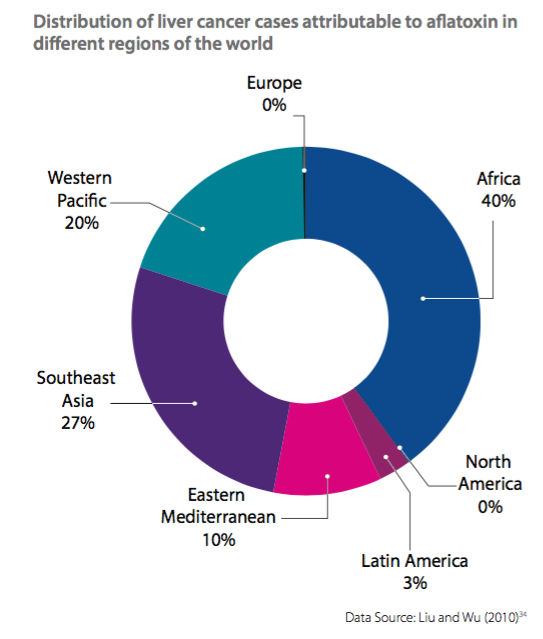 Aflatoxin is one kind of mycotoxin.

A new report from the United Nations Environment Programme identifies toxic crops as a growing threat, driven by climate change. The UNEP has a map showing how mycotoxin exposure could spread north into Europe. If you want to visualize a similar map for North America, just remember that Washington D.C., and San Francisco are near the same latitude as southern Greece. 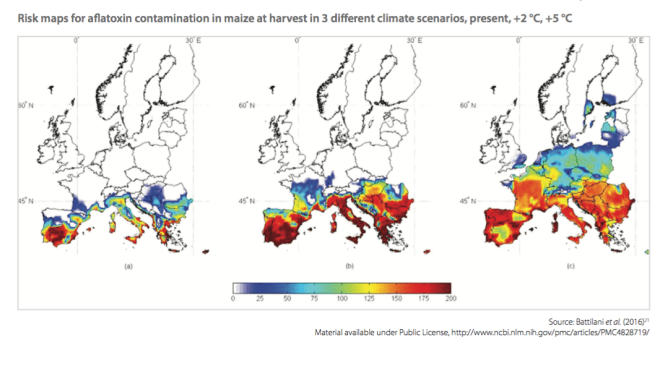 Mycotoxins are specifically related to fungi, but there are other ways that the climate can poison your food. All plants contain low levels of chemicals that can become toxic if you eat enough of them, and drought is increasing concentrations of nitrate and hydrogen cyanide in foods.

For instance, plants need nitrate to grow, but during droughts some crops accumulate the chemical rather than converting it into protein. Other crops suck up a lot of water all at once, capturing dangerous amounts of hydrogen cyanide.

There are ways of adapting. To combat mycotoxins, the UNEP report recommends breeding fungi-resistant crops, drying seeds properly, and testing for contamination. Drought-resistant and disease-resistant crops would help prevent the accumulation of other toxins. Climate change will introduce these problems to the wealthier northern countries, but in poorer southern countries people are already suffering from the effects of toxic crops. Steps to fight mycotoxins, and other forms of toxicity, can’t come soon enough.