For the past week, a 30-pound box of vegetables, the first of three expected to arrive this winter, has been sitting on my counter. Its contents, a mix of carrots, beets, potatoes, onions, radishes, squash, and sweet potatoes, theoretically will last the month, so long as I store everything properly.

The sight of this box, which I will unpack as soon as I find space/create a root cellar, fills me with mixed emotion: with gratitude both for the farmers who have worked so hard to harvest and store before the first frost, and for the vegetables themselves, who promise to provide me with countless bowls of soup, many a gratin, and sheetpan after sheetpan of roasted side dishes. But this box fills me with fear, too, of my commitment to such a large quantity of storage vegetables, and doubt in my ability to stay strong at the grocery store, to avoid meltdowns in front of the endive and arugula that result in impulse purchases. And I worry that one day I might just chuck that sack of carrots out the front door to the neighborhood children building snowmen in my yard. 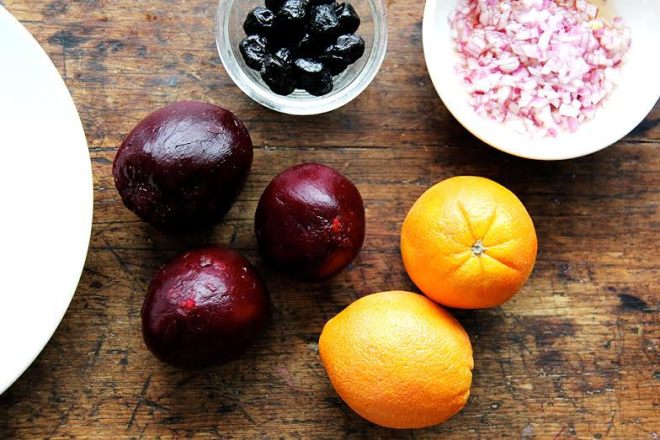 Oh dear, I am afraid I am that spoiled Northeasterner, accustomed to a world of refrigerated transportation, finding herself grateful for year-round access to many luxuries, but most especially for lemons, limes, and oranges. It’s just too hard to imagine a winter without citrus, without squeezing lime over mashed sweet potatoes, lemon over roasted potatoes, orange over salt-roasted beets.

So many root vegetables awaken with a splash of fresh juice; none more so than beets. In this salad from Yotam Ottolenghi’s Plenty, oranges and beets, a classic combination, are joined by salty, black, wrinkled olives. In addition to the fresh orange, vinegar-macerated shallots provide a much-needed acidic nip, a bite to balance the beets’ earthy sweetness. A drizzle of olive oil unites all of the elements and, while additions such as herbs and cheese are unnecessary, a sprinkling of tarragon and a crumbling of goat cheese will further brighten this wintry mix.

Note: This salad (recipe below) likely won’t win over any beet resisters, but, with its fresh, sharp flavors, for those feeling overrun by roots, it might help stave off a meltdown or two at the grocery store. At least for the near future. 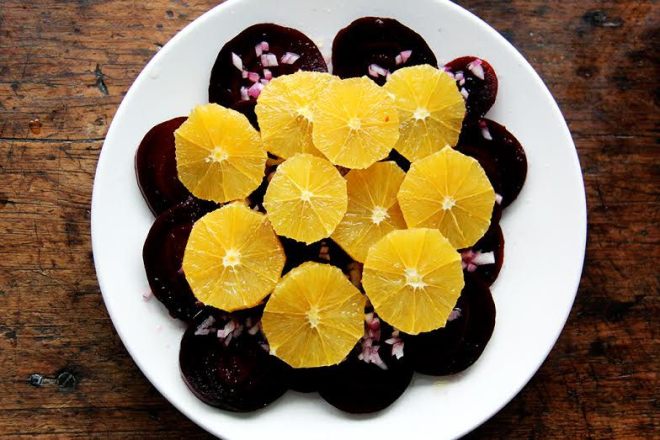 Choosing and storing your beets: 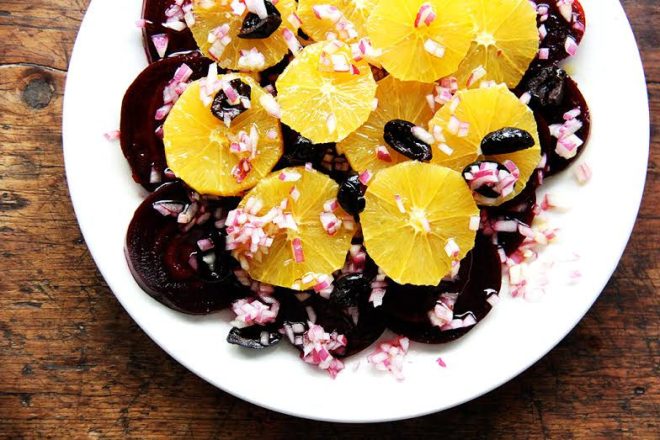 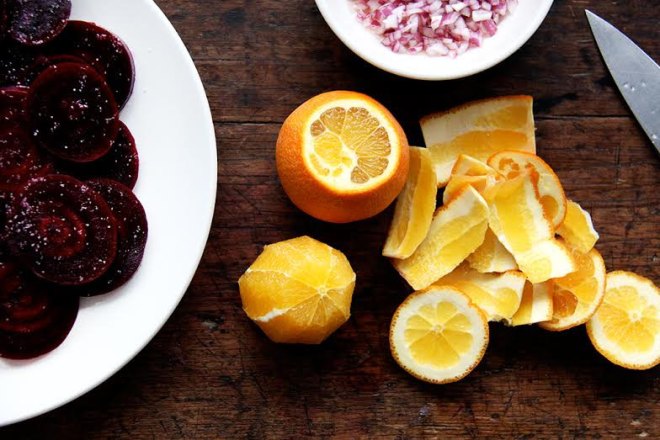 • Make the cleanest, purest borscht, with a light broth seasoned with a healthy dose of lemon and dill. Or roast beets with carrots, purée with a ginger- and parsley-infused vegetable broth, and serve chilled with crème fraîche and lime.

• Roast beets, purée them with eggs and flour and make ravioli filled with goat cheese, doused with brown butter. Or make a traditional pasta dough and a ravioli filling of boiled and puréed beets and potatoes, then serve with melted butter and poppy seed.

• Smoke beets in a foil packet nestled with rosemary, then toss them with a life-altering cottage cheese dressing.

• Peel and slice them, sauté them with shallots, braise them with wine until tender and serve with Boucheron and good country bread.

• Boil beets until tender, process until smooth, mix with melted chocolate and espresso, spread batter into a springform pan, and bake it into an extremely moist, nearly molten chocolate cake. 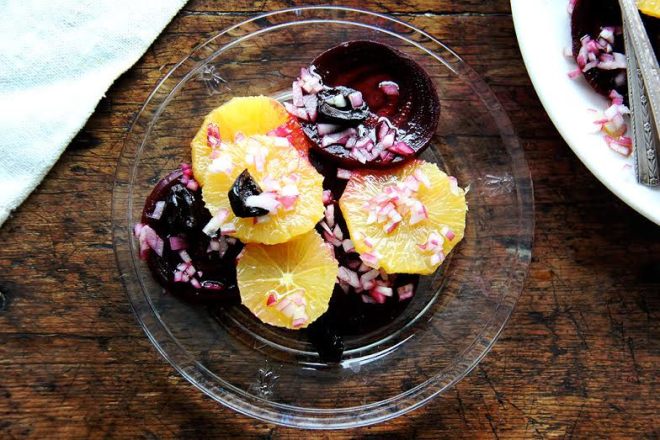 Beet, Orange, and Black Olive Salad
See the full recipe (and save and print it) here.
Adapted from Yotam Ottolenghi’s Plenty (Chronicle, 2011)

2 to 5 beets, depending on the size
1 shallot or half a small red onion
2 tablespoons vinegar (I like white balsamic)
Good sea salt or kosher salt to taste
Pinch of sugar
2 to 3 oranges
2 tablespoons olive oil
Handful of black, wrinkled olives, pitted and halved

How to make your true love a sweet succulent terrarium