Don't have a cow, but Big Dairy's climate footprint is as big as the UK's 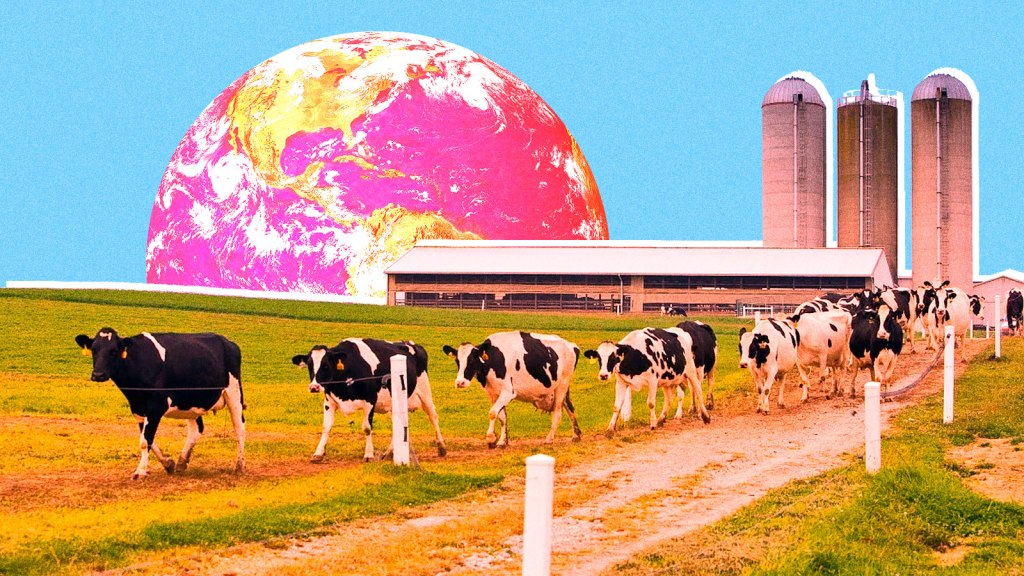 If dairy cows were a country, they would have the same climate impact as the entire United Kingdom. That’s according to a new analysis from the Institute for Agriculture and Trade Policy (IATP), which considered the combined annual emissions from the world’s 13 largest dairy operations in 2017, the most recent year for which data was available.

The institute’s report follows up on a similar analysis the organization undertook for 2015. That year, the IATP found that the five largest meat and dairy companies combined had emissions portfolios greater than those of some of the world’s largest oil companies, like ExxonMobil and Shell. Most of the emissions were from meat, but this latest report finds that dairy remains a significant and growing source of emissions: In the two years between reports, the 13 top dairy companies’ emissions grew 11 percent — a 32.3 million metric ton increase in greenhouse gases equivalent to the emissions that would be released by adding an extra 6.9 million cars to the road for a year.

Dairy emissions come mostly from the cows themselves — specifically, from their notorious burps. Fermentation processes in cows’ stomachs produce the byproduct methane, which doesn’t stick around in the atmosphere as long as carbon dioxide but absorbs more heat. The Intergovernmental Panel on Climate Change says methane from ruminants like cows are an important contributor to the increase of atmospheric methane levels.

Shefali Sharma, director of IATP Europe and author of the new study, said it was staggering to see dairy’s increase in emissions, especially since it occurred in the two years after the Paris Agreement was negotiated. “We’re supposed to be going in the opposite direction,” she told Grist.

The report points to consolidation and rising production as the main culprits for the increased emissions. From 2015 to 2017, the 13 companies used mergers and acquisitions to expand geographically and subsume smaller farms. As the companies got bigger, their production increased by 8 percent, which led to the emissions hike.

The dairy industry takes issue with the report’s framing, chalking the emissions increase up to an “accounting change.” As smaller farms were absorbed by the big companies, the industry argued, their production and greenhouse gas emissions got wrapped into the 13 largest producers’ emissions numbers.

“These are not new emissions,” the International Dairy Federation and the Global Dairy Platform said in a joint statement responding to the IATP report.

At the same time, the companies haven’t done much to help researchers figure out their net greenhouse gas output; none are required to disclose their climate impacts, and only five of the 13 publicly report their emissions. Zero of them have committed to reducing the overall emissions footprint of their dairy supply chains.

“There’s no transparency, not even basic production numbers,” Sharma told Grist. To calculate the companies’ emissions for the IATP report, Sharma used production estimates calculated by the IFCN, a dairy research network, and calculated each firm’s associated carbon emissions using an accounting method established by the U.N.’s Food and Agriculture Organization (FAO).

Instead of focusing on total emissions, the biggest dairy producers have tried to paint a different picture of their climate impact. The IATP report says companies like Danone have drawn attention to something they call “emissions intensity”: the greenhouse gas emissions associated with each liter of milk.

According to Sharma, focusing on emissions intensity allows dairy producers to make more milk, more efficiently, and then say they’re reducing their climate impacts. Even if the total number of cows increases (which it has), and even if cumulative emissions go up (which they have), the industry can mask these planet-warming effects by emphasizing greater greenhouse gas efficiency per unit of milk produced. For example, a 2019 report from the FAO — which was co-authored by the Global Dairy Platform — says the dairy industry’s emissions intensity, measured in greenhouse gas per kilogram of milk, declined by nearly 11 percent from 2005 to 2015.

Sharma says it’s a distraction to focus on emissions intensity. “You’ve got to reduce your overall emissions, it doesn’t matter about your ‘per unit,’” she told Grist. To her, that means producing less milk — with fewer cows.

On top of the climate change impacts, the IATP report also highlights the impacts of big dairy operations on small- and medium-sized farms. In each of the world’s four main dairy-producing regions — North America, Europe, India, and New Zealand — bankruptcy and farm losses increased between 2015 and 2017.

In the absence of governmental supply management policies, the mega-dairies that incorporate these small farms are able to flood the market with milk, often for export, driving down dairy prices and crowding out small holders or reducing their income. They are also often unaccountable for environmental pollution, from manure runoff from fields to spills from manure storage lagoons to air pollution.

To remediate the situation, Sharma doesn’t think people need to give up milk; she just wants the dairy industry to radically change its business model. “You could totally still have farms with livestock on them,” she told Grist. “It just wouldn’t be the vast quantity of livestock that we see today.”

According to the IATP report, a comprehensive set of government regulations to decrease dairy production would come with all sorts of co-benefits — for farmers and the climate. A supply management system to lower dairy output could allow companies to pay farmers better wages and allow the government to reinvest in less emissions-intensive systems of small-scale farming. These reforms could help strengthen rural economies and protect ecological systems. And ending subsidies to the largest dairy operations could free up funds that could go toward support and job training for out-of-work dairy workers.

To enact these policies, Sharma suggests consumers think beyond switching to locally produced dairy or almond milk. “In terms of individual demand, that’s just not going to move the needle,” she said. But calling federal elected officials about agriculture policy might. Holding global dairy corporations accountable is a political challenge, but Sharma is hopeful: “Political change is possible, it’s achievable,” she said. “We just have to create it.”