In Homer’s Odyssey, Odysseus must sail his ship through the Strait of Messina, between two terrible dangers. On one side, in a cave in the rocks, is a six-headed, sharp-toothed monster named Scylla. On the other side, an overhang of rocks where “the waves and whirlwinds of fire are freighted with wreckage and with the bodies of dead men.” There lies the sucking whirlpool of Charybdis.

As we pilot our ship through the 21st century, humanity faces its own narrow strait, its own Scylla and Charybdis.

On one side is the many-headed monster of energy poverty, with its attendant ill health, backbreaking labor, and wasted potential. According to the International Energy Agency’s World Energy Outlook, “nearly 1.3 billion people are without access to electricity and more than 2.6 billion people rely on the traditional use of biomass for cooking, which causes harmful indoor air pollution.” (According to the World Health Organization, solid-fuel indoor cooking kills about 4 million people a year.) This exclusion of a third of humanity from the benefits of modern life ought to be seen as both a tragedy and a crisis. Beware Scylla!

On the other side there is climate change, “waves and whirlwinds of fire,” which on our current trajectory threatens to flood, parch, starve, and uproot millions of people this century and possibly render the planet hostile to human life for centuries to come. Beware Charybdis!

The dilemma, of course, is that steering away from one side seems to bring us closer to the other. Do we get modern energy to as many people as possible, as cheaply and quickly as possible, even if it means investing billions more in large, long-lasting fossil-fuel assets (and the mining and drilling needed to fuel them)? Or do we push for the lowest-carbon, most sustainable energy path, even if it means a slower upward trajectory for the global poor? Which danger is worse? Which course is the most ethical?

This is the signal moral issue of our time, an incredibly difficult and complex set of interlocking problems, with facets and uncertainties too numerous to count and stakes too high to fathom. We’ll be talking about it for the rest of our lives. Above all, it seems to me to call for some humility. There are uncertainties and risks every which way.

The dilemma has been the subject of renewed debate in recent months. In this post, I’ll set out the broad contours of that debate. In a follow-up post, I’ll explain which way I lean, and why.

The U.N. has, alongside its Millennium Development Goals — indeed, necessary to the attainment of those goals — a program called Sustainable Energy for All. It is a plan to extend energy access to everyone who lacks it. According to the U.N., it will cost “$41 billion per year over the next five years, or just 0.06 percent of global GDP” and “require only a modest increase in carbon dioxide emissions.” Easy peasy! 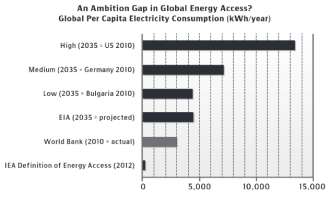 However, as Morgan Bazilian and Roger Pielke Jr. note, the U.N.’s definition of energy access, at the lowest threshold, “equates to 50-100 kWh/year per person, or about 0.5 percent of that consumed by the average American or Swede, and 1.7 percent of the average Bulgarian.” That’s a pretty paltry level of access, enough to run a few light bulbs and a radio, maybe. No wonder it won’t increase carbon emissions much — it won’t increase energy use much.

According to work done by Bazilian, bringing the entire global population that lacks energy access up to the level enjoyed by Bulgaria (on the low end of developed countries) would cost $17 trillion, and of course entail many, many more gigatons of carbon emissions.

Even the little bump up envisioned by the U.N. may increase demand more than it expects. As Catharine Wolfram and colleagues conclude in a 2012 study, when people move out of poverty they start buying energy-consuming products and appliances, which represent a comparatively large and enduring bump in consumption.

Long story short, Bazilian and Pielke Jr. say, by “energy access” the U.N. is referring to a lower level of energy use than can be justified, practically or ethically.

Why not just start with the U.N. goal of minimal energy access and build upwards from there?  They dismiss that strategy:

The sorts of policies that would make sense to get large numbers of people over a low and arbitrary threshold are very different from those that will underpin sustained growth in economies and consumption. Consider that we do not label people who live on more than $1 per day as having “economic access” and address policies toward achieving a $1.25 level, thus still leaving them desperately poor. Everyone understands that $1.25 a day is still not nearly enough. In energy, we often lack such conceptual clarity.

To get this argument in greater depth, see “Our High-Energy Planet,” a report from the Breakthrough Institute. It focuses on growing urban areas in the global South and, as you can imagine, advocates for large, central-station power plants — nuclear, hydro, natural gas, coal — and heavy grid infrastructure, which it claims are the only way to satisfy the energy demands of a modern society (which will eventually involve per-capita energy use 50 to 100 times greater than the minimum defined by the U.N.).

What about the danger of climate change posed by fossil-fueled development for several billion more people? On that, there is much handwaving, along with ritualistic invocations of the word “innovation.”

This is the perspective, basically, that encourages global policy to steer away from Scylla, even at risk of drifting closer to Charybdis. (Bill Gates is also in this camp, as is Bjorn Lomborg, as are any number of natural gas boosters.)

The symmetrical “other side” of this debate would presumably advocate for deliberately keeping the poor in energy poverty in order to avoid climate danger. Indeed, conservatives (and Breakthrough) often inveigh against this perspective. But as far as I can tell, it is almost entirely a straw man. I have literally never met an advocate for it. I’m sure if one trolls the internet long enough one can find cranks praising the nobility of poverty or celebrating “die-off.” But there is no organized social or economic constituency with any political power that adopts that perspective.

Instead, in practice, the other perspective focuses on finding ways for poor countries to leapfrog the fossil-heavy development path taken by today’s rich countries, directly onto a more sustainable, low-carbon path. (Jamais Cascio has a nice little “Leapfrog 101” intro on the late, lamented Worldchanging). As an example, people frequently cite the way the rural poor in India and China got cell phones long before anyone came to string land lines. The question is whether energy can do what cell phones did.

Leapfroggers tend to be fans of addressing energy poverty through distributed low-carbon energy solutions that do not require a centralized grid — solar panels, solar hot water heaters, biodigesters, batteries, microhydro, microgrids, and the like. They are skeptical that the grid will be extended to poor rural areas any time soon and believe that distributed energy can provide an initial and substantial step up. For an example of this thinking, see the Sierra Club’s recent report, “Clean Energy Services for All,” which is bullish on the growth potential of off-grid and microgrid solutions:

As you can see, the Sierra Club expects non-grid solutions to expand much faster than the grid and quickly serve more households, especially if they receive even a fraction of the foreign capital investment going to fossil fuel plants. (For much, much more detail on how distributed solutions can be implemented in Africa, see the World Bank report, “From the Bottom Up: How Small Power Producers and Mini-Grids Can Deliver Electrification and Renewable Energy in Africa.”)

Breakthrough responded to Sierra Club’s report with characteristic dismissiveness. Its complaint is that the Club’s plan seeks to enable the poor to consume around 10/kW a year, “0.15 percent the electricity of the average Californian,” which is “a vision of, at best, charity for the world’s poor, not the kind of economic development that results in longer lives, higher standards of living, and stronger and more inclusive socioeconomic institutions.” Breakthrough and its allies frequently use this kind of language, about how the U.N., the Sierra Club, and other distributed-energy advocates are aiming to solve global warming “on the backs of the poor,” offering them little but subsistence. (This kind of rhetoric is gleefully echoed by coal companies, which are busy yet again trying to reposition themselves as advocates for the global poor.)

I do not think this critique is particularly fair (more on that in my next post). But I do think it’s fair to say that this perspective treats dangerous climate change as something absolutely to be avoided, a fixed point around which to structure development strategies rather than just one more variable. It encourages global policy to steer away from Charybdis, at risk of drifting closer to Scylla. (UC Berkeley’s Dan Kammen is in this camp, as is Oxfam, as are any number of entrepreneurs and businesses selling off-grid solutions in the global South.)

So where does that leave us?

When the goddess Circe advises Odysseus on his coming journey, she says of Charybdis:

See that you be not there when she is sucking, for if you are, Neptune himself could not save you; you must hug the Scylla side and drive ship by as fast as you can, for you had better lose six men than your whole crew.

This would be a rather mercenary way to frame humanity’s challenge in the 21st century, but it is not entirely wrong. With climate change there is a credible threat of harming not only people alive today but generations to come — all future generations, for centuries. There are long-tail risks that could sink the entire human ship, outcomes that must be avoided at almost any cost.

Obviously, avoiding those risks should first and foremost be the responsibility of wealthy countries, which ought to shoulder the bulk of the cost. But those risks must also inform global development strategy, since the rise of the global poor will the single biggest driver of energy and emissions this century. The existential risks counsel trying, at least, to leapfrog rather than replicate the energy system industrialized countries have now.

Or so I think. But obviously I need more than a metaphor to make the case; I’ll discuss the dilemma in more detail in my next post. For now, I’m curious what you think, not just about the details but about the larger moral quandary. How should these risks be weighed? Share some wisdom in comments.

Is it better to crank up the thermostat or buy a space heater?