Donagh Heffernan was living his life, running a dairy farm in Ireland’s scenic Philipstown Cappawhite County Tipperary, when he got a call informing him that he was sexy. Ciara Ryan, the voice on the other end, had run an ad in search of good-looking, good-natured, and willing agricultural men to pose for the Irish Farmer Calendar, a project she’d hatched to help raise funds for Bothar, a charity dedicated to overcoming world hunger and poverty via livestock production.

Heffernan’s sister, Bird, had nominated her 25-year-old brother, who was at first aghast, but soon fell for the cause. He appeared in the calendar somewhat shirtless, dressed as a scarecrow stuffed with straw, and also as an artiste, bare-chested in a field with an easel.

Ryan sold out the 2,500 copies of the 2010 calendar, and popularity grew each consecutive year. This year’s edition sold more than 5,500 copies for 10 Euro (about $11) apiece, with a quarter of those to the U.S. Entries are now underway for 2016, and Ryan is talking to an American literary agent about a photo book.

“We are a farming nation and the photos include lovely country scenery, showing Ireland at its finest — and Irish men at theirs,” Ryan says, but “these farmers are very shy, so it’s difficult to get them to apply.”

The marketing of farmers is growing rapidly, not only in the U.S., but also abroad, taking the “know your food, know your farmer” tagline even further.

The British publication Farmers Weekly holds an annual contest for Britain’s Sexiest Farmer, choosing both a man and woman. Here are the 2015 winners.

In humid Georgia, a crew of fresh farmers put up a video of themselves as Hot Young Farmers as a tribute to the young farm movement. The Peterson brothers of Kansas have nearly become household names for their YouTube music parodies extolling the joy and hard labor that comes with farming. Civil Eats reports that farmers are making appearances at music festivals, from Coachella to Bonnaroo.

But those who grow our food are not always comfortable being this face-forward. Notoriously introspective and introverted, many farmers find appearing at local farmers markets uncomfortable enough. Some have tired of the over-wrought farm-to-table movement (this month’s Vanity Fair declared that it has “run amok”), feeling used.

Coming face-to-face with a farmer was rare in decades past. There was a kind of invisible line, fencing off the urban and rural. Food activist Michael Pollan’s 2007 book, The Omnivore’s Dilemma, coupled with farming’s newfound popularity, has opened the floodgates.

Evelyn Funda, a professor of English and American Studies at Utah State University, gave a TED talk late last year on farming as the “new sexy.” Funda believes that by meeting farmers and buying their products, people feel that they’re buying something more authentic, something more in touch with the soil. Yet she harbors “a love/hate relationship” with the popularity, fearing that young people “are coming into the field with the idea that farming is a panacea for an unsatisfied life [or] an unhappy career choice.”

In Williamstown, Mass., “Carhartts and Cocktails” brings Kim Wells, a local meat and poultry farmer, and Lisa MacDougall of Pownal, Vt.’s Mighty Food Farm to Mezze Bistro, where chefs turn his grass-fed livestock and her produce into appetizers and entrees. Replete with chicken soup chasers, the event started nearly a decade ago, and is intended to give farmers a night off while introducing them to the restaurant’s customers. 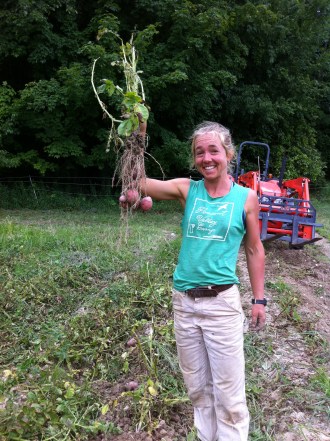 MacDougall, 30, says while such events bring farmers closer to customers, they are also venues for farmers to talk to each other about the season and share information. But she chafes at the notion that farmers are the new cool:

“Cool? Farming is so fucking hard my hands are split open and bleeding,” she says. “It is so stressful sometimes it’s amazing. I meet people and they say they’re thinking of becoming a farmer, and I ask, ‘Do you really want to do it? Building irrigation systems, doing payroll?’ I love it but it’s very hard. And then there’s the weather thing.”

Wells, 60, fondly recalls “up to early 2000, feeling like I was on a deserted island” on his 175-acre East Mountain Farm. He has cast that feeling aside, he says, but part of the beauty of farming has always been the lone figure and the fields.

Wells recently declined an invitation to nearby Williams College, where students were serving his sausages for SausageFest – an event that was also designed to encourage men to take responsibility for their actions. “I’m careful of the ribald meaning of sausage while at the farmers market,” he said, sensing a double entendre. “I was happy to sell the men of Williams College 70 pounds of bratwurst and that’s it.”

Speaking of the Irish farmers project, he says, “I would draw the line at that calendar.”

Still, some farmers relish the chance to connect with the people who keep them in business. 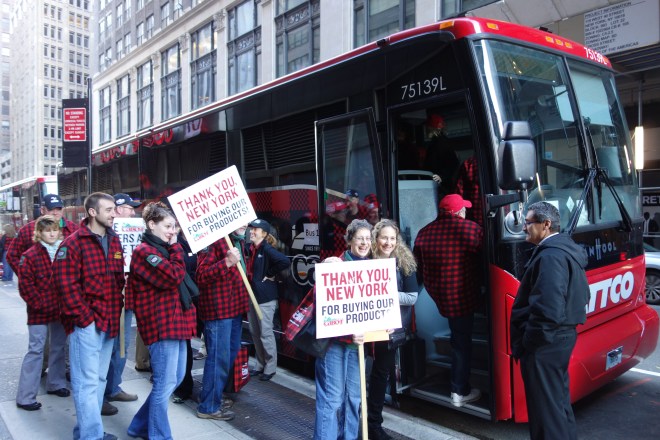 On a brutally cold day last winter, a herd of 80 rural dairy farmers spilled out into the chaotic neon night of Times Square, clad in identical black and red checkered wool coats. They carried placards reading, “New York, thanks for buying our cheese!” and rang clanging cowbells that combined with their barnyard hoots and hollers clashing mightily with the backdrop of a thrumming metropolis.

People responded, calling out: “Hey, who are you guys?” “What’s with the coats?” Some bought the farmers hot chocolate and others, pairs of gloves. Another, having met a female farmer outside a grocer in Brooklyn, dashed off to a jewelry store, returning with a gift of cow earrings.

It was the inaugural Gratitude Tour, a two-day event for members of the Agri-Mark dairy farmers cooperative who make and own Cabot Cheese. Nick Managan, a marketing and communications integrator with the 1,200-member co-op, says the impetus behind the tour was to give urban dwellers a visual connect when they, say, put a slab of cheese on a cracker.

“YES! I am a real farmer! And YES, I milk Jersey cows everyday!” said Amy Richardson, 44, of the Richardson Family Farm in Hartland, Vt., standing just outside the meatpacking district. The young workers from a nearby Google office “would lock eyes, smile, then turn around, stop briefly, and wave,” she says. The trip, she adds, was well worth the trouble.

Oh, and as for those sexy Irish farmers? They seem game, too. 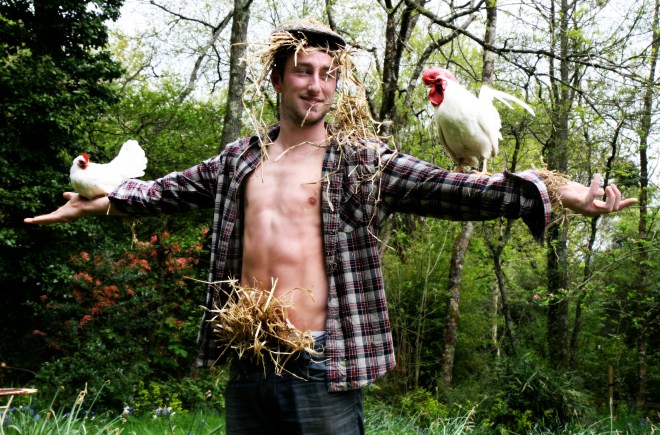 “Heya!” writes Donagh Heffernan, responding to an email. Having his photos appear in the farmers calendar has changed his life, he says. His 350-acre family dairy farm has been on national TV. He’s been tracked down for autographs.

But is farming really cool? Heffernan has to think about that one.

“Hmm,” he writes. “I’ve been a farmer all my life … A lot of me mates farm … You are your own boss, you aren’t restricted to an office all day everyday. You work your own hours and you can make your own free time …”