Try to find a patch of green in the Eastside Los Angeles neighborhood of Boyle Heights and you might get lost amid the gray pavement. With the 5, the 10, the 60, and the 101 freeways weaving through the area, it’s easy to find a paved road, much harder to find a green space.

Keep looking and you might stumble upon an oasis, Proyecto Jardín, a communal garden and local treasure in Boyle Heights. It’s where I recently found Antonio Garcia carefully tending his crops. Young gardeners turn to the 63-year old for help growing their ancestor’s crops, like hoja santa, epazote, and chinchaoyte, all readily yielding at Proyecto Jardín.

Two months ago, Garcia started growing patches of lettuce, cilantro and calabesita de arbol, often used as vessels for drinking or eating. The question now is whether Garcia will be able to continue to care for his crops, because Proyecto Jardín’s lease ran out on Dec. 31.

Garcia is right at home in Boyle Heights. More than half of the 100,000 people living there are immigrants — most from Mexico, with a rising number from El Salvador. About 1-in-3 live below the poverty line, and many suffer from cardiovascular disease and diabetes. It’s all connected here. Less money means less access to safe housing and healthy food, and less access to safe housing and healthy food leads to poor health. Proyecto Jardín, whose name translates to “garden project,” was created in Boyle Heights in 1999 to combat this cycle by establishing a hub intimately tied to community health. Proyecto Jardín is the name of the place and the organization that runs it.

But now, Garcia and other gardeners fear their hub is threatened. Proyecto Jardín’s land is owned by White Memorial Medical Center, a hospital run by the Seventh-day Adventist Church, and the lease ran out on New Year’s Eve. White Memorial said it has no plans to renew it. 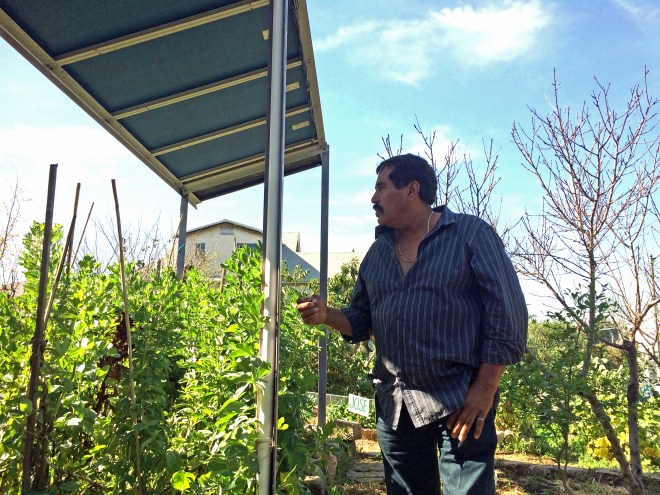 The spat between the organization that manages the garden and the landowner started when a neighbor contacted the hospital to complain about overgrowth at the site in June, according to White Memorial’s Vice President Cesar Armendariz. “We did a walk through,” says Armendariz, “and confirmed that nothing had been done in the garden for months.” The overgrowth created what White Memorial says is a fire hazard, which prompted the hospital to consider working with new partners to keep the garden going year-round. White Memorial stresses that it will not get rid of the garden itself, only that it wants to look for new partners to work with besides Proyecto Jardín. But the way Proyecto Jardín operates the space makes it exceptional.

Some community gardens involve signing up for a plot that you’re responsible for tending for a given period of time. You produce as much as you want — but part of the experience inevitably involves socializing with fellow gardeners. At Proyecto Jardín, those interactions foster a broader sense of community for the residents of Boyle Heights. The garden also operates as a communal food production space. Residents tend their individual plots but their bounty is shared with everyone.

“People work together to share in the farming, the preparation of the soil, the seeding and nurturing of the crops, and support one another as farmers,” says Irene Peña, the garden’s executive director.

Just last weekend, one of the gardeners sprained her ankle, so fellow gardeners are pitching in to take care of her plot. The communal model means seniors and those with limited physical mobility can still participate, because others will take on work they may not always be able to do.

That spirit nourishes Proyecto Jardín. From the outside, Proyecto Jardín’s communal approach is most evident twice a year, on Earth Day and on Día de los muertos, or Day of the Dead, which include ceremonies with Aztec dancers and copal burning — along with cooking and herbal medicine workshops, community theater, bike-fixing hours, storytelling, and local artisan booths. 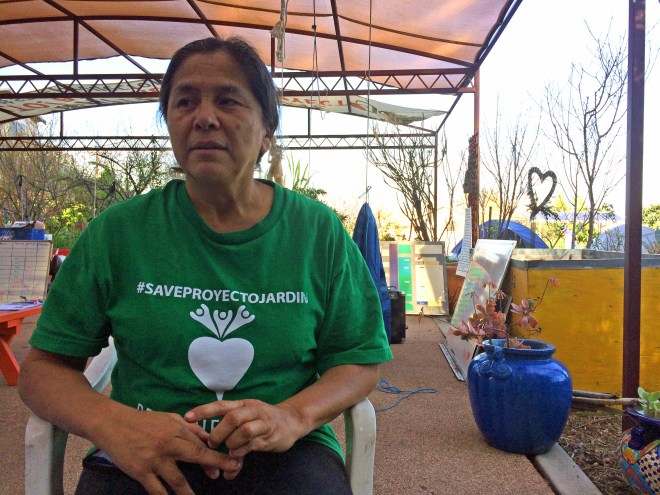 Over the past decade, the garden’s lush third of an acre has grown into a treasure in Boyle Heights. Mosaic tiles dot the landscape, birds and honeybees buzz by, and a massive cloth canopy shades an equally massive community exercise mat that hosts Zumba and yoga classes. There’s even a solar panel module that, when it works, powers a water pump and provides electricity for the place through an outlet. If it weren’t for the occasional helicopter that flies overhead, you might forget what neighborhood you’re in.

Garcia started coming to the garden about six years ago to lend his vast knowledge about farming to younger gardeners. He’s originally from the rural town of San Jose del Carmen in the Mexican province of Guanajato. “I’m grew up on a rancho,” says Garcia, “and since I was a kid, I learned everything about farming.”

Garcia patiently spent 20 minutes walking me through the precise and best way to plant and harvest chiles, fruit that people in Boyle Heights want to grow.

For the time being, Proyecto Jardín faces no court-ordered eviction notice, although it also has no lease. White Memorial has indicated that it will move forward on bringing new partners into the space; organizations that it says locals will embrace. Meanwhile, the community has set up Guardians of the Garden at Proyecto Jardín — a team of at least two people who are at the space at all times. They stand watch over their space 24 hours a day, sometimes sporting brown berets with pruning shears in hand, ready to defend the unparalleled oasis they’ve created amid the pavement.