Journalists, investors, and food industry analysts have spent a lot of time in recent weeks comparing Chipotle and McDonald’s. The former represents a new way of doing business, and it’s booming. The latter represents the old order of highly processed foods, and it’s stagnating.

McDonald’s Corp. has suffered a two-year sales slump, in part because rivals like Chipotle are picking off younger customers who want fresher food. The same dynamic is reverberating throughout the food industry at large restaurant chains and big packaged food companies. Cereal, soup and soda sales are flat or falling, as sales of organic food and brands perceived as more natural win more shoppers.

Why are people turning away from fast and pre-made food? The head of Campbell’s Soup, Denise Morrison, recently chalked it up to a cultural change, and a new generation of eaters who want transparency and healthier options. “And along with this, as all of you know, has come a mounting distrust of so-called big food, the large food companies and legacy brands,” she said.

Does this herald the decline of fast food and a shift toward a more responsible food industry? In a word, yeah. The change is real.

But let’s acknowledge two important limitations of this change before we get too excited. First, this shift has largely come as food companies cater to more affluent customers. Second, it’s a shift in degree, not kind. That is, while new upstarts like Chipotle do tend to institute more responsible practices, they’re a modification of the old model, not a radical break. We aren’t exchanging evil for good. 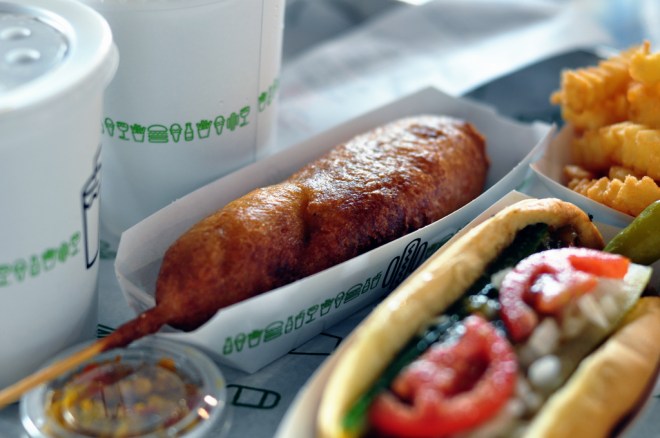 The successes of companies like Chipotle, and Shake Shack, and Five Guys, and Whole Foods — or the star-studded startup Loco-l — depend on our willingness to spend more money on food. Chipotle itself spends 35 percent of its revenue on food ingredients — a proportion that’s typical of an expensive restaurant. And a meal there will cost you about twice as much as a typical McDonald’s meal.

This interest in spending more for better food is the natural continuation of what it sometimes called the “American food revolution.” First came the rise of wine drinking in the ’70s and ’80s (we now drink more than the French), then the growth of organic sales (still holding steady at around 10 percent a year), and then the boom in expensive chocolate and coffee (and the emergence of a company called Starbucks).

Most of the gains from the economic boom of the eighties and nineties went to people at the top of the income distribution. That created a critical mass of affluent consumers. These people led increasingly busy work lives. They typically lived alone or in dual-income households, so they cooked less and ate out a lot.

In other words, fast food is becoming less democratic. It used to be that just about everyone ate the same thing; increasingly, it’s just the people who can’t afford anything better who visit the old brands. That’s not all bad, because what starts out as a luxury often gradually gets cheap enough so that everyone can afford it. This is what happened with mobile phones, and the same thing seems to be happening with food. Whole Foods has been forced to slash prices as companies like Walmart, Kroger, and Sprouts have figured out how to do organic cheaper. What initially looks like growing food inequality may eventually provide better food for everyone.

The second issue is that, while the new-generation food companies understand the importance of social and environmental responsibility, they’re still capitalist corporations facing all the same pressures as the old guys. They try to operate more responsibly to differentiate themselves from the fast-food legacy of cheap at any cost. Shake Shack pays its workers much more than other fast-food outlets. Starbucks helps employees pay tuition. Chipotle buys pigs that are allowed outside. 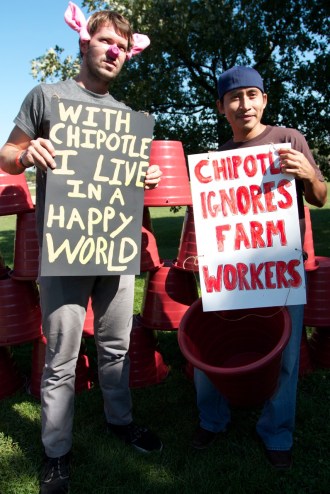 Right now, all this looks incredibly virtuous, but that’s because we are comparing these outfits to other fast food chains.

There’s an old joke that goes: How fast do you have to run to get away from a bear? The answer: just a little faster than the other guy. Eventually these upstarts will rack up their own scandals and critics — that’s already beginning.

It’s interesting to remember that McDonald’s once owned Chipotle, and eventually sold its shares for a tidy profit. As Matt Paull, a former McDonald’s CFO, said, “It should never have become a Mexican version of McDonald’s, and the longer we owned it, the higher the risk that sort of thing would happen.”

Instead, could McDonald’s become a “hamburger version of Chipotle”? There are some signs that its new CEO Steve Easterbrook — brought in after the last CEO failed to improve slumping sales — may try to do just that.

Easterbrook was previously the head of McDonald’s in the United Kingdom, where he sought to buy more locally grown meat and produce and purchased 5 percent of the U.K.’s organic milk every year. He increased sales by paring down menus, remodeling restaurants to have cleaner look, and trying to convince customers that McDonald’s could be a good corporate citizen. In other words, he made McDonald’s more like Chipotle.

It seems to me that Easterbrook is doing more than making token reforms for the angry mob. He understands that he’s living in a new world that rewards a new kind of restaurant. He told the attendees of Oxford Farming Conference that two-thirds of McDonald’s customers —

‘a growing middle class’ – are ‘increasingly discerning’. These consumers will make choices based on traditional criteria of price, convenience and value, but also changing values like quality, taste, ethics, trust, sustainability, provenance and transparency.

“Customers are looking increasingly at issues like food provenance, welfare and the impact it has on the environment,” Mr. Easterbrook said.

He referred to a survey showing that 64 per cent of people said they wanted to buy as much free range as possible and another which showed that 70 per cent of consumers consider ‘green issues’ when they go out for a meal.

The world is changing — not into a utopian planet devoid of McDonald’s, but maybe into a planet with some 35,000 kinder, gentler, more responsible McDonald’s. There will also be thousands of Chipotles and the like. The real challenge for McDonald’s, and the rest, is whether they’ll be able to win back some of the middle class. As Surowiecki wrote, “After decades in which fast-food chains perfected the ‘fast,’ can they now improve the ‘food’?”

If they can improve the food, and the ethics that influence the way eaters think about food, the world will be healthier, and so will their bottom lines.

Baths vs. showers, an eco-smackdown