Telling kids they have to eat something is not a winning strategy. I know this both as a parent of two small girls (and as an immature adult myself). If I want my 4-year-old to try her beans, I have to somehow trick her into thinking it’s her own idea.

New research suggests this phenomenon may be playing out in school lunchrooms. A paper published Tuesday in Public Health Reports found that students in two schools were actually eating less fruit and vegetables after new rules from the Healthy Hunger-Free Kids Act made the produce compulsory. The kids took more apples and salads (they had no choice) — but they also threw more in the trash.

The researchers photographed the lunch trays before the students sat down to eat, and again as they headed for the garbage cans.

The students didn’t eat a whole lot less fruit and veggies. “It was only about a tablespoon less, in terms of consumption,” said Sarah Amin, lead author of the paper. But this evidence does add some weight to the critique by the School Nutrition Association, which has argued that the new rules make the lunch programs too expensive and made the food unappealing to students. The U.S. Government Accountability Office also noticed a sharp drop-off in the number of students taking school lunches, and offered its own recommendations. 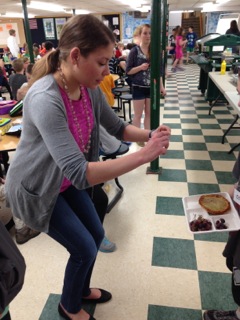 Sarah Amin snaps a picture of a student’s lunch.

Other researchers studying this policy have had different results. Harvard researchers found an increase in fruit and vegetable consumption. Utah State researchers found that young kids (first-third graders) were eating more fruit and veggies, while older ones (fourth and fifth graders) were eating less. Amin said these different results probably reflect different populations. “No one should extrapolate too much from our results. It’s just one snapshot of a bigger picture,” she said.

Despite her somewhat discouraging findings, Amin thinks the efforts to improve student nutrition are probably working. “Overall we are very optimistic,” she said. There’s more that cafeterias could do to make healthy foods appealing to children, she said, but added, “It’s also really important to cultivate whole-fruit and vegetable preferences. Kids just might need more time being exposed to these foods.”

As a parent, I’ve seen this principle in action: A kid might refuse her broccoli at four dinners, and then try it and gobble it down on the fifth try. The finding from Utah suggests that younger kids are more willing to go with the new rules, and Amin said it will be interesting to see how students who have known no other system develop their food norms.

Congress is supposed to decide whether to reauthorize the Healthy Hunger-Free Kids Act next month. A recent survey suggests that average Americans think school lunches are getting better under the law.