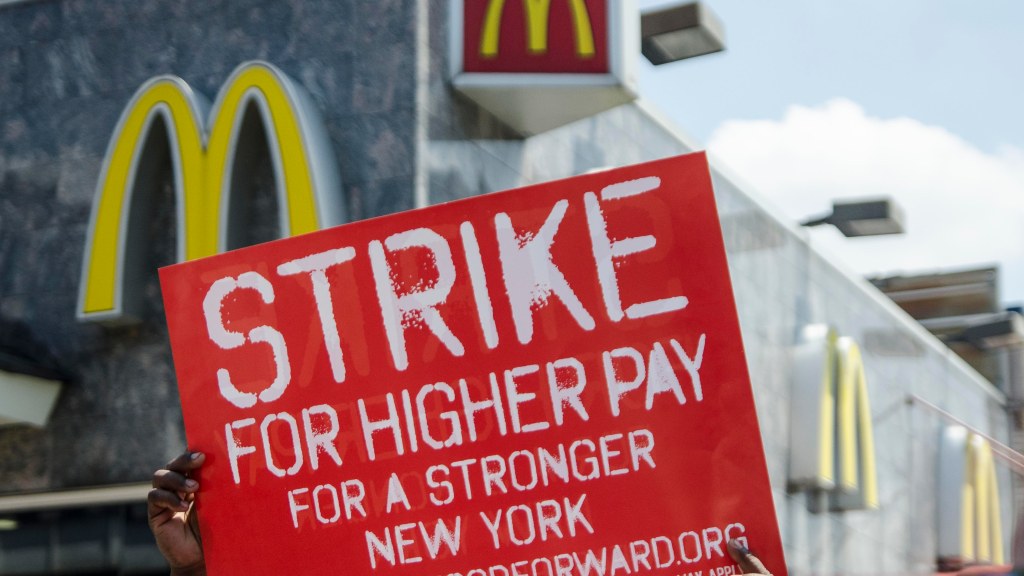 As fast food workers go on a one-day strike for higher wages across the U.S., it’s a good moment to reflect on what we are buying when we pay for cheap food.

The strength of the fast-food business model is that it is accessible to all: It’s so cheap that even the poorest people in America eat at McDonald’s. And in some cases it’s not just cheap, it’s the cheapest. If you don’t have time to cook dinner, or the means to buy unprocessed food in bulk, it makes perfect economic sense to dine out at the closest greasy spork. And so there’s an argument to be made that the poor actually need more fast food, or at least Wal-Mart-style cheap food.

But that argument fails to consider the trade-offs these companies are making to deliver those low prices. One of the biggies: Cheap food depends on low wages. This is a circular argument: You need cheap food to feed the underpaid. And you need low pay to keep prices down. As Michael Pollan put it, it is:

an upside-down version of the social compact sometimes referred to as ‘Fordism’: instead of paying workers well enough to allow them to buy things like cars, as Henry Ford proposed to do, companies like Wal-Mart and McDonald’s pay their workers so poorly that they can afford only the cheap, low-quality food these companies sell, creating a kind of nonvirtuous circle driving down both wages and the quality of food.

And in some cases workers aren’t even able to afford the cheap stuff from their employers. That was the case when a Wal-Mart store held a food drive to assist its workers, eliciting Stephen Colbert’s parody.

That’s not just a kooky outlier. According to a report from the UC Berkeley Labor Center, over half “of the families of front-line fast-food workers are enrolled in one or more public programs,” costing taxpayers “nearly $7 billion per year.” Which is pretty close to the total profits of the largest fast-food corporations [PDF].

I’m all for cheap food, if that’s the end of the story. But the price that seems too good to be true almost always relies on an ugly sacrifice deeper in the system. When you buy that amazingly inexpensive hamburger, you’re also purchasing someone else’s poverty.

Some useful links on this subject: RJ Eskow has assembled an impressive set of stats on labor in the fast-food industry. Nick Gillespie takes some of the same stats and cants them in the opposite direction. And there is such a thing as fast food with better working conditions.