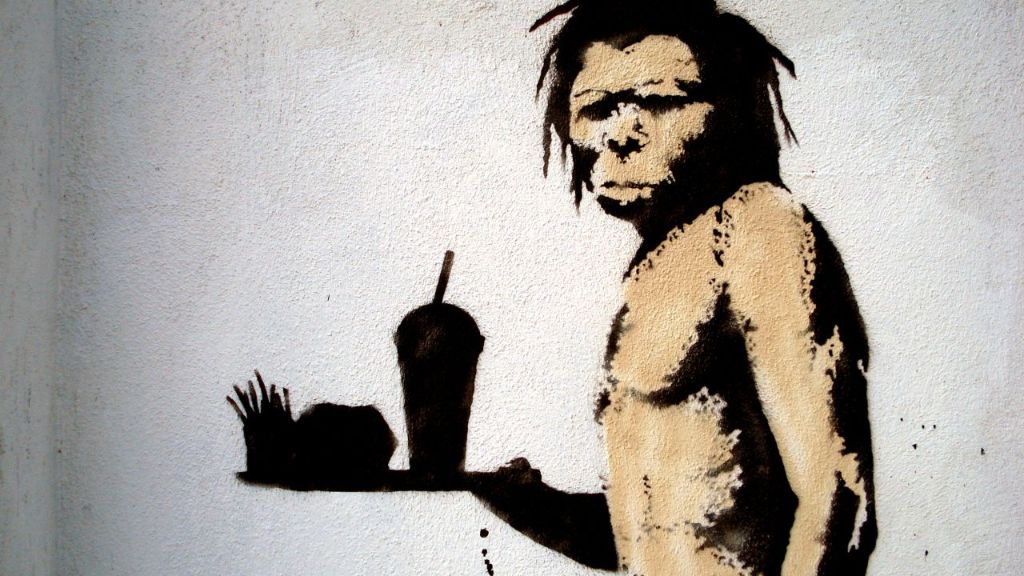 The idea of going paleo is attractive to someone like me, who feels he is living in an unhealthy, vapid world of consumerism. The sprawl of modern humanity is clearly unhealthy for earth’s biodiversity and for the stability of our climate. And it makes a lot of sense that our modern lifestyle would prove unhealthy for us: Our bodies were shaped for hundreds of thousands of years to hunt and gather — and yet we insist on sitting down all day while eating things our ancestors would not recognize as food. We keep introducing new things that don’t fit into the natural environment or the environment of our bodies.

There’s a natural yearning to backtrack — to get back to the garden. But there’s a problem, usually unacknowledged, with the whole paleo phenomenon: Going back to a hunter-gatherer’s meat-heavy diet is impossible unless we cull our population to pre-agricultural levels. There have been no reasonable proposals for achieving quick population reduction. And so we are faced with a sad reality: We can’t ever go home again.

In this week’s New Yorker, Elizabeth Kolbert wrote about putting her family on the paleo diet while reviewing “a small library of what might be called paleo literature — how-to books that are mostly how-to-undo books.”

The proposed “undo” is gobsmackingly gargantuan. It suggests that agriculture, and the civilization built upon farming was, as Jared Diamond put it, “The Worst Mistake in the History of the Human Race.” There is evidence that agriculture was, indeed, a mistake. When people started farming around the world, they became sicker and smaller. And today we are beset by a suite of diseases, from Type 2 diabetes to asthma, that seem to result from the mismatch between our Paleolithic bodies and a world where everything is super-sized, sterilized, deep-fried, ultra-wide Naugahyde. Here’s Kolbert:

Paleo may look like a food fad, and yet you could argue that it’s really just the reverse. Anatomically modern humans have, after all, been around for about 200,000 years. The genus Homo goes back another two million years or so. On the timescale of evolutionary history, it’s agriculture that’s the fad.

But agriculture is an unusual sort of fad — a fad our lives depend upon. It’s got its hooks in us. Farming allowed the human population to exceed the earth’s previous carrying capacity. The creation of synthetic fertilizers expanded that carrying capacity again. And now, like it or not, we’re stuck.

A new study, just out from the Proceedings of the National Academy of Sciences, reaffirms that meat production has an outsized impact on climate change, and that beef is the worst offender. It suggests that, if we want to reduce our greenhouse gas emissions, it would be more effective to give up red meat than to stop driving cars. This means that, “from an environmental standpoint, paleo’s ‘Let them eat steak’ approach is a disaster,” Kolbert wrote.

I expect Kolbert, who wrote Field Notes from a Catastrophe and The Sixth Extinction, would agree that it’s a disaster either way. We’re now in the unfortunate position of choosing the lesser of disasters. And when things look bleak, the idea of pressing the reset button is enthralling. When I was younger I was always hoping for radical revolution, but the more I learned about history the more disappointed I became in revolutions. When you wipe the slate clean and kick out the bastards, a new set of bastards always take over. The deep structural problems that were there from the beginning always reemerge. I eventually came around to thinking that it’s almost always better to tinker with a broken system than to burn everything down and start from scratch.

Our bodies have already started tinkering, finding ways to make do in an imperfect environment. My DNA, for example, contains a mutation that allows me to digest milk for my entire life rather than just my infant nursing days. This was a swift adaptation to the partnership between humans and cattle. Another mutation allows the production of an enzyme in saliva that breaks down starches from grains. Our bodies aren’t completely Paleolithic. Another New Yorker contributor, the doctor Jerome Groopman, has written about the wealth of evidence suggesting that, overall, humans have gotten healthier since the advent of agriculture. Yes, we got shorter and sicker immediately after we started farming, but since then we’ve become taller and healthier than ever before. It’s true that that positive trend has stalled out in the U.S. since the 1950s, but it hasn’t stalled uniformly: The rich seem to be taller and longer-lived than ever; it’s the poor who are taking a beating.

The average height of native-born American males has not significantly changed since the middle of the twentieth century. This plateau contrasts with the trends in Europe, where growth increases have continued, dramatically in countries like the Netherlands, which now has on average the tallest European men. Factors that have been considered by way of explanation of static American growth are social inequality, an inferior health care system, and fewer welfare safety nets compared to western and northern Europe, despite our high per capita income.

As usual, the real problem is political, not biological.

There’s a lot of good coming from the paleo movement. The ability to take the evolutionary perspective on human health has already led to breakthroughs (like this), and more will follow.

But watch out for the ideology that often goes with paleo purists — the assumption that the only way forward is to find our way back to Eden. Neither humans, nor the earth’s ecosystems, are fragile. We are dynamic, always changing and adapting. This doesn’t excuse our staggering recklessness, but it does suggest that we shouldn’t aim for a static vision of the past. The world has changed inalterably. Ignoring that fact leads us to focus on things like Vibram FiveFingers and steak tartare, rather than more important issues. If we really care about human health, and the health of the earth, we need to focus on inequality and poverty. Paleo is just a trendy distraction.