There is much more to “saving the bees” than spring flowers and a golden mascot. Don’t get me wrong, honeybees have very few faults and definitely need some TLC. But we shouldn’t label one pollinator as the one to rule them all.

We need multicultural pollinator communities if we want to keep eating our favorite foods. This is where the “stop spraying and plant some flowers” campaign comes in. Is it really that simple? Well, yes. But also, no. It’s easy to point the finger at one culprit, just like it’s easy to pick out one single charismatic mini-fauna for the cause.

For about three weeks in August, plantations in Australia’s almond belt are in peak bloom … and it is one of the most breathtaking scenes on Earth. It is the sort of gala display only nature can put on — the first promise of spring, cotton candy and bellinis, all rolled into one. This is the vision that sent Van Gogh into a blossom-painting frenzy. 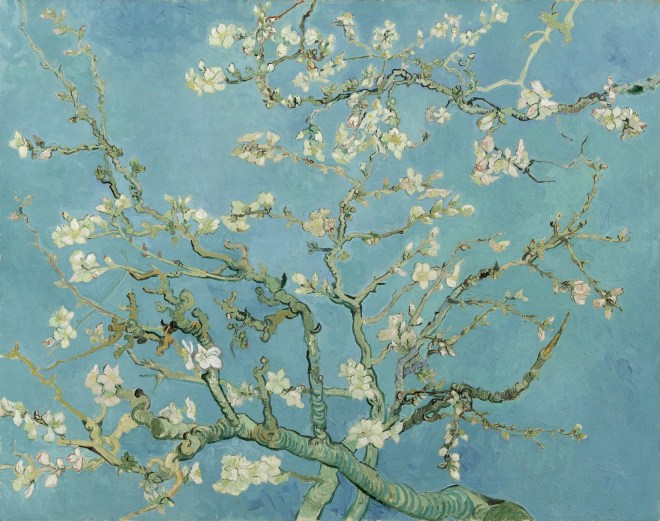 The rest of the year, it’s bleak under the almond trees. If you get there in winter, after the leaves have dropped and before the bloom, it is a stifling graveyard for undead trees. You long for tumbleweed to know the world’s still revolving.

In Australia, almonds are grown big. More than 60 percent of our commercial almonds are in northwest Victoria, just on the edge of the desert. Huge plantations, up to a few thousand acres each, create entire landscapes of neat rows of almond trees. Almonds aren’t alone — other tree crops, like walnuts, pistachios, and olives, are marching in too. Most growers remove all the grass and herbs that burst from the plantation floor. A bare orchard floor makes harvesting quicker for the mechanical sweepers that collect nuts at the end of summer. But, in a plantation of that size, it also creates a floral desert for pollinators.

This is the dilemma for monoculture ag. Harvesting efficiency and high yields per acre versus a functioning ‘ecosystem’ that supports all the animals and natural processes that help crops produce food for us. Acres of temporary blossoms and no spray for a few weeks don’t mean much if there is no permanent habitat for pollinators to make a home.

This winter, the usual truckloads of rented honeybees arrived earlier than planned to find no almond blossoms and no other food for miles. They weren’t pleased. Angry bees make a great news story, but they weren’t the only ones losing out.

We’ve all heard about the ‘other’ bees — there are more than 20,000 species in the world, getting on quietly with their pollinating business just outside the honeybee’s spotlight. But there are plenty of other insect pollinators we don’t think of, some of them dedicated and some occasional, but all just as important. 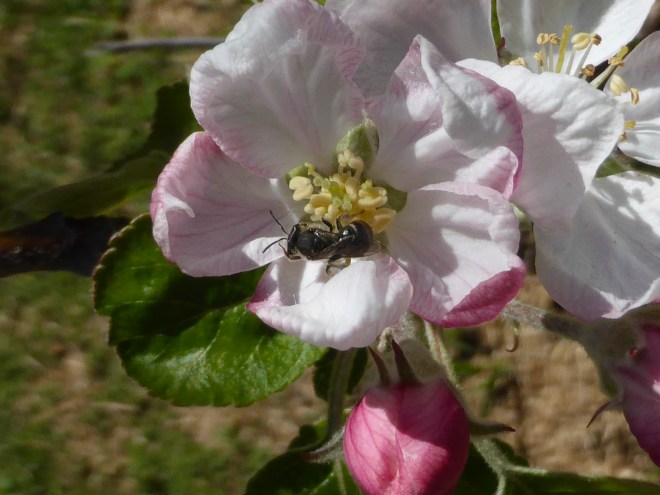 There are butterflies and moths, obviously. Flower wasps and blowflies are particularly good at pollinating too, because the pollen grains get trapped in all their tiny hairs as they move between flowers. Some ‘pests’ are even pollinators — oil palms need amorous weevils romping inside their flowers to set fruit, and our beloved cocoa is pollinated by one of the most annoying of insects, the midge.

And if anyone deserves a crown more than the honeybee, it’s the other black and gold beauties, the hoverflies. The hummingbird of the insect world, their sensational hover skills are mesmerizing to watch. As young larvae they feast on aphid and scale pests, and as winged adults they pollinate flowers. And they can’t sting. What more can you want? 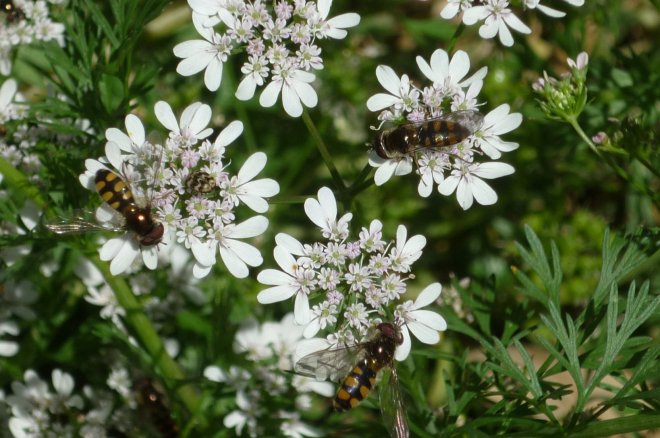 All these wild pollinators, particularly native bees, need habitats full of plant and structural diversity, which you don’t get in monocultures. I studied wild pollinators in Victorian almond plantations over two flowering seasons. In nearby natural woodland and smaller organic almond orchards, which had lots of different plants and weedy ground cover, we found a couple of hundred wild pollinators. In monoculture plantations they were far less abundant and were found close to the edges near natural habitats, where there was more open canopy cover and patchy ground vegetation.

Similar results have been found in Californian almond plantations, Italian apple orchards, and Michigan blueberry fields. Of course wild pollinators love fruit tree blossoms, but they can’t eat, sleep, and nest inside an almond blossom. They need all the other food and shelter in natural vegetation too. So they hug the edges of plantations, rather than trekking deep inside the floral desert, from where there is no return.

We now know that a lot of crops depend on multiple pollinators for optimal yields. A bunch of individual studies have shown that crops like almonds, coffee, blueberries, and sunflower seeds produce a bigger harvest when honeybees share the flowers with other wild pollinators, compared to when honeybees have flowers to themselves. Last year, a group of scientists combined data from all these studies and found that wild pollinators had a ‘universally positive’ effect on fruit production in 41 global crops, regardless of how many honeybees were around.

So, no to insecticides and yes to flowers. Reducing pesticide use, especially neonics, is a given. Insecticides kill insects. A chemical can’t tell the difference between a bee and a gluttonous aphid. Spraying at night, or waiting until after flowering, doesn’t do much either (especially if your neighbor is spraying anyway), because residue can sit around in the soil, water, or air.

The flower thing is more complicated. We often only think about pollinators in spring and summer, when flowers are out and insects are dancing in plain sight. They are still there in autumn and winter, but they are looking for places to shelter and build nests. All those piles of messy leaf litter, dead wood, and ‘weedy’ ground covers are where many insects hide over winter and feed in between crop blooms. Some build nests in soil or wall cavities, but most of them need leaves, petals, and pollen (not plastic) to line their nests with. And all of these different kinds of resources need to be within flying distance — that’s less than a mile for most insects.

If there are no nest spots, insects will either move on somewhere else or die without leaving a next generation. Either way, that means less wild pollinators around that location next year. If this happens over enough seasons, we may see long-term decline in wild pollinator communities.

So if we want almonds, blueberries, and chocolate — while also easing the pressure on overworked honeybees — we need to think long-term. Our pedantic desire to keep fields and green spaces neat and tidy needs to go. Nature doesn’t do straight lines and smooth surfaces. Throwing out spray bottles and planting flowers is a great start. But we also need to rethink farms as ecosystems, not production lines. Pollinators aren’t looking for a spring fling, they’re in it for the long haul.