Should I feel guilty about eating coal-fired pizza? 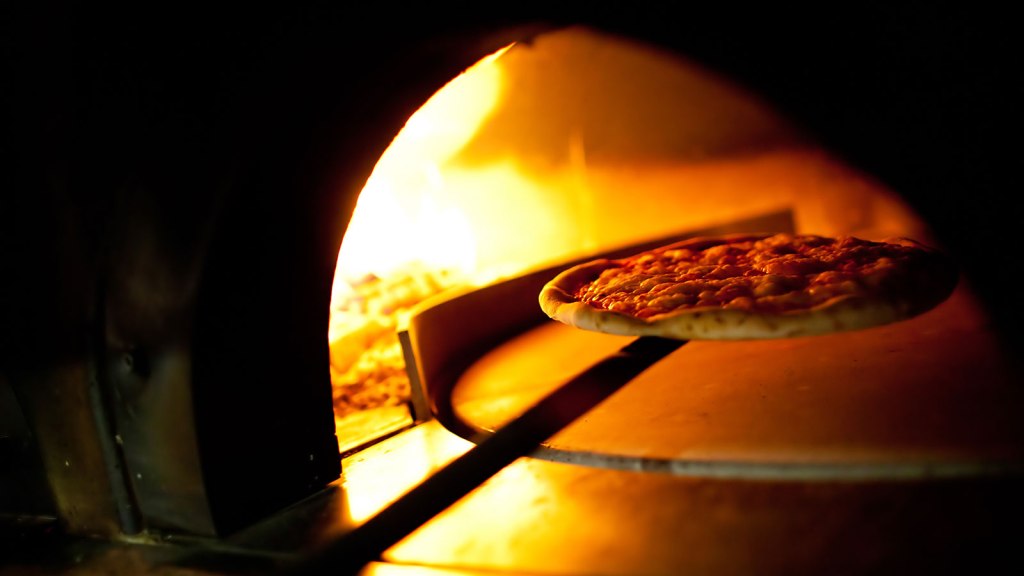 Should I feel guilty about eating coal-fired pizza?

Q. Residents in a local community are complaining about the emissions from a coal-fired brick oven used to cook pizzas at a local restaurant. What are the environmental implications of this practice for the surrounding residents?

With all due respect to Thanksgiving turkey and apple pie (and the Italians), I venture that America’s true signature food is the cheesy, crusty delight we call pizza. We serve it everywhere from kids’ birthday parties to board meetings to weddings — I mean, can you come up with a more reliably crowd-pleasing dish? — and the pizza parlor is a staple in even the smallest towns, coast to coast. So perhaps it’s no wonder that we go to great lengths to create the very best pizzas. In this case, the lengths include burning a Flintstones-era fuel to get the char on that crust just right.

I’ve had a slice of coal-fired pizza or two in my day, Ann. And I get that it’s tasty: Because coal burns superhot (we’re talking 900 degrees), pizzas cook in just a couple of minutes, producing a distinctively thin, crisp pie with a blackened crust. It’s good stuff, for our taste buds, anyway. (Aside: Many of the issues raised about coal-fired ovens also apply to their cousins in thin-crust pizza goodness, wood-fired ovens.)

Coal, in general, is not the sort of thing you’d want to ignite and then gather ’round telling stories. Among its nasty emissions: sulfur dioxide, linked to acid rain and respiratory issues; nitrogen oxide, smog-producer and lung-burner; particulate matter, the tiny bits of soot that contribute to bronchitis and asthma; and mercury, a brain-damaging metal. And that’s not even considering the carbon dioxide that burning coal produces: Almost 25 percent of the U.S.’s total greenhouse gas emissions come from coal (the vast majority of which we burn in power plants for electricity).

Coal plants are dirty — OK, not exactly breaking news. But we’re dealing with restaurant-sized coal ovens here, not power plants. And most coal-fired pizza ovens burn anthracite coal, the oldest, hardest, shiniest of all the black lumps you could find in your stocking next month. Pretty much all of our anthracite comes from Pennsylvania — not that there’s much of it. We’ve exhausted most supplies, and much of what we use now comes from reclaiming the leftovers from old mines, not digging for more.

Anthracite coal is often touted as “clean burning,” and it’s true that it produces fewer nasty emissions than the lesser grades. Still, even the best anthracite can still emit puffs of sulfur oxides, particulate matter, and other coal-related lung-cloggers. How much might be escaping from your local pizza joint? I can’t tell you. That’s because restaurants are not regulated like industrial factories are. We don’t know exactly what they’re spewing into the atmosphere because nobody is required to check.

“Coal is never clean,” says Monica Mazurek, professor of civil and environmental engineering at Rutgers. “What [these restaurants] haven’t shown is, what are the emissions from their operations? Until they can show that, why are they operating? They do pose health hazards to people who are chronically exposed to the emissions. Owners should need to show that their equipment is not emitting large amounts of particulate matter, and they should need to be in compliance at the same level [as industry].”

The citizens of your fair city aren’t the only ones concerned about this issue, Ann: Reportedly, New York City is considering requiring coal-fired pizza restaurants to install sophisticated air filters to scrub their exhaust

Another reason to care: Anthracite is the worst offender in terms of carbon emissions. The black stuff can be up to 90 percent carbon, and burning it unlocks more carbon dioxide than pretty much any other fuel, including all other types of coal, oil, gasoline, and natural gas. So even if pizza ovens are not be polluting the air much in the traditional sense of choking, sooty smoke, they are packing a punch for climate change. And that has serious implications for all of us, not just those who live downwind of Luigi Antonio’s Blazemaster Pizza Emporium.

The coal we burn to melt our mozzarella makes up a sliver of the U.S.’s total coal load: Much, much more goes toward electricity. Would we make a larger impact by focusing on greening up our power supply? Undoubtedly. But it does make you wonder how much that oh-so-thin-and-crispy slice of pizza is really worth, doesn’t it?