I’ve been in Costa Rica over the past week visiting farms certified by the Rainforest Alliance. You’ve probably seen their frog logo on tea boxes and chocolate bars; they’ve flown a batch of journalists here to show us how it’s done. My real interest, though, is in gathering material for a series looking at ways to tackle poverty through agriculture, and this trip seemed like a good chance look at how the certification of foods affects the people farming them. Despite the fact that Rainforest Alliance is footing the bill, the farmers and workers I’ve talked to have been pretty candid in their complaints.

One of the most interesting people I’ve met is Marcos Brenes, who runs the environmental programs on a big banana farm in San Alberto, amid humid flatlands not far from the Caribbean port of Limón. 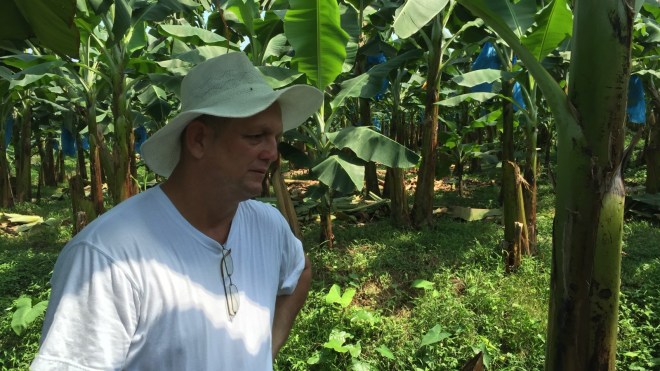 Brenes is a tall, lean man with hair buzzed down to stubble, and the deep-set eyes and crooked nose of a villain in a Western. But he wears a white hat. It’s a floppy, white sun hat. And he’s always giving people fist bumps, which doesn’t really fit with the Western villain thing.

The day I met him, he wore white pants and a white T-shirt to match the hat. On his belt was a leather case that carried a spring-loaded caliper for measuring bananas — they have to be just the right size to sell in U.S. supermarkets. Americans don’t like tiny bananas — or fat ones either.

We spent that morning following Brenes through row after row of banana trees, which send up thigh-thick stalks 10 feet tall in just nine months. The wide banana leaves provided partial shade. Above our heads ran a steel rail, and every 15 minutes or so, we had to step to one side to make way for bunches of dangling bananas headed for the packing plant. From there, they go to a Chiquita truck and then to your home. Each time the train of bananas passed, Brenes hailed the laborer pulling them to get a fist bump. On the return trip the workers rode in place of the bananas. You heard a steely rumble, and they came flying into view, picking up speed on this overhead monorail. If they were going too fast, Brenes would miss his fist bump. 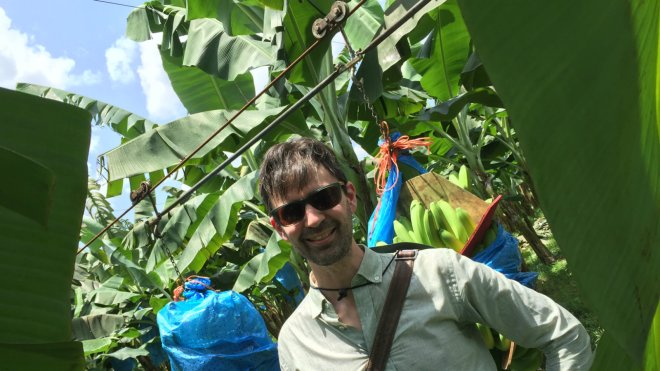 For my upcoming series, I’m hoping to get a better grasp on the way farming, deforestation, and poverty interact. Most poor people in the world are farmers. When they become desperate for money, they often cut down forests to get it. Farming done right can help solve those linked problems by providing a path out of poverty. Brenes was helping by answering my questions about the banana farm and introducing me to workers. He knows them well enough to josh around, but he clearly has more authority on the farm. No, he didn’t study agriculture, Brenes said. He didn’t go to college but used to work in the fields.

So how did Brenes get this leadership position? He finished high school. Basically, people without a high-school education work in the fields, while people with more schooling move up the ladder, or leave for jobs in the city. Again and again, workers here tell me that when a kid is good in school they stay in school; otherwise, they work in agriculture. In Costa Rica working as a “bananara,” that is, a Day-O-style banana laborer, is probably not anyone’s dream job, but it can provide money to support a family while the next generation of kids goes to school. 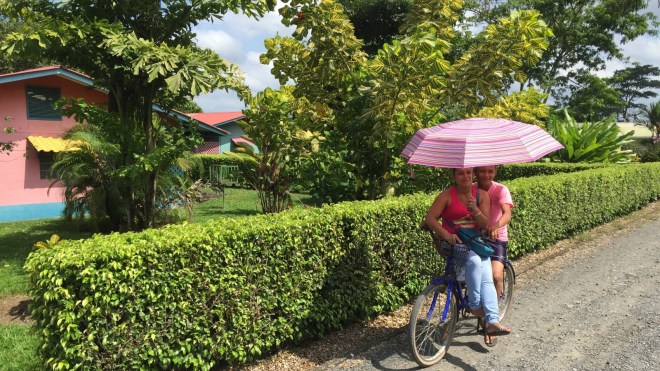 So there you go. That’s what’s behind some of the bananas you slice into your breakfast cereal. It’s hot, dirty work. But it’s also humane work that pays enough for laborers to support a family. Migrant workers from Costa Rica used to come to the United States to earn money to send home, but the country has modernized, and that hardly ever happens anymore. Instead, migrant workers travel to Costa Rica. Wages for farm laborers are still climbing, but the banana farms aren’t moving to cheaper countries because skilled workers like Brenes keep improving the farms in dozens of small ways that make them more sustainable, both economically and environmentally.

Before we drove out of San Alberto and over the volcanic mountains, Brenes shook my hand, then reversed it, hooked my thumb, and pulled back for the fist bump.