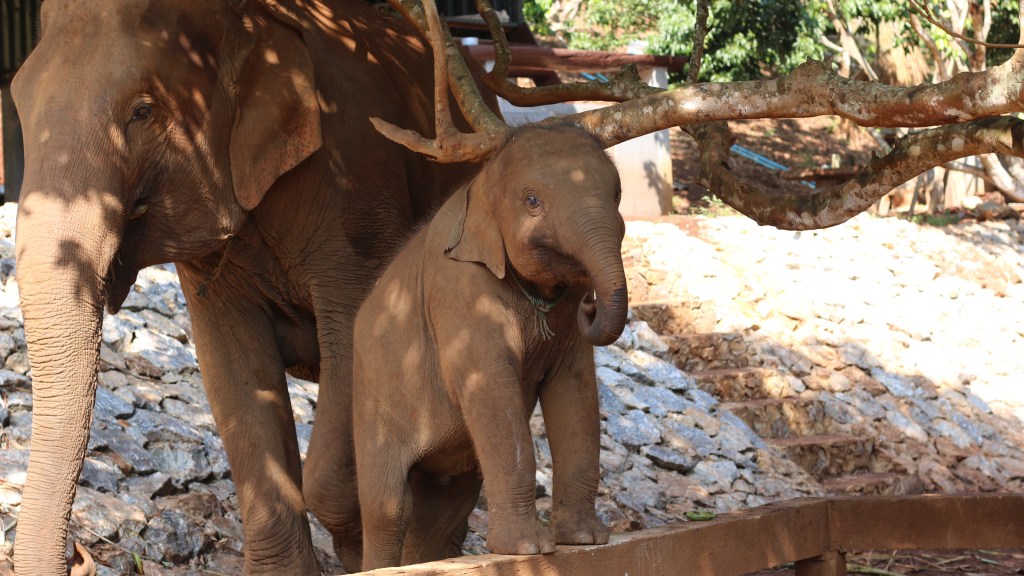 Fun fact: Elephants only sweat from their toes. And, of course, they never forget. So in a few decades, when Dumbo’s sweating his little toes off trying to keep cool in the face of climate change, he’s gonna remember who’s to blame.

That would be us — the inconsiderate roommates of planet Earth, turning up the thermostat without asking and racking up one hell of a utility bill, payable through droughts, heatwaves, food scarcity, and any number of unforeseen ecosystem changes — none of which will bode well for our big gray friends.

Even without climate change, being an elephant isn’t easy. For one thing, they weigh thousands of pounds, which means they have to spend most of their days just eating. And this isn’t the peanut-butter-and-cookies-on-the-couch kind of eating. It’s the foraging-in-the-wild-for-hundreds-of-pounds-of-food-just-to-stay-alive kind. And they don’t wash it all down with a cold glass of milk, but rather, tens of gallons of water that they have to find and chug every day.

What’s more, they do this all in Africa and Asia, where it can get pretty toasty. So in addition to sweating through their toes, elephants also have to spray themselves with water, cover themselves in mud, flap their ears around, seek shade, and radiate heat through “hot spots” on their skin just to keep from dying of heat exposure.

Then, as if all that wasn’t enough of a struggle, they have to deal with us – public enemy No. 1 for the otherwise dominant keystone species. We humans have encroached on their land with our agriculture; we’ve hunted them for their tusks; and now, we’re changing the climate in ways that we don’t even fully understand — but that will certainly impact elephants one way or another.

The problem in studying what exactly those impacts will be comes from the fact that elephants are so big, live so long (up to between 50 and 70 years), and have gestational periods that last between 18 to 22 months, making it difficult to test how they’d fare under various environmental conditions. It’s much easier to do that with, say, insects or mice (public enemy No. 2 for frightful pachyderms), which are small, short-lived, and easy to breed in a lab.

That said, there are a few obvious ways in which climate change will likely hurt elephants. First and foremost, more frequent and more severe droughts pose a serious risk for creatures that have to guzzle water all day to survive. Likewise, worsening heatwaves will be bad news for any animal adapted to a certain climate, let alone one that has upwards of 6,000 pounds of flesh to keep cool.

In a 2013 study published in the journal Ecology, a group of researchers looked at the mortality rates of a group of 1,024 elephants in Myanmar between 1965 and 2000. Their goal was to see how the animals fared under the regular climatic variability of the seasons and thus project how they’d fare under longer term climate change.

Here’s what they found: Elephants between the ages of one and 17 had the lowest mortality rate when temperatures were around 75 degrees F (24 degrees C). Higher than that, and the elephants started to die more often from heat stroke and infectious diseases. Lower than that, and they started to die more often from non-infectious diseases and generally poor health. And elephants of all ages did much better during the monsoon seasons, when water was abundant. In a given year, the researchers concluded, a confluence of unfavorable conditions in some cases doubled the mortality rate of the population.

So it looks like rising temperatures and changing precipitation will be bad for elephants. The question is: Will they be able to adapt?

One concern is that they’ll have trouble migrating to more favorable climates due to increased habitat fragmentation — again, our fault. Fortunately, that whole “elephants never forget” thing has some truth to it and could help certain populations navigate to more livable habitats. A few years ago, a group of researchers looked at the survival rate of calves in three clans of elephants during a nasty drought in Tanzania in 1993. They found that two of the clans had migrated during the dry spell, and that the calves in those clans were much better off. This, they concluded, might have had something to do with the fact that these clans had older matriarchs who lived through a previous drought years earlier and remembered where to go to find water.

Still, we’re the ones putting elephants in this predicament in the first place, so we shouldn’t leave them alone to navigate their way out.

If you or someone you know is a student who would like to learn more about how to protect elephants, then check out the International Sustainable Development Studies Institute. The organization has a summer program in Thailand that gives students hands-on experience working with elephants and learning about both their history and future in Southeast Asia.