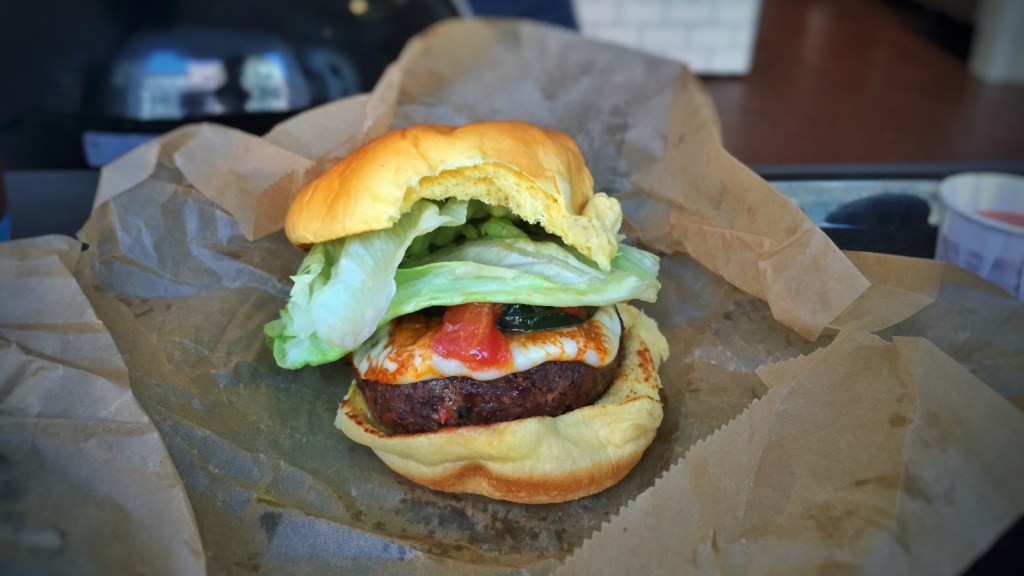 The Superiority Burger. It earns the name. T.Tseng
Food

The foodie revolution has finally come to veganism — and if you care about the climate, that’s good news.

Two of the hottest burgers on the New York City food scene right now are vegetarian or vegan, and they’re changing the way people think about meat-free food. “One of the biggest problems with bringing vegan food to the mainstream is people think of it as hippie food: crunchy, granola, and sprouts,” says Chloe Coscarelli, the chef behind one of the burgers transcending that stereotype.

Brooks Headley is the chef behind the other. He opened Superiority Burger last June in a tiny space below street level in the East Village. It makes a quinoa-based veggie burger — vegan if you skip the cheese — that GQ in December proclaimed “the best burger of the year” for 2015. “Superiority Burger,” the magazine wrote, “shatters the notion that meatless burgers are nothing more than frozen cardboard vessels for fungus or tofu.” It’s rich and gratifying. In another piece, GQ enumerated the burger’s virtues: “Maybe the best thing about N.Y.C. chef Brooks Headley’s raved-about Superiority Burger — better even than the nutty patty, the roasted umami-bomb tomato, the fact that no cows were harmed in the creation of this sandwich — is the texture. The bun squishes. The lettuce crunches. The pickles snap.”

On my own visit, I found all of those claims to be true, and the other dishes were just as remarkable. The “Sloppy Dave,” a vegetarian sloppy joe, is a perfect blend of soft, chewy tofu and a spicy tomato sauce, with sweet and crunchy fried onions on top. The charred broccoli salad is crisp and tangy. And everything on the menu costs less than $10.

Coscarelli’s vegan cafe By Chloe — which opened in Greenwich Village last July — has also been getting great press. When I went by on a Friday afternoon, the line was so long that it ran out the door. New York magazine’s Grub Street food blog called By Chloe “2015’s most surprising restaurant success story.” The Huffington Post praised By Chloe’s “veggie burger that will have you forgetting the beef version,” noting its “perfect trifecta of great ingredients, excellent toppings and can’t-miss sauces.” By Chloe’s menu is extensive, including a pesto “meatball” sandwich, air-baked french fries, and “mac ‘n’ cheese” made with sweet potato–cashew “cheese” sauce and shiitake “bacon.”

Both eateries are confronting and overcoming a major challenge for vegetarian, and especially vegan, casual food places: appealing to a mass audience. Coscarelli explains her approach: “You need to make it familiar. People need to realize it’s hearty and delicious. Veggie burgers are fun because they show people you can eat something hot and really bite into it.”

Though she’s only 28, Coscarelli has been a pioneer in hedonistic vegan cuisine for years. She is the only vegan chef to have won the Food Network’s Cupcake Wars, which she did in 2010, and she has published multiple recipe books. By Chloe is so successful that Coscarelli and her business partners are opening an affiliated vegan bakery next door, two additional outposts of By Chloe in Manhattan, and one each in L.A. and Boston. The restaurant’s explosive popularity and growth is such that the website VegNews ran an April Fool’s item last week joking that By Chloe is planning to open outlets in all 50 states by May 1.

This is a welcome, long-overdue trend. Too often, when you try to find vegetarian food (never mind vegan), your options are frustratingly limited — even in New York City, home to a larger population and wider variety of restaurants than anywhere else in the country. Paradoxically, the farm-to-table, organic, or locavore restaurants that are all the rage in cities such as New York usually offer limited menus that completely lack vegetarian entrees. Meanwhile, the vegetarian outlets tend to fall into three narrow categories: a few high-end, delectable but expensive bistros like Dirt Candy, uninspired pan-Asian restaurants that just substitute tofu — or, worse, fake meat — into unimpressively rendered standard dishes, and hippie cafes that serve things like, well, tasteless veggie burgers.

Making vegan and vegetarian food that carnivores can enjoy is essential if we want to reduce meat consumption. And doing that is an essential part of any comprehensive plan to lower greenhouse gas emissions by the enormous amount needed to stave off catastrophic climate change. Meat, and to a lesser extent dairy, have much larger carbon footprints than plant-based foods. Livestock is responsible for 14.5 percent of human-caused greenhouse gas emissions, according to the U.N. Food and Agriculture Organization. The average American eats around 270 pounds of meat per year, second only to Luxembourgers and three times the global average. Realistically, getting most Americans to give up meat altogether is unlikely in the foreseeable future. Getting them to eat it in moderation is a more attainable goal.

For that to work, restaurants need to offer vegetarian options. That’s why the rise of delectable, casual vegetarian food is so important: It makes being a vegetarian easier socially and more appealing gustatorily. And it makes eating less meat easier for the omnivore who wants to shift toward a less carbon-intensive diet, is watching her cholesterol, or just seeks variety.

“We’re seeing so many [non-vegan] people come through the door and not really care about labels of vegan or not, but just coming because they like the food and the way it makes them feel,” says Coscarelli. “There are a lot of vegan restaurants that I enjoy but I wouldn’t take a meat-eater there. The goal is to create a place where [vegans] could come with a mixed group of friends.”

Both By Chloe and Superiority Burger eschew the hectoring earnestness that, at least stereotypically, characterizes vegetarianism and animal rights activistism. The ingredients are presented as matter-of-factly as at the average burger joint. It doesn’t feel like you’re eating it because it’s good for you or for the environment. The New York Times, taking note of By Chloe’s punny dish names (“Kale us maybe”) and cute decor, observed, “By casting veganism as effervescent pixie lifestyle rather than moral crusade, By Chloe may be stealthily recruiting more followers to the cause.”

Other chefs are being recruited too. Like artists in any genre, chefs take inspiration from one another. The advances in vegetarian food at one restaurant can help trigger the spread of tastier veggie options elsewhere. By Chloe’s guac burger, for example, inspired dumplings using the same ingredients at an East Village dumpling house. Food & Wine called the dish “a fully vegan dumpling that even carnivores will love.”

Being able to eat delicious, umami-rich comfort food that is planet-friendly and heart-friendly thanks to the absence of animal products is a good and important thing. It will be even better when the vegan cuisine efflorescence extends beyond the burgers-and-fries genre. Here’s one good sign: A vegan Persian restaurant just opened in Bushwick, Brooklyn, drawing a rave review from a local blogger.