The hunter sits in the crook of large tree, 15 feet off the ground. If he’s still, a passing human — or animal — might not notice him at all. For three days, he waits. His vigil requires, in addition to extreme patience, snacks and a bottle to pee in. Eventually, a young male deer wanders past. Silently, swiftly, the hunter swings an ancient-looking bow and arrow across his torso, pulls back until the string is taut, and lets go. Contact. The deer sprints away and falls. He’s dead in seconds.

This scene was captured on video by Shawn Woods and posted online, where it has been viewed nearly a million times. It’s one of dozens of videos Woods has produced of his hunting expeditions, as well as tutorials on how to make your own weapons and process your catch. In one video, Woods demonstrates how to render bear fat into lard; in another, his wife makes pie with black bear lard and berries their sons picked that afternoon. 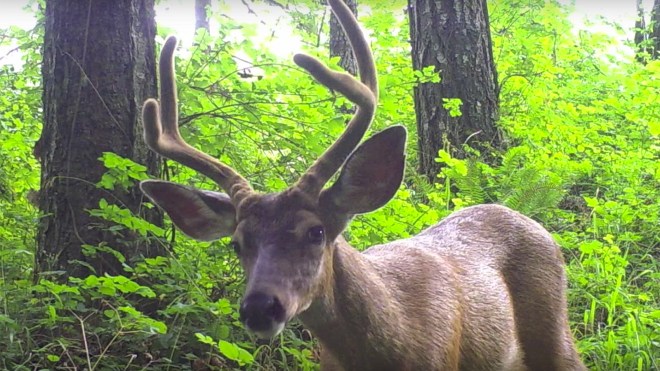 Woods, a wildlife ecologist, grew up hunting with guns. But as an adult, his interests in history and hunting merged when he discovered primitive archery. Woods is fascinated by the way ancient people survived without modern conveniences, so he taught himself to make tools out of things he finds in the wild. He shapes blocks of obsidian — a hard, glassy rock found in his native Oregon — into points using stone and bits of antler.

Woods also makes bows out of yew trees, bowstrings out of deer tendon, fish hooks out of bones, daggers out of ash limbs, and axes out of copper. For this, Woods was inspired by Ötzi, a 5,000-year-old mummy found in the Italian Alps with a similar tool. Woods has visited the site where the body was found — a video shows him hiking up the Alps with his visibly pregnant wife at his side. He also recreated Ötzi’s last meal: bread made from einkorn wheat harvested by hand, deer cooked over an open fire, and stinging nettles steamed over rocks.

His commitment to using everything he kills has led Woods to some unconventional experiences — like eating rat. After discovering that rodents were killing his pheasants, he constructed a simple trap by propping a heavy rock up on sticks. When his prey glanced against a trigger, the rock dropped for an instant death.

“I removed the hair by throwing it on the fire because there are a lot of flies and parasites,” he says. “Then, the skin slips off and you can remove the intestines and roast it on a fire. If people didn’t know what it was, they’d say it’s good meat.” 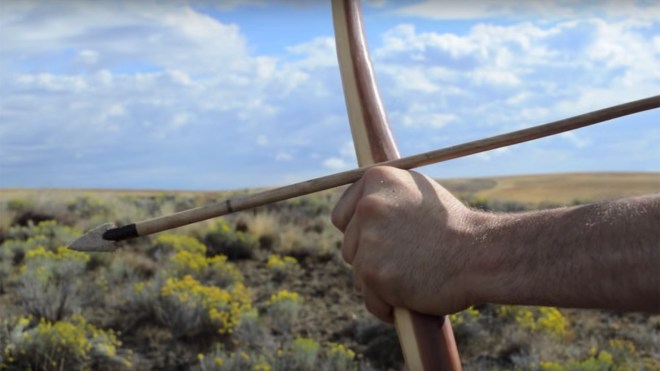 Ten years ago, Woods worked in a processing plant for a major producer of “natural” chicken. After six months, he says couldn’t eat factory farmed chicken anymore. “Some of the things I saw …” he says, trailing off.

The ecological damage of farming is significant, especially when it comes to climate change. Agriculture accounts for about 15 percent of annual greenhouse gas emissions — and half that comes from livestock. Industrial meat production is also a leading source of water pollution, deforestation, and antibiotic-resistant bacteria, commonly known as “superbugs.”

Clearly, there are problems with the meat most of us are eating, but a decade after working in that chicken plant, Woods has opted out of industrial agriculture altogether. Now, he raises, forages, and butchers most of his family’s food. And, of course, he hunts.

Woods only bags an animal about once every three years. With a rifle, you could sit in a recliner 300 yards away and still hit your mark; with a bow, it’s more like 30 yards. In that range, animals can detect even the slightest movement. “You can see the deer’s eyes,” Woods says. “You can see them breathe.” 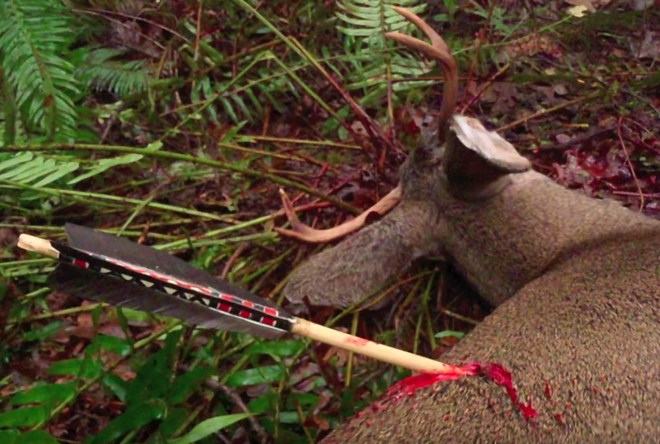 Not many of us are prepared to kill our own dinner, but for Woods, the end product is only part of the appeal. He takes as much pleasure in the process — in collecting and creating. “Killing is only a very small part of hunting,” Woods says, “but it gives you a whole new perspective to walk through the woods and look at it as a grocery store.”

We all can’t live like Woods. While industrial food production comes with a host of moral, environmental, and humanitarian problems, it’s not realistic to expect the 7 billion mouths on this planet to hunt and raise their own food. Most of us need grocery stores to survive. But this means that by the time our meat gets to our plates, it’s so processed that it hardly seems part of a once-living being. While we’re buying plastic-wrapped, boneless, skinless chicken breasts, the hunter is perched in his tree, with one foot in this world and one in the last, both bow and camera ready, and waiting.