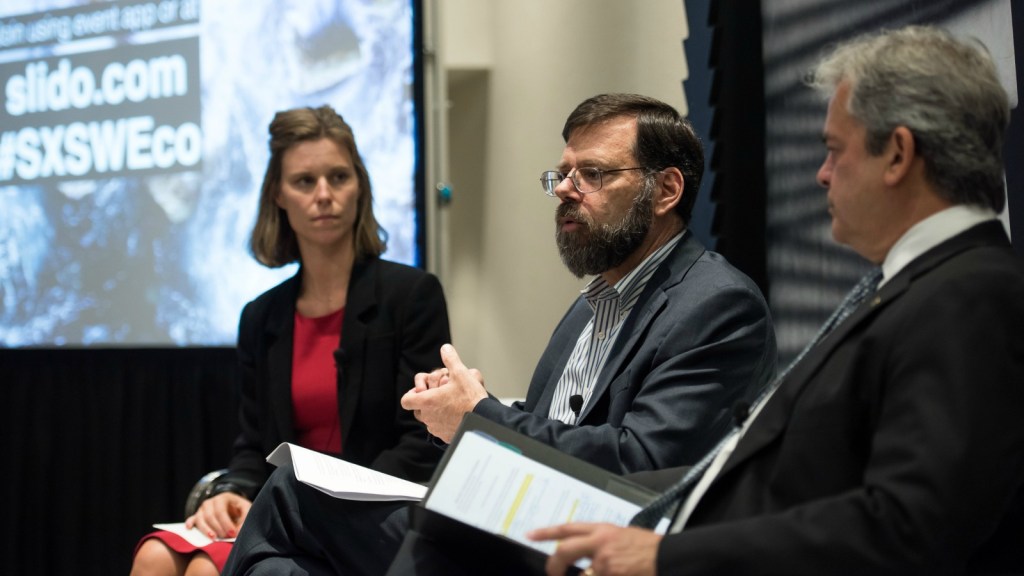 There’s a term that’s getting thrown around a lot in regards to the international climate deal reached in Paris late last year: “Trump-proof.”

As in, is it possible to ensure that a President Donald Trump couldn’t “cancel” the breakthrough agreement and derail global action, as he’s pledged to on the campaign trail?

One of the key players in that effort said this week that a commander-in-chief determined to scrap the deal would mean trouble — no matter how much effort he and his colleagues put into protecting it.

“A president opposed to global action would make enormous difference,” says Jonathan Pershing, a scientist-turned-diplomat who took over as the top U.S. climate envoy this spring. It’s hard to overstate the concern of his international counterparts about the outcome of the election, he says.

“What the U.S. does matters to them,” Pershing told Grist in an exclusive interview this week at the SXSW Eco festival in Austin. And it’s not just his fellow diplomats who care. Pershing’s daughter is currently serving with the Peace Corps in a remote region of Senegal. “Her entire village is aware of who our candidates are.”

Some good came from that anxiety, though: It helped drive ratification of the Paris deal in record time, so that it now goes into effect just before Election Day.

Pershing is confident that reversing all of the Obama administration’s progress on climate wouldn’t be easy for a Republican president. Obama has put in place a host of climate-related rules, from auto fuel-efficiency standards to reducing power plant emissions, that would take time to undo. Says Pershing: “Turning away from those regulations is going to be a pretty tall order.”

And a president opposed to Paris might face pushback from a powerful player: Wall Street. Industry and investors have already begun to adapt to, and in some cases embrace, global efforts to decarbonize the economy.

“The market wants policy consistency so investors can have confidence,” Pershing says — and worldwide, from China to India to the European Union, policymakers are focused on actions to reduce carbon emissions. A United States determined to move in the opposite direction would disrupt that consistency. (If elected, Trump would be the only head of state in the entire world to reject climate science.)

Pershing attended SXSW Eco this week to tout a program created by Bloomberg Philanthropies and the State Department to help leading cities around the world exchange information about their climate efforts. It’s yet another sign, he says, of how efforts will continue to move forward on climate despite U.S. presidential politics or congressional inaction — because city leaders worldwide recognize the risks and the need to respond immediately.

Grist spoke to Pershing shortly after Hillary Clinton campaigned with former Vice President Al Gore in Florida this week, linking the increased damage from disasters like Hurricane Matthew to climate change. Pershing worked for Clinton during her time as secretary of state, when he was the No. 2 climate envoy under Todd Stern, and said he saw up close that she has a strong and genuine commitment to fighting climate change — contrary to the perceptions of some climate hawks, who preferred her primary opponent, Bernie Sanders.

“She’s wanted to deal with it for a long time,” Pershing says — and in fact, Clinton created the position that he now holds, taking over from Stern in April, because she wanted someone at the State Department entirely focused on international climate action. “Her drive pushed a lot of it forward.”

Representatives of nearly 200 countries are preparing to convene again next month in Morocco — starting the week of the U.S. election — to take the next steps in implementing the details of the Paris Agreement, including rules to ensure global compliance with the commitments made last year. Those talks could take on a very different tenor depending on the Election Day results.

Regardless of the outcome, Pershing says, no U.S. president — denier or not — is going to be able to ignore the growing impacts of climate change or the demand for action from the global community. “We’re all in this together, truthfully.”