At Café Gratitude, a vegan eatery based in Los Angeles, the menu is aspirational. Dishes have names like “Bountiful” (quinoa pasta), “Transformed” (two corn tacos), and “Liberated” (pad-thai kelp noodles). Vegans, naturally, have flocked to Café Gratitude — even Beyoncé has eaten there — but in the past week, the café has gone from darling to reviled, and its owners are reportedly getting death threats from the very crowd that used to love them.

It started when Matthew and Terces Engelhart started Be Love Farm in Northern California. The couple — vegetarians for 40 years and vegans for 12 — needed manure for their produce, so they started raising livestock. And then began eating that livestock. Matthew wrote about his decision in March of 2015. Here’s an excerpt, uncovered by Los Angeles Magazine:

30% of the world’s surface is grasslands, Grasslands need herds of ruminants to thrive, when they are removed, the grasslands degenerate into desert. Desertification is violence against all species including humans. The conflict in Syria and Iraq can be easily tied to desertification, mismanaged soil. Herding ruminants are our best tool to restore fertility to the earth, keep the earth covered, and reverse desertification and climate change. If I knew of a better or even another solution, I would choose it. We need cows to keep the earth alive, cows make an extreme sacrifice for humanity but that is their position in God’s plan as food for the predators. Cows maintain the grass, predators maintain the herd by culling the weak and sick. We can be part of that sacrament. Sacrifice is part of life. As in the passion of Christ, we all have to spill our blood for humanity to know the Father. The cow’s sacrifice was been ordained, ours we must choose.

At the time, no one payed much attention. Vegans kept getting their Happys (mediterranean raw wrap) and their Awesomes (eggplant parmesan panini) at Cafe Gratitiude, seemingly none the wiser that their money went into the pockets of meat eaters. But last week, scandal emerged after race-car driver, environmental activist, and noted vegan Leilani Munter broke the year-old news to Twitter:

Vegans erupted, posting scathing takedowns of the couple and starting a boycott on Facebook. Inevitably, the one-star Yelp reviews poured in. 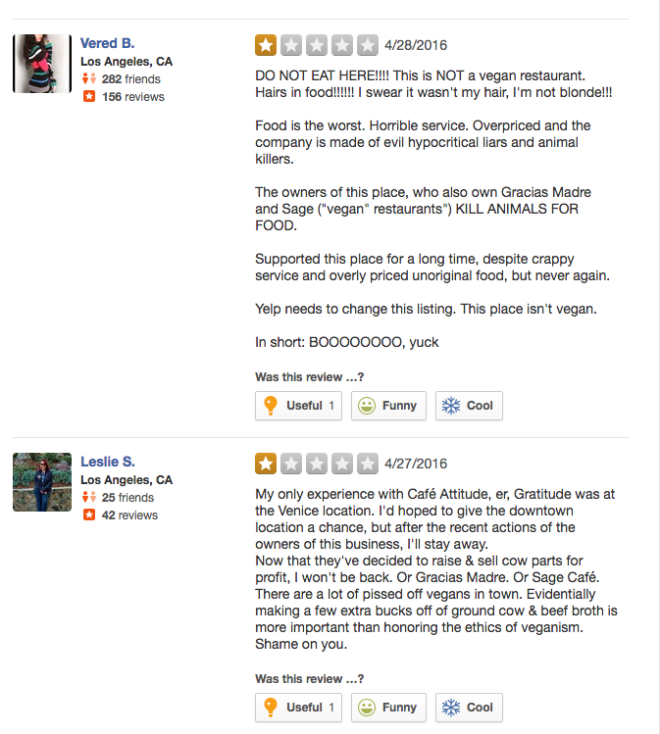 The Engleharts, for their part, are not backing down from their decision to start eating meat. “I am allowed to change my mind,” Matthew Engelhart told the Hollywood Reporter. “And by the way, I never even told them what my mind was. All I told them was it’s a vegan restaurant. And it still is! And it always will be!”

As for whether vegans will forgive the Engleharts for their changing their mind, it seems unlikely: There’s a protest planned for Friday.