When she started working on her book Vitamania, Catherine Price thought she was just going to be writing about the science of vitamins. But it turned out that history of that science also told the story of our obsession with perfecting nutrition. It’s a tale that everyone should know — especially those interested in shifting the American diet to something that’s healthier and more environmentally sustainable.

A disclosure here: I’m friends with Price, a science writer. But I’m not the only one who likes her book; The New York Times called it an “absorbing and meticulously researched history.” Price and I chatted recently about the limits of our understanding of vitamins — and how accepting that ignorance can actually help us to kick the miracle-cure habit and just make better decisions.

Q. You hear a lot these days that natural foods are better, that nutrients are lost in food processing — historically, has that been true?

A. Well, vitamins tend to be sensitive to the processes that stabilize foods. You can destroy a lot of the vitamins when you process with high heat, or remove them in milling. For instance, the nutritional disease beri beri became a problem in the 1870s when you had new milling technology to get the husk of the rice off. That provided white rice, which people seem to prefer, but the husk actually has a lot of nutrients, including thiamin, and other vitamins and unstable oils that are probably good for us. You were left with a very purified product that then ended up giving people deficiency diseases.

But I think that we can go a little too far in thinking that things that are “natural” are better, or that if you ever eat a cracker you are going to give yourself some horrible deficiency disease.

Q. In terms of high heat: I know vitamin C is destroyed in pasteurization. Is that what you are talking about?

A. Vitamin C is destroyed by like, everything, so that’s a tough one. One thing that comes to mind is breakfast cereal. If you want strange shapes — Froot Loops, Apple Jacks, and all that — you have to start with really refined grain. So you have finely ground grain, and sugar, and then water or something that makes it like slurry. One of the techniques they use is called extrusion, which allows you to make all these little shapes. But it’s very intense both in terms of pressure and heat. Different vitamins are sensitive to different things — some are sensitive to heat, some are sensitive to oxygen, some are sensitive to light — and they break down along the way. You can add vitamins back in, but you have to be careful that those aren’t also destroyed, so they’ll often spray them on at the very end.

If you are eating your cereal for the vitamins — which, I think a lot of us, oddly, do, we’re so convinced cereal is good for us — you should really drink the milk, because a lot of the vitamins come off.

Q. One of my favorite parts of the book was all these really awful descriptions of nutrient deficiency diseases — and the thing that struck me was that these things were once mysteries. They didn’t know if they were being caused by a virus or demonic possession, or what — it took a long time to pin down the association with food. And when people would found the vitamin cure for scurvy, or beri beri, or pellagra, they went back to acting like we had nutrition totally figured out. So I’m wondering, what’s the chance that people are currently suffering from some sort of chronic nutrient deficiency? Are there chemicals out there that keep us healthy that we don’t know about? 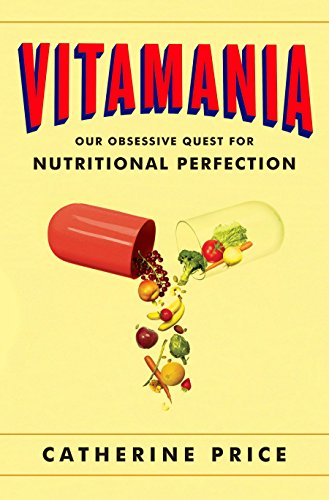 A. It’s an interesting question because in the cases of those deficiency diseases that you mentioned, they are so dramatic: You’ll die without the vitamins. So once people got their minds around the concept of nutritional deficiency diseases, that led to the discovery of vitamins. It took a really long time to even think of the concept of a disease caused by something absent from food. Once they figured that out, the changes were so dramatic that we know for sure that scurvy is caused by vitamin C deficiency, and night blindness by [lack of] vitamin A.

It is interesting to wonder what the long term effects of our diet are. We do see type 2 diabetes and certain kinds of cancer associated with western diets. Is that because we are deficient in something? Or is that because we are eating too much of detrimental things? I don’t know if anyone fully knows the answer to that.

Q. It’s like, we’ve figured out all the nutrients needed to survive and reproduce — as you say, the dramatic stuff — but there could be chemicals, that we don’t know about, that make us healthier, or chemicals that, in excess, hurt us. And it seems like we need a new science, or framework, for figuring that out, because it’s just so complicated, and contingent on so many different things.

A. I guess so — if we really wanted to get to all the details. At the same time, it seems so obvious that what we are eating in America is not doing good things for us. So it’s kind of funny when we are asking, is this phytochemical — say, resveratrol — going to prevent whatever the latest thing is that resveratrol’s supposed to prevent? Just take a step back. If you eat crap, like a lot of us are doing, it causes health problems: obesity, diabetes, cardiovascular problems, whatever. So instead of obsessing over lycopene in a bottle of ketchup, why don’t we step away from the ketchup and eat a tomato? I don’t know that we, the public, need to understand the details to improve our health.

Q. That was another really interesting thing I learned from your book: There’s this long history of people, often legitimate scientists, who would take some little detail of evidence and push it to its breaking point, and become highly successful health gurus.

A. We just have such a desire for firm answers and magic bullets. Anytime anyone comes along with what seems like certainty, it’s really compelling. I’ve listened to a lot of talk radio in the last few weeks while waiting to do interviews for this book, and there are so many ads for super beta prostate or whatever, hawking products and promising certainty. It’s so appealing! It makes everything sound so easy! We’ll always be attracted to gurus because we want easy answers, and that’s exactly what they sell.

Q. There is a tremendous yen for nutritional certainty. Now that you’ve written a book on it, has it changed your way of dealing with the uncertainty of nutrition science in your own life?

A. I think so. Discovering the very basic things about vitamins that we still don’t know was at first terrifying, because I was supposed to be writing a book about them. But once I took a step back I realized that was a really important lesson to take away for nutrition as a whole.

If we don’t know all the details for something as prominent as a vitamin, how could we ever think that we’ve figured everything out about nutrition? Vitamins, in terms of their connection with deficiency diseases, have a straightforward cause and effect. But all these other thousands of chemicals in food seem to be much more subtle in how they work and have many synergies with each other we don’t understand. It made me see how hubristic it was to think we could figure that out.

But in a practical sense, maybe that’s not such a big deal from a consumer’s perspective, because we do know enough to have a sense of what is good for us. Instead of seeming boring and fuzzy, accepting uncertainty started to feel really interesting and scientific.