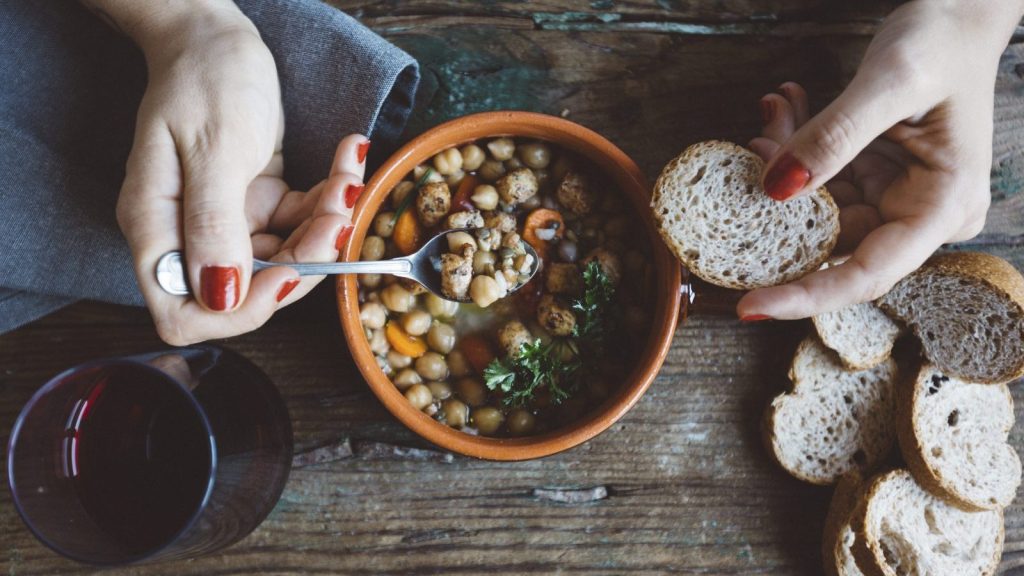 American restaurant diners don’t usually blink before adding an extra 15-20 percent tip onto their bills. In recent years, San Francisco’s eaters have even (mostly) grown accustomed to paying up to 6 percent extra for dinner to offset the cost of the city’s mandated healthcare program. Starting in January, at a smattering of eateries, California customers will see a new fee tacked on to their bill, though this one’s optional: One percent more to make their meal climate friendly.

The surcharge will fund a new program called Restore California, which is managed by the nonprofit Zero Foodprint. The initiative will funnel the money it raises into grants for farmers engaged in carbon farming — growing food with a focus on replenishing the soil’s health in order to increase the amount of carbon dioxide it can sequester.

“By supporting soil health we can absorb carbon pollution from the atmosphere,” California’s Secretary for Environmental Protection, Jared Blumenfeld, stated in a press release. On top of that, carbon farming, also known as regenerative agriculture, has been shown to improve water quality and protect against drought, Blumenfeld added. (For a more in-depth discussion of the opportunities and limitations of carbon farming, read my previous piece and listen to our Bite podcast episode on the topic.)

California already offers grants to farmers and ranchers who employ carbon farming practices — like planting cover crops and hedgerows — through its Healthy Soils Program, which is funded through the state’s cap-and-trade plan. Restore California, a private-public partnership, will work in parallel with this state-sponsored initiative.

Restore California, like Zero Foodprint and its parent organization the Perennial Farming Initiative, is the brainchild of Chef Anthony Myint and his partner Karen Leibowitz, co-founders of the restaurants Mission Chinese Food, Commonwealth, and The Perennial. Myint is also the 2019 winner of the Basque Culinary World Prize for his efforts to help restaurants reduce their carbon emissions.

Myint and Leibowitz became more serious about soil health while running The Perennial, which served sustainably minded fare in San Francisco’s Civic Center neighborhood starting in 2016. The duo wanted to publicize the greenhouse gas emissions associated with restaurant practices and ingredients, but they didn’t want to bum people out to the point of complacency and despair. They opened The Perennial in part as an experiment in storytelling through cuisine. “We were thinking about how the restaurant business can talk to people about food and climate in ways that are still delicious and hopeful,” Leibowitz explained. “One of those ways was to highlight farmers and ranchers who were building healthy soil, and sort of take farm-to-table to the next level.”

One of The Perennial’s dishes, “Beef Tartare and Grasses,” sourced its meat from a ranch affiliated with the Marin Carbon Project, a pilot program to convince fields to absorb more carbon with the help of compost application and managed grazing. The beef came decorated with cut up wheat grass, wheat grass oil, and flowers that were typical of coastal range land, like lavender. On the side, diners received a piece of toast made from kernza, a perennial grain with deep roots that helps restore prairie land and is especially effective at drawing down atmospheric carbon dioxide.

The Perennial shuttered in early 2019. But Myint and Leibowitz were only beginning their campaign to trumpet the role of restaurants in curbing global warming. “It was really exciting to learn that food not only can be a part of the climate crisis, but also can be a potential solution,” Leibowitz said. They were encouraged by California’s creation of the Healthy Soils Initiative in 2017, which devoted $7.5 million a year towards carbon farming (the fund has since increased to $28 million). But the grant applications were onerous and complex, as a Los Angeles Times op-ed noted.

Leibowitz and Myint conceived of Restore California as a parallel, and ideally streamlined, grant program. The state’s restaurant industry generates $97 billion in sales a year. If only 1 percent of restaurants add the 1 percent surcharge to their bills, the partners reasoned, they could drum up an extra $10 million in additional funding for regenerative agriculture.

To help kick things off, the Golden Gate Restaurant Association, a San Francisco trade group, will add Restore’s 1 percent surcharge to all of the menus of businesses participating in this year’s “Restaurant Week”; the normal $40 per head fixed price has become $40.40 as a result. Restore will pass along the funds raised during the week to El Sobrante’s MESA Farm, which plans to add trees on three acres of its grazing land; Straus Dairy Farm, which will plant willow trees; and Spade and Plow Organics, a farm in Santa Clara County hoping to incorporate compost application and cover crops on more of its acreage. According to the California Department of Food and Agriculture, all of these practices can contribute to healthier soils.

The restaurant association’s policy manager, Chhavi Sahni, says the Restore initiative is in line with San Francisco’s culture of valuing food production that respects the environment. “We all know climate change is real and it’s happening,” Sahni said. “We’re at a time where we really have to focus on all we can do.”

Beyond Restaurant Week, Myint and Leibowitz have implemented the surcharge in all of the restaurants that have completed the Zero Foodprint certification. Which means Restore’s coffers will largely draw from the patrons of some of the state’s toniest dining establishments, including the Bay Area’s Chez Panisse, Flour and Water, Atelier Crenn, Benu, Cala, and Mister Jiu’s. The array is “a little high-end right now,” Sahni reflects, “which speaks to that clientele who have the extra resource.” It goes to reason that those who can afford to think about the carbon cost of their risotto are those who don’t think twice about paying $40 or $50 per person for dinner.

But Leibowitz and Myint have plans to broaden the program’s scope. “We’re trying to set up a way for everyone to get involved at a price point that is proportionate to their means,” Leibowitz said. Myint dreams of popular fast-food joints like Shake Shack one day picking up the cause. He imagines the burger chain advertising that a few cents of each ShackBurger go towards helping “reverse” global warming — “that’s a huge marketing win,” Myint argues, “and it kind of comes at no extra cost to the company.” (As we’ve reported, the concept of using cows to counter climate change, while potentially possible using the right ranching practices, also raises questions given beef’s high methane emissions and carbon footprint.)

Ultimately, Myint and Leibowitz seethe Restore funds as a boon for everyone, from the farmers who feel incentivized to take better care of their soil to the chefs whose ingredients are more nutrient-and-flavor-packed as a result to customers who breathe in cleaner air before they dine. To ask any one small business to take a huge responsibility for the climate change impacts of a meal would be untenable, Leibowitz said. “But for each of us to contribute a little bit toward changing the expectations of our culture, about how food is produced, how food is consumed, what food costs — I think we can all move in that direction.”

How do diners feel about springing an extra few cents towards this vision? Myint has experimented with a 3 percent surcharge at Mission Chinese Food for more than a year now, and only one person has opted out, he said.

“When we initially added this, we were a bit nervous, but I don’t believe we’ve gotten any pushback,” Golden Gate Restaurant Association’s Sahni said. “One percent is quite modest,” she added.

Brandon Kirksey, chef and co-owner of the new Mission District pasta joint Great Gold, has had a slightly different experience. The restaurant implemented the surcharge in August. But after about a month, when too many customers had asked about it “in a negative way,” or requested to have it taken off their bill, the owners opted to remove the charge from the bottom of the menu and raise their prices by 1 percent instead. Since diners already pay 6 percent extra for city mandates, “having that additional surcharge on there I think made a lot of people feel uncomfortable,” Kirksey said. “People get a little stand-offish when it comes to change.”

Kirksey and his team remained dedicated to Restore’s mission. Great Gold still sends 1 percent of its revenue to Restore California at the end of each quarter, and its menu includes a note signaling the restaurant’s commitment to Zero Foodprint’s “efforts towards carbon neutral farming” and a link to the nonprofit’s website. “Ever since the verbiage changed, people are more excited to learn about it,” Kirksey said, “rather than complain about the fee.”