Some basic economic forces are driving mid-sized farms out of existence. First, food prices keep falling. “Ever since World War II, agricultural commodities have trended steadily down,” agricultural economist Otto Doering told me. We are on a technology treadmill: Farmers get a new tech (like hybrid seeds), increase productivity, and make money. But then all the farmers get it, they all produce more, and prices drop, Doering said. Those new technologies cost money, so farm costs go up while food prices fall, leaving farmers with smaller and smaller profit from every bushel they harvest.

Farmers can either buy land and get bigger, drop out, or get an off-farm job to supplement their income. Forty years ago, when Doering came to Purdue University, 800 to 1,000 acres could give a farmer in Indiana a good middle-class income. Now, it takes 2,000 to 3,000 acres to support a commodity farmer, he said.

You can spin this positively: Technology is making farmers better, and allowing them to grow the same food at much lower prices — in the same way we celebrate Moore’s Law or the falling price of solar panels, there’s a lot of good in this. But it also means that people are pushed out of farming, especially in periods of crisis. And that’s often incredibly painful.

Harvest Public Media has given us permission to republish this piece by Amy Mayer about the great farm crisis of the 1980s. When I heard it, I wanted to share it here as a reminder that there is a human cost to change. It’s a powerful thing to listen to Mark Kenney’s voice — even though he’s not giving specific details — and realize that years later it’s still hard for him to even mention that period without choking up. (See also Liz Core’s interview with Kenney here.)

Lessons from the farm crisis, by Amy Mayer 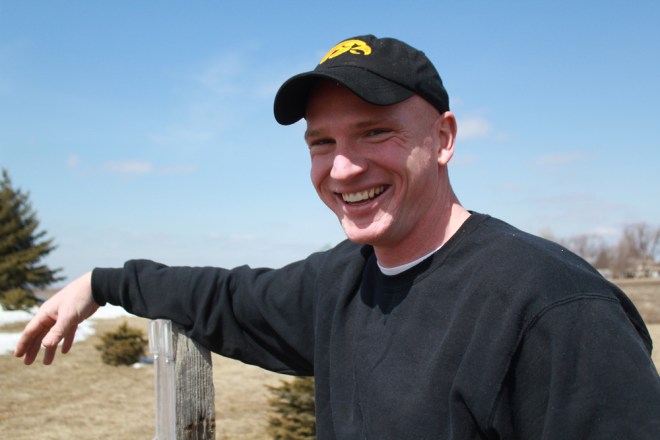 This post is part of My Farm Roots, Harvest Public Media’s series chronicling Americans’ connection to the land. Click here to explore more My Farm Roots stories and to share your own.

I met Mark Kenney on his family’s farm in Nevada, Iowa, when I was working on a story about farmer taxes. He turned out to be perfect for that — a farmer with a keen interest in spreadsheets.

Kenney and his family lived through the farm crisis of the 1980s, when the bottom dropped out of the U.S. economy and collapsing global food markets forced many farmers out of business. He surprised me, though, when he started describing how lucky he was to grow up during a notoriously tough time to be a farmer — and became choked up by the memories.

“At the time, it didn’t feel like a whole lot of fun. The ’80s for farmers in Iowa and the Midwest and throughout the country were not looked upon as, ‘Jeez those were great times,’” Kenney said. “But they also taught us a lot of lessons.”

His family’s farm, run by Kenney’s father and grandfather, survived, but he watched with them as neighbors lost their farms.

“A lot of good farmers went out of business and that’s tough to see,” Kenney said, “In some cases through no fault of their own. It’s just — caught up in a bad economic time.”

Now a farmer himself, he knows the extraordinary effort it takes to keep a farm running. And that’s in the good times.

“I’m even more thankful for my grandparents, my parents, my uncle because of the hard work they put in during those times,” Kenney said. “[They] gave us the opportunity to stay on the farm and for me to make my livelihood from the farm, too.”

As the farm crisis spiraled out of control and farmers all over the country struggled to stay afloat, it was hard for many to imagine a future on the farm.

“Commodity prices were depressed, land values kept falling, and it didn’t seem like there was a whole lot of reason to be optimistic,” Kenney said. That left many of his generation uninterested in farming.

Even though he wanted to farm, he saw clearly the need to have a variety of skills. His background includes working at a company that financed agricultural equipment and earning a master’s degree in agricultural economics before returning to be the fifth generation to farm his family’s land, with his father and his brother-in-law. (Kenney’s niche on the farm, he said, is spreadsheets and financials.)

Talking about the 1980s is emotional for Kenney, but he said lessons learned as a young boy still stay with him today. The crisis fostered in him an appreciation for what he has.

“I’m thankful for it because I kind of know, don’t forget that those times could come again,” he said.

And the hard times also demonstrated to Midwestern farmers their intractable place in a global market.

Now he uses a smartphone every day to check the markets.

These charts show why corn is king