From farmworker to farm owner: One man's story of the American dream 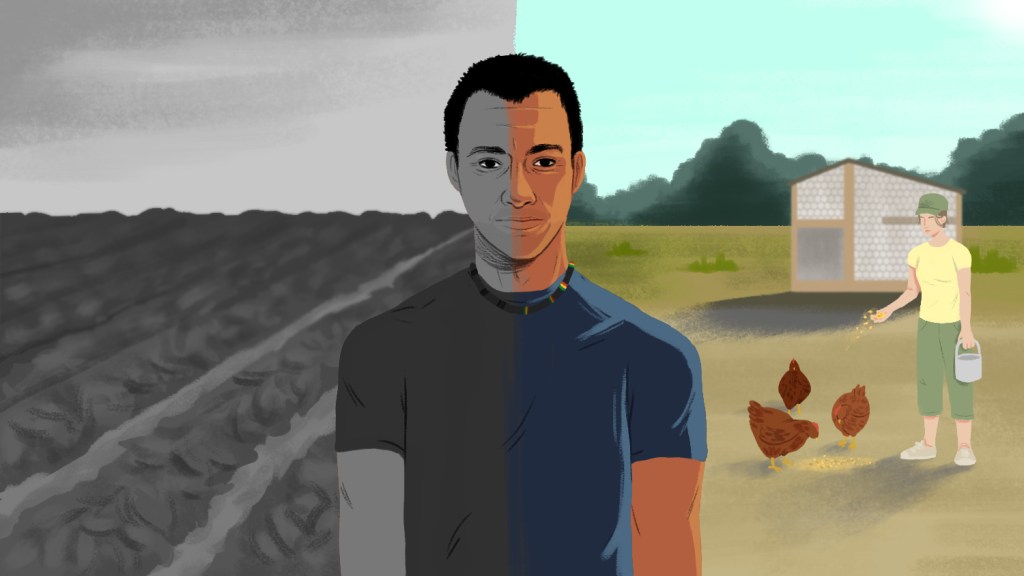 From farmworker to farm owner: One man’s story of the American dream

Angel* has lived in the United States for 15 years, and in that time he’s managed to make the very difficult transition from farm laborer to owning his own farm — living out a truly classic American dream. That dream, however, is at constant risk of being taken away from him: Despite devoting half of his life to the American farming system, Angel is not a legal American citizen.

When we talk about farms and the food system, it’s a bit perplexing that the question of who is picking the tomatoes, milking the cows, and feeding the chickens isn’t a part of every single conversation. If you’ve been following this series, you’ve probably realized that agriculture is really, really difficult work — and farmers hire extra help just to bring that work to a remotely manageable level.

Without these farmworkers, we simply wouldn’t have the tomatoes, the milk, or the eggs — but we have no idea who many of them are. That’s because a significant percentage of farmworkers in the United States are unauthorized — approximately half in the crop farming industry alone, according to USDA data. More than a third of all farmworkers are not U.S. citizens, and that figure tends to be underreported due to fear of deportation.

In 2000, at the age of 15, Angel* left his hometown in Oaxaca, Mexico, to come to the United States illegally. He had helped out with his family farm since he was a toddler, and, seeking better pay and more opportunities, he crossed the border to work on American farms. Because he looked even younger than he was, he had a hard time finding work — and when he did, he made just $5.75 an hour, the minimum wage for farmworkers at the time. He started out planting peppers on large, conventional farms, which he says was tough, repetitive work with long hours — and incredibly lonely.

“When you’re 15, and you are alone, you [aren’t] depend[ing] on anybody else and you have to support yourself,” he told me. “The fact of being alone in this country without any of my family or friends that I grew up with just made it very difficult.”

Ten years after he first came to the U.S., Angel met his wife, Caitlin*, an American citizen, through a fellow farmworker who brought him to one of her soccer games. They married shortly thereafter and started a small farm together in California.

“We started from basically from nothing — it was just an experiment,” Angel says. “We started raising 25 baby chicks for meat and 13 laying hens just for ourselves. But then we were having so many extra eggs at the end of the week and we started going to small farmers markets, and then we started selling out of everything that we were producing.”

Four years later, the farm — which primarily produces pastured chickens and pigs — now grosses between $100,000 and $200,000 in annual sales, and Caitlin and Angel are actively working on diversifying the operation to include more vegetables and grains as well as sheep and goats. That may sound like a lot of money, but the operating costs of farms are so large that it’s not even enough to pay Angel a living wage. In fact, his salary as a farmer is less than he made as a farmworker. Caitlin helps support the family with a full-time job off the farm.

While Angel does the majority of the farm work himself, he explains that he faces a constant conundrum when it comes to hiring labor to help him on the farm. He and Caitlin are committed to paying a fair wage, but they can’t afford to pay that for the 50-60 hours per week that a migrant farmworker would want to work. As a result, they primarily hire American citizens from the local community to work on the farm, but they don’t have the experience or the skill that migrant farmworkers have, and aren’t as efficient. Angel has, however, hired some migrant farmworkers over the life of the farm.

And while he’s now the employer instead of the employee, he still shares the migrant workers’ deportation anxieties. To this day, Angel does not have a visa — and it might be the very farm he’s built that could keep him from getting one.

Caitlin explained to me, in a matter-of-fact tone belying the gravity of the situation, that Angel’s income is tied to the farm — and because they’re still a startup business, most of it is reinvested in the farm itself. As a result, they can’t prove that he wouldn’t be financially dependent on her, which is a crucial factor in getting a visa for an immigrant spouse.

“There’s kind of tremendous consequences to not being able to get it, though,” she adds, “Because there’s a 10-year bar on people who have entered the country illegally. The idea that he could have to go back to Mexico for 10 years — our whole family would have to leave the country and we’d have to shut down this business that we’ve been working so hard to build.”

Until Angel becomes a citizen, he can’t leave the country to visit his family in Mexico and come back to California. But it’s important to him to keep the business that they’ve worked hard to build intact: “I want to keep farming. We know that we are doing something important in our community.”

For Angel, who helped pick coffee and feed farm animals as a toddler on his family’s farm in Oaxaca, being able to raise his 18-month-old son on a farm is the real dream.

“I can see that [our son] is already enjoying [being] outside a lot, and seeing the animals and touching them and feeding them,” he says. “I think that’s going to make him be a better person in the future … Of course there’s going to be so many things that he can do, that I can be teaching him, but this is one of the things that I want to teach him for now.”