There’s a note of evangelical glee in some of the predictions of bee extinction. Vanishing bees are a sign of the end times. We puny humans, we think we have it all under control, little do we know that spaceship Earth has entered a death spiral — we are so screwed! The bees are dying and we have no idea why! It suggests we simply don’t understand the larger forces destabilizing our biosphere. And because we don’t know the cause, people are free to fill in their least favorite aspect of modernity: GMOs. Chemicals. Unrelenting connectivity (cellphones, electromagnetic frequency transmission). Climate change. Even wind turbines. (Believe it or not, people like UFO theorists and Scott Walker are worried about them.)

It helps that the facts of colony collapse fit perfectly with apocalyptic thinking. The beekeeper goes from hive to hive, and finds them nearly empty: The bees aren’t dead; they’ve simply vanished. Each colony collapse is like a little warm-up for the rapture.

But there’s one big problem with viewing the vanishing bees as an apocalyptic canary in the planetary coal mine: Like unfulfilled predictions that the world will end, bee collapses have happened over and over again. For instance, try to guess the date of this passage, written by Colorado beekeeper R.C. Aikin. One day the colonies were strong and the bees clustered thickly; the next:

The bees just vanished, and were nowhere to be seen. If they had died in or about the hive, possibly we might have found out what was the matter; but they seemed to evaporate, hence I have called it “evaporation.” The loss of bees was so complete that many colonies had not half a teacupful of bees left, where, less than a week before, they covered brood in three combs and upward. The queens, it seems, were always left; but the workers so completely evaporated that the brood perished.

Aikin wrote that for Gleanings in Bee Culture in 1897. He was describing events that occurred in the spring of 1891. In 1915, there was another collapse; Charles C. Mann recently wrote about that one in National Geographic:

Rapid bee die-offs have been recorded for centuries, but the catastrophe that confronted the young monk was unprecedented. A mysterious disease had wiped out almost every apiary on the Isle of Wight and now was devastating the rest of England.

In a paper entitled “Colony Collapse Disorder: Have We Seen This Before?”, entomologists Robyn M. Underwood and and Dennis vanEngelsdorp found many records of bee-death. 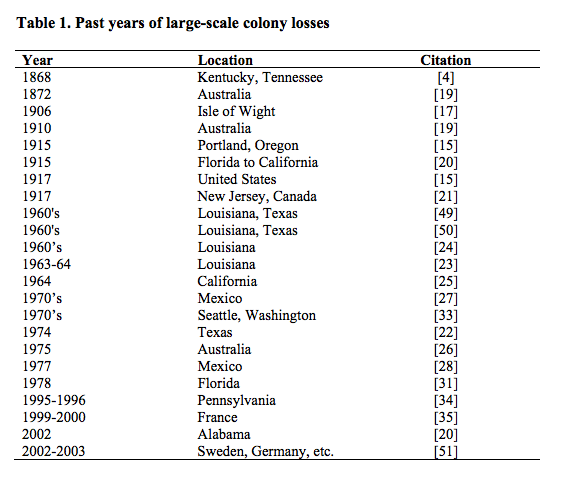 The recent epidemic of colony collapse, first reported by beekeeper Dave Hackenberg in 2006, had ended sometime around 2009. But beekeepers are still suffering heavier than usual losses. This time the problem is more widespread than previous events, probably because the global bee-system is interconnected — it’s a globalized crisis for a more globalized era. But it’s not completely global: Colony collapse has affected beekeepers in the United States and Europe, while the total honeybee population around the world is actually increasing.

And even in the U.S. and Europe, where beekeepers are suffering the heaviest losses every year, populations haven’t exactly cratered since 2006. That’s because it’s pretty easy to replace bees. Beekeepers buy new queens and then scramble to build up new colonies — it’s a lot more work and a lot more expensive to keep growing replacements, but like any domestic animal, the population depends more on people than on the health of the animal itself. Often, news stories will correlate colony collapse disorder with the decline of hives in the U.S., but the number of hives is determined by economics.

Beehives in the U.S.UN Food and Agriculture Organization

All the rhetoric about the extinction of honeybees is just hype — none of the serious scientists working on this thinks honeybees are vanishing. But the hype isn’t necessarily a bad thing: It’s gotten people interested in the pollinator problem — and it really is a problem, even if it’s not an existential problem. Beekeepers around the country have lost their livelihood. And even if the honeybee deaths don’t presage the collapse of the biosphere, they may well signal the collapse of other insect species.

It’s easy to track the population of a domestic species like our European honeybee, but it’s harder to tell how the hundreds of obscure wild species are doing. There are more bee species than birds and mammals combined, vanEnglesdorp notes. Some have failed to show up in biologists’ surveys recently. The Franklin bumblebee of northern California hasn’t been seen since 2006. It’s hard to keep track of all these little bugs, but it’s likely that some of the same things hurting honeybees are also hurting wild insects.

At this point, scientists suspect a combination of four major factors: parasites, disease, pesticides, and dwindling habitat. And it would be useful to figure out which of these is most important. One putative cause is a newly popular class of insecticides called neonicotinoids, which go inside plants — a little bit even gets into the nectar and pollen that bees eat. The European Union has placed a two-year moratorium on the use of neonicotinoids to see if that will solve the problem. But without neonics, some farmers are spraying other insecticides — and because these are sprays rather than internal (systemic) pesticides, they are more likely to kill not just crop-munching insects but also innocent bystanders.

The real question isn’t whether neonics kill bees (they clearly do at high enough doses); it’s whether they are worse than the alternatives. We could simply insist on less of all insecticides, but then we’d lose more food to insects, and farmers might plow up more land to meet demand — that would reduce the habitat and wild plants that are vital for sustaining insects when food crops aren’t blooming. So choosing the best policy really depends on what the primary problem is. Should farmers focus on reducing pesticides (and hope there’s enough habitat elsewhere)? Or should they focus on leaving hedgerows and fallow fields for bees? Or is there some mix that would provide the best of both worlds? To make a good recommendation, we’d really have to understand more about what’s killing the bees. In my next post, I’ll interrogate a lineup of suspects.

The forecast for the next century? Scary with a chance of dying