On Saturday, Andrew Cain and Makenzie Brown woke up around 5:30 a.m. in Cain’s jet boat and prepared to cruise down the Sacramento River. The couple, dressed in camo and boots, needed just enough light to make sure the water wasn’t too shallow for their boat and that they wouldn’t hit any rocks. Cain, an experienced turkey hunter, had scouted a particular location for them. He knew exactly where to go.

If you had asked Brown just a couple months earlier whether she’d ever be a hunter, she would have said no. But then she tagged along while Cain stalked deer. “I had every intention of hanging out and not doing much for the weekend,” she said. “One evening, he shot a huge deer and couldn’t drag it out of the woods by himself, so he came back and got me to help. I guess you could say that sparked my interest.” She took a hunter safety course, received her license, and then set out with Cain to harvest a turkey together. 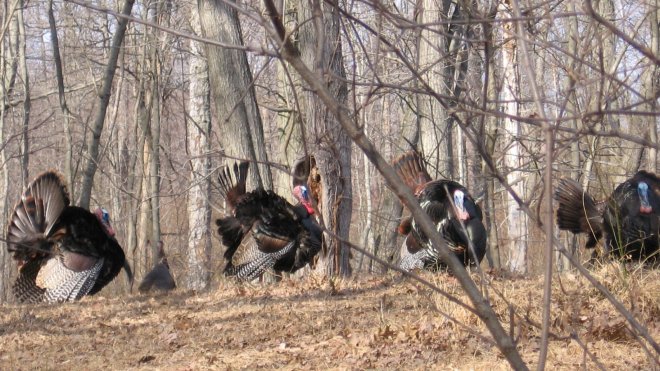 As the sun rose, the pair left the boat and hiked to a spot where Cain had seen hundreds of turkeys on his last hunting trip — and found nothing. No poop, no tracks, no feathers. They walked to another piece of hunting land where they spotted an enormous tom. But the bird took off running through the woods. And so they kept hiking, through the forest and meadows, trying to find a bird for their Thanksgiving meal.

For months, hunters across the country have plotted to kill their own birds for Turkey Day rather than buying an enormous Butterball from the store. And with good reason: Though hunting may seem counterintuitive for animal lovers, it can be a more eco-friendly and humane option for Thanksgiving feasts.

Millions of wild turkeys roamed the U.S. until European colonists arrived and hunted the birds with abandon. By 1930, the population had dwindled to just 30,000. Starting in the late 1800s, however, conservation groups began reintroducing flocks to improve hunting — even in places like California, where turkeys had not existed since the Pleistocene Era. 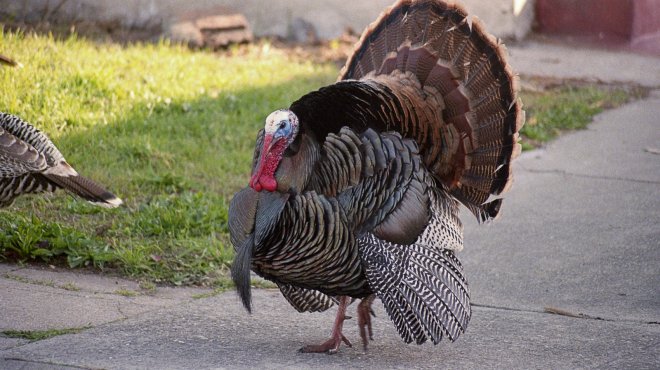 Since then, turkey populations have boomed, largely because we have created an ideal habitat for them. In suburban neighborhoods, turkeys roost on roofs, make cars wait for them while they cross the street, and dine on kibble left for outdoor cats. Their greatest threat may be a yapping, leashed dog. “Humans brought them back from the near dead — a great conservation success story,” as Jim Sterba, author of Nature Wars: The Incredible Story of How Wildlife Comebacks Turned Backyards into Battlegrounds, says. “Now they have an obligation to be good stewards, to manage the landscape for the health of all the plants, animals, and people in it. But they mindlessly ignore this obligation.”

All turkeys, wild or not, are easily domesticated — and they have adapted to our environment, puffing up their wings to chase off threatening humans and hanging around homes where foraging is plentiful. “Lots of wild creatures — turkeys, white-tailed deer, Canada geese, coyotes, raccoons, to name a few — thrive around people for a simple reason: Our habitat is better than theirs,” Sterba says. “We offer up lots of food, landscaping edges for hiding, water, shelter, and protection from major predators — the most major of them since the end of the last Ice Age 11,000 years ago being us!”

Though pesky turkeys can’t be hunted in suburbia, hunters take to public land to harvest birds. Other times, those with problem birds on private vineyards or farms will allow hunters on their property to take a shot at the fowl. 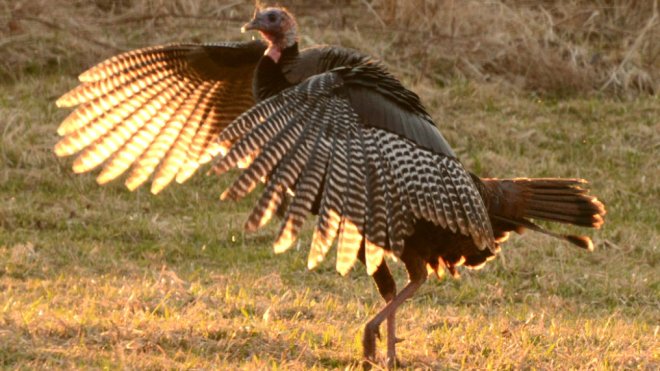 Land Between The Lakes

Often called the last real hunt in America, turkey hunting is notoriously difficult: The birds have great eyesight and travel in flocks. “When deer hunting, you have two eyes to worry about that don’t see color,” says Jen “The Archer” Cordaro, a bow hunter from San Diego. “With turkeys, there are 30 eyes to worry about, which see in color. And if just one eye sees you, the whole flock goes.”

During spring, toms looking to breed are searching for females and, driven by instincts, will readily strut up to a hunter with a decoy hen and a convincing call. During the fall, the task is far more difficult — hunters have to spot and stalk flocks or solitary birds. Still, it can be done.

When it comes to cooking wild turkeys, they might as well be an entirely different species than their domestic counterparts. Consider this: Wild turkeys can live up to 12 years, can weigh 18 pounds, run at speeds as fast as Usain Bolt, and can fly. Farmed turkeys live about a half year, weigh up to 35 pounds, and are really too big to do much of anything. “If you pluck a wild bird and put it next to a store bird, they look nothing alike,” says Cordaro, who was a vegetarian for a decade before becoming a hunter. “A wild turkey is narrow through the chest and the breast meat is probably the size of an industrial-farmed chicken breast.” 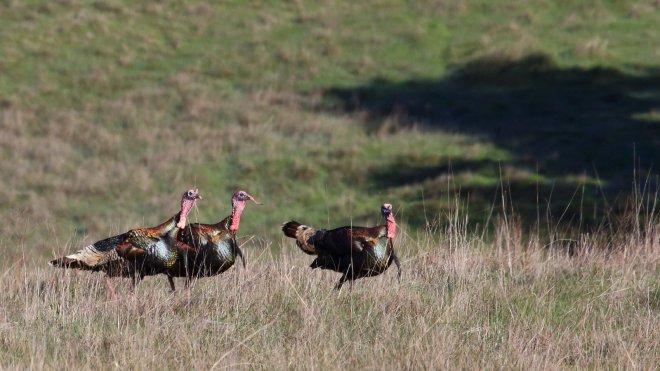 Wild turkey meat is lean and dries out quickly, unlike a plump Butterball. If you must have stuffing, most recipes suggest stuffing the breasts as opposed to the whole bird: The added mass of stuffing requires more oven time, and wild turkey overcooks easily. And, unless you have a jake (a young male bird), it can be challenging to cook a wild turkey whole. “The sinews in the legs will not break down and will be even harder than in a store-bought bird,” says Hank Shaw, a wild animal cooking expert and author of cookbooks on the subject. He prefers to poach breasts in homemade turkey broth, which can be covered with gravy for Thanksgiving. Shaw also suggests barbecuing thighs, making carnitas with the wings and drumsticks, braising meat to be pulled off the bone, and using leftover meat for turkey soup or turkey enchiladas. Cain, the Sacramento River hunter, likes to brine his turkey for a day or two before smoking it with grape or cherry wood. “It won’t be your stereotypical idea of a Thanksgiving turkey,” as Cordaro says. “But you may want to do a wild turkey for the main meat entrée at Thanksgiving if you want to know what a real turkey tastes like.”

There is also less meat per bird — but considering that, according to Dana Gunders at the Natural Resources Defense Council, 204 million pounds of turkey meat is wasted across the country during Thanksgiving, that smaller size may be a good thing. 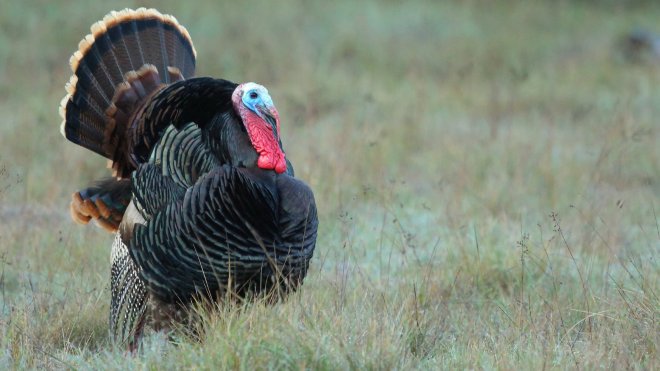 For those committed to eating turkey on Thanksgiving but are squeamish about hunting, don’t have a license or the time to hunt, or don’t know a hunter who can give them some of their meat, Shaw says heritage birds are the next best thing. “They are expensive, but they are very close to a wild bird in flavor, and they have the advantage of being young enough to roast whole,” he says.

As for Cain and Brown, after two days hunting along the Sacramento River, they came up empty handed. On their second day, they became hopeful when they came across a huge flock of birds flapping and strutting in a private walnut grove. The hunters hid in the bushes just beyond the property lines and tried to call the turkeys toward them but, though the birds wandered a little closer to public land, a rancher drove by in a truck and scared the birds further away. Cain and Brown continued hiking, and even saw a couple more birds dashing through the forest, but couldn’t get a shot. They walked about 15 miles in pursuit of the turkeys over the weekend. 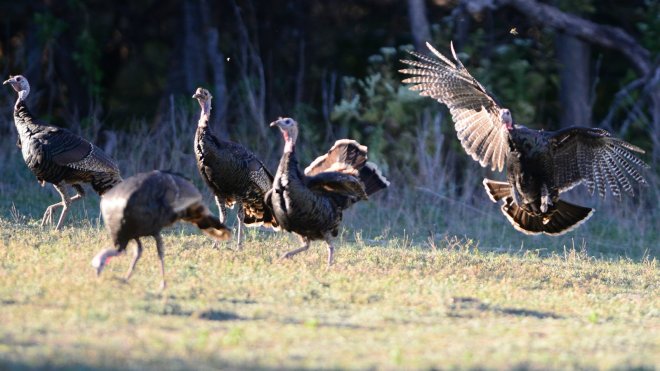 “It’s easy to go to the store and buy a turkey for a dollar per pound and not think about where it comes from,” Cain says. “But this makes you appreciate your food and what it takes to survive. We found a bobcat skull and big piles of turkeys where coyotes had likely eaten them. You see the wild up close and personal.”

For her part, Brown wasn’t dissuaded by her first, unsuccessful hunt. “It would have been really cool to have a turkey for Thanksgiving,” she said. “But, I mean, it’s still turkey season.”

If you’re looking for wild turkey recipes, you can find them at Hank Shaw’s website, Honest Food.