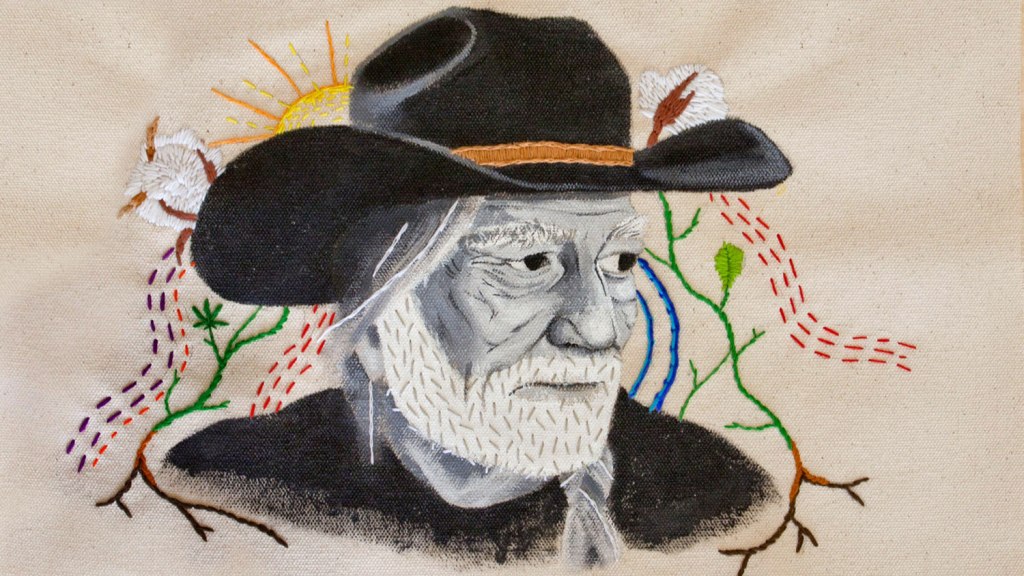 How do you prep for an interview with Willie Nelson?

You read autobiography after autobiography and find yourself watching Grand Ole Opry when you should be reading one more autobiography. You hold a meeting on whether it would be unprofessional to say “yes” to an offered joint or rude to say “no.” (You settle on “no” in order to avoid an interview full of questions like “Aren’t trees weird, Willie?”) You watch old interviews like a football coach reviewing rival teams’ tapes. You haggle with publicists and have a car packed and ready to meet his bus at their go-ahead. You review scribbled notes and polished questions.

It’s hard to think of many celebrities as well-loved as Willie. “In a time when America is more divided than ever, Nelson could be the one thing that everybody agrees on,” wrote Patrick Doyle in a 2014 Rolling Stone profile. When I told my rancher dad about my plans for an interview, he told me to ask Willie to play at his funeral. When I pointed out that dad will likely outlive ol’ Willie, he was silent for a while and then muttered, “Might have to work on that.”

If you haven’t already guessed, this isn’t a story where I track down an American icon and squeeze life’s secrets, folksy wisdom, and a ditty or two from him. I did, however, get my interview. After months of buildup, I got Willie on the other end of the phone line for 20 minutes.

It was difficult to connect the wary, but kind, voice on the phone to the Willie Nelson of my youth. In my small Montana town, Willie was a living Western movie. We’d beg our parents for quarters in dusty bars to play songs like “Mammas Don’t Let Your Babies Grow Up To Be Cowboys.” It was just a little funny and a little sad when some of us babies went off to become doctors and lawyers and such.

America has fewer and larger farms. Here’s why that matters
Think commodity corn farmers are evil? Meet a few of them
Young, single farmer seeks same — and it’s not easy

Even if we didn’t always agree with his politics, it felt like he was singing for and about rural America. As a progressive cowboy, Willie had his boots planted in two worlds, and he won a wide fanbase for it.

Similar to the love and mysticism we heap on Willie, we romanticize the hell out of agriculture, too. This isn’t to say they each haven’t earned their mythical reputations: Willie smoked pot on the roof of the White House and created an incredible body of music. Meanwhile, farmers are connected to nature and life and death in ways most of us can barely fathom from inside a cubicle.

But that romanticism only scratches at the surface of U.S. agriculture. In this series, I want to open a dialogue with the mid-size farmers who have largely been left out of the food conversation. If we continue to ignore them, our polarized ag economy will eventually force them to scale up — or off the land entirely.

I was knee-high when I went to a wheat farm auction in Eastern Montana with my farmer grandparents; I remember thinking it was going to be fun and feeling confused by the heavy mood brought on by neighbors buying up their old neighbors’ machinery.

No American farmer over the age of 40 will forget the low prices, high debt, and droughts that shook rural America in the ’80s. “In the 1930s, everyone in America suffered — urban people, the rich banker, the poor farmer. Everybody lost massively. Everybody was living close to survival. And it meant for kind of a national unity,” former Iowa Rep. Jim Leach (R) told PBS. “With the farm crisis in the ’80s, basically it was only the farmer. And this meant the farmer was alone in an island of difficulty. And that is really something that eats at the soul sometimes deeper than being part of a more general phenomenon.”

But Willie insisted on making the farm crisis a national conversation. In 1985, Nelson recognized the dire state of American agriculture, and launched Farm Aid. What was supposed to be a one-off event turned into an annual concert and a nonprofit that’s pumped millions into farm disaster relief, grants for local food groups, ag policy lobbying, factory farm resistance, and more.

To many of us in the middle of the country, Willie wasn’t just the soundtrack to farm auctions — he was out there trying to make the rest of America care.

I asked Willie how a nation bounces back from something like the sorrow of the 1980s. “That’s a tough question,” he replied. A lot of farmers didn’t want to go back after the ugliness of the ‘80s, Willie said. But “the folks who stayed in there and toughed it out, even though they may have lost their farm, they still kept their character and their good name. They had to overcome it. A lot of them have gone back into the farming business.”

Willie, similarly, has seen his share of rough times, and survived with his name intact. The red-headed stranger landed in the mud not long after his farming friends. In the early ’90s, Willie was hit with a multimillion dollar tax debt. He had mistakenly relied on a manager to pay the bills, and he followed that debt up with some bad business decisions. Then, as his estates were being auctioned off, Willie lost his oldest son.

Every cowboy knows that if a horse bucks you off, you’d better get back on. For all of the media accounts that said Willie was disgraced and done, he kept on singing, churning out albums, and releasing autobiographies. Willie dusted off his jeans and stuck a boot in the stirrup. And the fans filled the stadiums to see him.

But meanwhile, the U.S. continued to lose farms. And while the food movement has had real success with galvanizing eaters and reconnecting Americans to what’s on the local, free-range, organic plate, it remains to be seen whether we can truly care about and understand the people and places behind the food.

When I asked Willie who his favorite food writers are, he responded, “I was raised up with farmers and I have a lot of friends who were and are farmers. I think that’s where you go to get advice about what’s going on out there: You go ask a farmer.”

After three decades of farm advocacy work, how do things look to Willie? “There is a lot of organic farming going on these days and it’s helped out the small family farmer. The farm-to-table markets are doing well,” he said. “People have learned to buy locally and sustainably, and it’s turning into a better situation than it was, but it’s not perfect. There are still a lot of farmers out there in trouble.”

Willie has seen some successes in his other passion: legalizing marijuana. “They’ve already found out that it don’t kill you and it don’t make you go crazy and berserk, running around biting yourself,” he said. And now that the business types have seen the money in it, according to Willie, it’s only going to spread.

I asked Willie if he thinks U.S. agriculture as a whole could have a Willie-like rebound and he laughed at the comparison. “Well, that would be wonderful if they did,” he said. “It’d be another miracle.”

This fall, Farm Aid will celebrate its 30th anniversary. “Helping put out the word is about all we can do,” Willie said, adding that the musicians are just “trying to bring people’s attention to an old problem.”

But Willie has always managed to do more than just bring our attention to the problem of vanishing farms. He has also kept that image, however romantic and outdated, of the cowboy on America’s mind.

Willie and his preferred genre are the distillation of old longing we attach to red dirt roads. “Country music is born when the country becomes a nostalgic ideal,” music anthropologist Aaron Fox explained in a Radiolab segment. The crying steel guitars and vocalizations, Fox said, conjure up memories of migration and feelings of regret.

I listened to a lot of Willie’s music while writing this piece. When his recording of the old classic “Red-Headed Stranger” came on, my boyfriend turned to me and asked, “Where is Blue Rock, Montana?”

So, how do you end an interview with Willie Nelson? I didn’t ask him if he would play at my father’s funeral (glad you’re still kicking, dad!). Instead, I told him a joke. “What’s the difference between beer nuts and deer nuts?” I asked. “Beer nuts are $1.49 and deer nuts are always under a buck.”

Willie gave a good, long, raspy laugh and whatever hurried tension was there dissolved. Who can blame him? It is a pretty good joke, and he’s only human, after all.

If you actually sit down and talk with a commodity farmer, they start to sound a lot like the typical small farmer -- only with a gazilion times more corn. 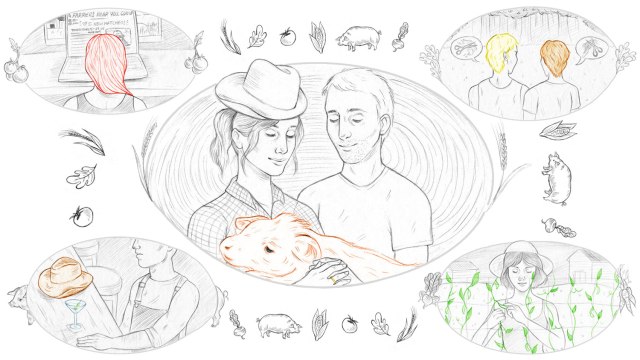 To get a real idea of what a farmer's search for love looks like, we had some very candid conversations with six farmers across the country.
See all articles in this series