Over the years, Phillips 66 and Cenovus Energy, the companies that own the Wood River Refinery in Roxana, Illinois, have been sued by both the state and federal government for polluting the air and discharging toxic wastewater into the Mississippi River. In 2018, they settled one such lawsuit, agreeing to spend about $10 million to upgrade and monitor the refinery’s leaky vents, as well as an additional $500,000 to clean up low-income homes and buildings contaminated by lead in nearby counties where young children and pregnant women may have been exposed. The upgrades were designed to protect residents in Roxana, who had lived in the shadow of the refinery and been exposed to toxic emissions from the plant for years.

But just a year after a district court judge signed off on the agreement, the company recently notified the Environmental Protection Agency (EPA) and other agencies involved in the settlement that it had suspended all work on the lead abatement program. In fact, it may not be able to comply with many of the terms in the agreement, it wrote to the agencies. The reason? The COVID-19 pandemic.

“The idea of delaying lead abatement is concerning because people are spending more time at home, so they’re getting more exposure [to lead],” said Debbie Chizewer, managing attorney at the environmental nonprofit Earthjustice’s Midwest office in Chicago.

Over the past two decades, the EPA has entered into hundreds of consent decrees with local municipalities and polluting businesses across the country. These court-approved settlement agreements require them to do things like conduct routine inspections, install equipment to capture air pollutants, and clean spills and leaks. Often the settlements include million-dollar penalties and “supplemental projects” to clean up and prevent contamination.

But consent decrees also typically include so-called “force majeure” clauses, which allow parties to avoid penalties for being unable to fulfill their obligations due to unforeseeable circumstances. This could be a natural disaster — or, say, a global pandemic.

With government-ordered shutdowns the norm as the novel coronavirus ravages the country, many of those cities and businesses are now looking to “force majeure” provisions in their consent decrees and asking the EPA and Department of Justice (DOJ) for leniency when evaluating whether they’ve violated their terms. Grist obtained two such requests to the EPA, one from Phillips 66 and another from the city of Dallas, through open records requests.

While experts agree that the COVID-19 pandemic unquestionably qualifies as a force majeure event, they’re worried that unscrupulous polluters may use it as an excuse to avoid complying with the agreements, even when they’re able to.

Those polluters may feel that they have an ally in the EPA. The agency’s enforcement discretion policy, released on March 26, was widely criticized by environmental and public health advocates for broad language that appeared to imply that businesses did not have to comply with a number of reporting and compliance requirements during the pandemic. The policy specifically addresses consent decrees, stating that “EPA staff will coordinate with DOJ to exercise enforcement discretion with regard to stipulated penalties for … routine compliance obligations.” Those obligations, the agency said, included monitoring, testing, and sampling for any number of air and water pollutants, as well as laboratory analysis, training, and certification obligations.

“We had a concern about this [provision],” said David Baron, managing attorney at the environmental nonprofit Earthjustice. “It implies that EPA doesn’t view these requirements as critical, and that’s just not the case. To say that that’s just a routine requirement, that it does not deserve vigilance on EPA’s part, is just not responsible.”

Phillips 66 first sent the EPA, DOJ, and Illinois attorney general a letter in March, outlining a slew of violations that it might commit in the coming months due to the pandemic. The company may not be able test its stacks for pollutants or conduct analyses at its labs if its staff and contractors are affected by quarantining measures, it said. The refinery may emit larger volumes of pollutants if it’s forced to shut down and restart due to supply interruptions or staffing shortages. It may not be able to measure benzene, a carcinogenic compound, at the refinery’s fenceline if a contractor is unavailable, it warned.

“This list is not intended to be all inclusive,” an attorney for the company wrote.

The Justice Department didn’t buy the company’s argument. On April 2, a DOJ attorney wrote that the company’s request wasn’t specific enough as it “does not identify any particular Decree requirements for which compliance would be delayed.” The department said it would defer judgement on the force majeure claim until receiving more information from the company.

Two weeks later, Phillips 66 sent a more specific and detailed letter about the lead abatement program it had set up as part of the consent decree. Per the agreement, the company is required to spend $500,000 on lead cleanup work by April 2021. So far, it has removed lead threats at four of nine homes it has identified. But last month, the company said that it had instructed its contractor to suspend all work on the lead abatement project as long as Illinois’ stay-at-home order is in effect. Still, the company maintained that it expects to complete all lead cleanup work by the 2021 deadline. Dennis Nuss, a Phillips 66 spokesperson, said that the company “recognizes the importance of lead abatement activities” and that it plans to resume work once state inspectors who verify cleanups are available.

Even if the EPA and Justice Department decide that the company is in violation of the agreement, it may not face any penalties. Five days after the EPA announced its enforcement discretion policy, the DOJ said it would suspend the collection of penalties owed for violations of consent decrees and other enforcement orders. As Bloomberg first reported, the Justice Department has since used that policy to let the oil and gas behemoth BP off the hook for violating a consent decree requiring it to reduce air pollution at an Indiana refinery.

Baron is worried about the DOJ’s new policy because settlement agreements in civil litigation are “only as good as the government’s willingness to watchdog the consent decree and make sure that the parties comply.” Still, he said consent decrees are an important “additional safeguard” because courts and the Justice Department provide oversight — unlike in cases where polluters might go directly to the EPA to request pandemic-related discretion regarding their compliance with environmental laws.

Polluting industrial operators aren’t the only ones invoking force majeure. Many major metropolitan cities have also entered into consent decrees with the EPA over the years for polluting rivers and streams with raw sewage and contaminated stormwater. Dallas is one of them. In 2006, the city entered into a $3.5 million settlement with the EPA and DOJ after investigations found that the city wasn’t doing enough to limit pollutants that were entering its stormwater systems. Those pollutants ended up in the Trinity River, a source of drinking water for Houston residents. 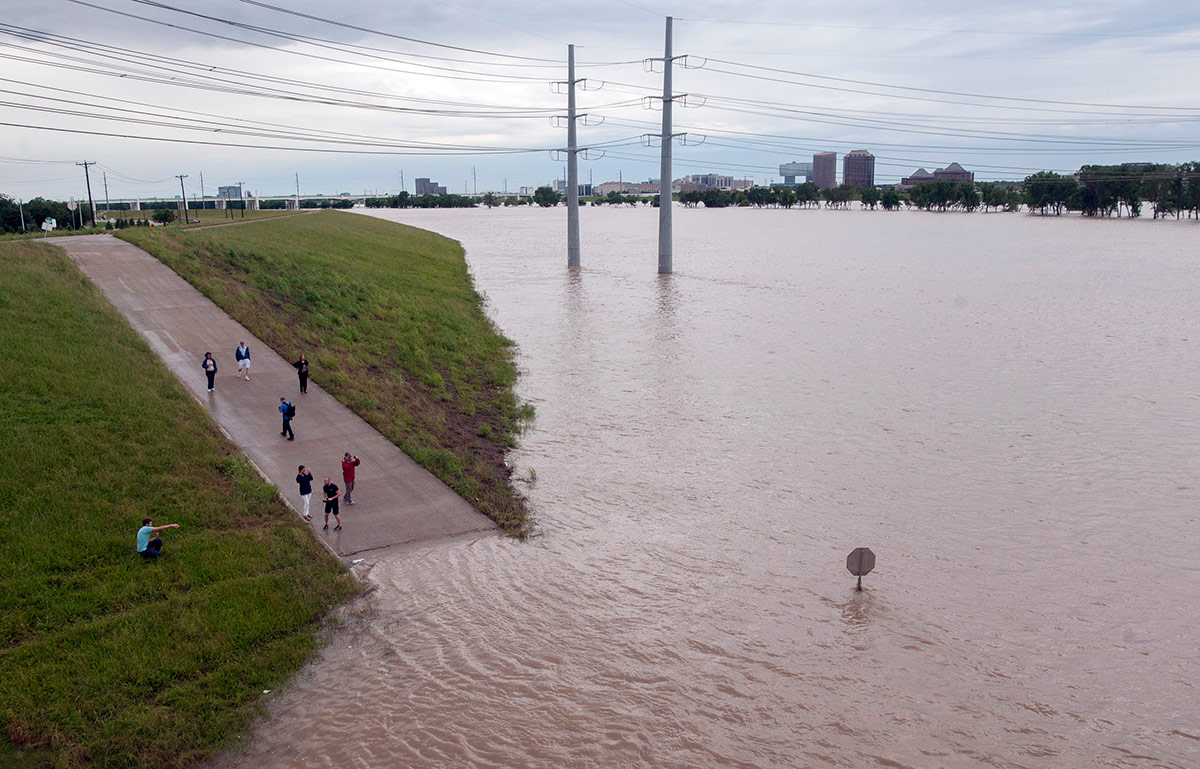 Importantly, the agreement required the city to increase the number of people working in its stormwater management program by 25 percent. It had to inspect 500 industrial facilities each year and construction sites every two years. The requirements were intended to help the city catch businesses that were dumping waste into storm drains and ensure that developers were following environmental rules.

In March, almost 15 years after the city agreed to set up the inspection program, it notified the EPA and other agencies that it may not be able to conduct inspections due to the pandemic.

“We anticipate that staff shortages could occur due to illness, quarantines, and any public health directives that impact staff attendance and could impact the City’s ability to perform the required number of inspections,” the city attorney wrote.

A spokesperson for the EPA said the agency is still reviewing the city’s request. Anastasia Reed, a spokesperson for the city, said that field staff and inspectors are processing inspection reports remotely wherever possible and avoiding in-person meetings. The city has also provided gloves, masks, disinfecting wipes, and other materials to keep staff safe.

“We have been fortunate that these steps appear to have been effective thus far in allowing us to continue our duties, including successfully meeting our Consent Decree obligations,” she said.

In the last few weeks, many law firms that advise utilities and the oil and gas industry have published blog posts recommending that businesses notify the EPA in advance if they expect to be unable to fulfill the obligations in their consent decrees due to the pandemic.

“To obtain favorable results on a claimed force majeure event early in the process, [businesses] should act diligently and take proactive compliance measures where possible to ensure that EPA does not deem them to be a contributing factor to non-compliance attributed to a force majeure,” Baker Botts, an international law firm, advised.

Ultimately, whether or not the EPA and DOJ accept a force majeure claim should be made on a case-by-case basis, environmental law attorneys said.

“I would be looking for the rationale being offered that’s something that is clearly and indisputably linked to COVID, and it’s not a preexisting situation that’s being resolved,” said Tracy Hester, a professor of environmental law at the University of Houston. “That’s going to require some pretty sophisticated judgement by the agencies, to make sure that they’re not packaging too much into some of these decisions.”

While We Were Sheltering