On Nov. 8, Nana Firman woke up to the third day of U.N. climate talks in Marrakech to find that the unthinkable had occurred: A man who threatened her as an environmentalist, immigrant, Muslim, and woman had been elected president of the United States.

Firman, the Muslim outreach director of the interfaith nonprofit GreenFaith, remembers the shock that numbed breakfast that day in Morocco. Nobody talked as people tried to grapple with this new reality, their phones buzzing furiously with messages from America. “It felt like a dream, or a nightmare,” Firman says. “A lot of people kept asking, ‘What’s going to happen to you?’”

Trump’s election has dealt a heavy blow to Muslim environmentalists who must now focus first on their own safety and citizenship. Human rights and sustainability have always been intertwined. In Trump’s America, advocates say that’s going to be even more apparent.

Muslim environmentalists have already taken big steps to incorporate sustainability within their faith. The Islamic Society of North America divested from fossil fuels after a campaign led by GreenFaith fellow Imam Saffet Abid Catovic. The “Greening Our Ramadan” campaign calls for food conservation, biodegradable dishware, energy-saving bulbs, and a sermon on the Islamic principles of conservation during the holy month. And then there’s the Green Scripture Project, a curated collection of verses on faith and the environment in the Islamic tradition.

According to Asher, the head of one Muslim environmental group, Islamic communities have historically taken less of an interest in environmental issues due to more immediate priorities, including their own survival and protection. Climate impacts have already led to political dislocation and resource scarcity in Muslim communities across the globe. Many scientists point to water shortages and displacement brought upon by a multi-year drought as one of the driving causes of the Syrian civil war.

Trump, of course, has called climate change a Chinese hoax, threatened to “cancel” the Paris climate agreement, and done nothing to show that he understands the potential connection between global warming and global insecurity, despite the concerns of the U.S. Defense Department and national security experts.

For Muslims, that disregard for climate change’s impacts across the globe represents just a fraction of the overall hostility they faced throughout the Trump campaign. In the weeks since his election, Trump seems to be sticking fast to the anti-immigration, Islamophobic vows that greased his path to victory.

The president-elect’s policy advisors are currently considering a reinstatement of a “Muslim registry.” From 2002 to 2011, the government kept a database of immigrants and visitors from mostly majority-Muslim countries, which lead to racial profiling and deportations of thousands for civil immigration violations. Kris Kobach, who helped design the original database, has been in talks with the Trump team and is a notorious immigration hard-liner with connections to the hate group Federation for American Immigration Reform.

Though Muslim activists are unsure of how the database would affect their jobs, their guesses are understandably bleak. GreenFaith’s Firman predicts flying for her work will become even more of a nightmare, with extra screenings and increased security. Founded in 1992 in New Jersey, GreenFaith has now expanded to an international platform and leads marches and pilgrimages across the world. So not flying isn’t an option.

As Asher joked, “If we’re all put in an internment camp, we might be affected in our ability to be advocates.”

Trump’s America has already become an increasingly unsafe place to be Muslim. At the University of Michigan, a white man threatened to set a female Muslim student on fire if she didn’t remove her hijab. At a high school in Georgia, a Muslim teacher received an anonymous note telling her to “hang herself” with her headscarf. Even before the election, hate crimes against Muslims were already on the rise; the FBI reported a 67 percent increase from 2014 to 2015, the highest level since the 2001 terrorist attacks.

“Islamophobia has always been here, but people hide it,” Firman says. “But now it’s going to come up to the surface.” 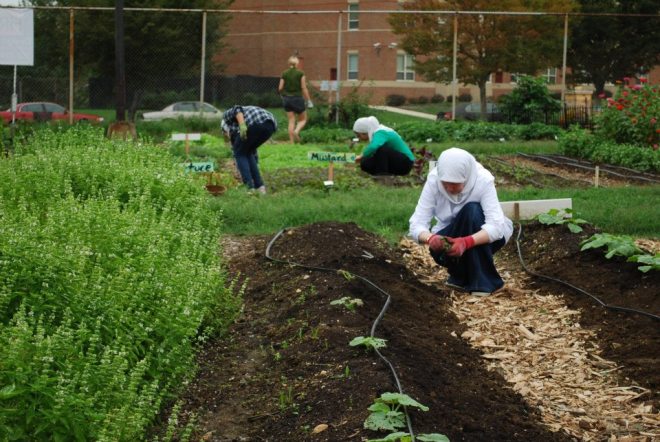 GreenFaith director Fletcher Harper says that during the presidential campaign, many of his Muslim colleagues spent an increased amount of time counseling their children, devoting time to their mosque, or responding to bullying.

Firman wears a hijab, a decision she knows makes her an obvious target. “Sometimes I feel like I am going to be OK, that it’s not going to happen to me, but right now I have to be more cautious,” she says. “But this is my calling, so I just have to take more precautions.”

The greatest concern for Muslims remains at home or in mosques, which commonly share space with Islamic schools. Every few months in the years leading up to the election, Firman’s mosque in San Diego would receive a letter with Muslim slurs that threatened violence. Each time, her imam would close down the school for the students’ safety, a precaution that Firman worries may soon impair the children’s education if the letters increase in frequency.

Many Muslim organizations have already released post-election survival kits for their members. The homepage of the Islamic Society of North America offers a link to a youth helpline for cases of Islamophobia and mental health, resources on bullying, and a guide meant to help parents talk to their children about the election results. Firman says GreenFaith hopes to hold harassment and de-escalation training for its Muslim members.

For allies, the work is just as necessary, according to Harper. “It’s not flamboyant or sexy, but being a good neighbor and showing up as needed is what we’ve found to be most helpful,” he says.

When it comes to policy, Muslim leaders hold out hope that the president-elect will drop the more inflammatory rhetoric he relied on in his candidacy. “We hope to find ways to work with the new administration, but it will have to be based on the basic human rights that this country was founded on,” says Catovic, the GreenFaith fellow. “If there’s an attempt to erase some of those principles, that’s when the basic structure of America comes under attack, and all Americans have a duty to protect that national structure.”

Even in the past few weeks, Muslim activists have seen an outpouring of support from fellow faith communities and other populations targeted by Trump’s campaign. Although Muslim-Latino coalitions have been historically rare, they may represent one of the strongest unified fronts against Trump’s xenophobia.

Firman has already received emails from Latino interfaith groups and plans to meet soon to strategize for the next few years. Catovic has also witnessed a tremendous expansion of Muslim-Latino coalitions in the past year and says he expects them to cooperate more on action.

Firman remains optimistic. “The blessing in disguise is that everyone is starting to talk,” she says.“There’s a verse in the Quran that says with every difficulty, there is ease. This is part of that, this ease is people coming together.”

An injured Standing Rock activist could lose an arm, but her resolve remains strong