Since graduating from Williams College this spring, 21-year-old Sophia Wilansky has devoted herself full-time to fighting for environmental justice, her friends say. In a standoff Sunday night with police in Standing Rock, N.D., she might have lost an arm for it.

Emergency workers airlifted Wilansky to Hennepin County Medical Center in Minneapolis after she was injured during an encounter between law enforcement and anti-pipeline activists, friends and family say. News reports and social media accounts show that police confronted the activists, who call themselves “water protectors,” with an array of militarized tactics, including projectiles and a low-pressure water cannon in freezing temperatures.

The Standing Rock Medic & Healer Council said it treated 300 people after the standoff, sending 26 to the hospital. A statement issued Tuesday by the council quotes Sophia’s father, New York attorney Wayne Wilansky, describing the injuries to his daughter’s arm, which he said surgeons hope to save from amputation with a potential 20 surgeries:

A grenade exploded right as it hit Sophia in the left forearm taking most of the undersurface of her left arm with it. Both her radial and ulnar artery were completely destroyed. Her radius was shattered and a large piece of it is missing. Her medial nerve is missing a large section as well. All of the muscle and soft tissue between her elbow and wrist were blown away.

The Morton County Sheriff’s Department told the Los Angeles Times that police “didn’t deploy anything that should have caused that type of damage” and maintained that “we’re not sure how her injury was sustained.” A sheriff’s spokeswoman told the Times that medical officials first encountered Wilansky away from the scene, at a nearby casino, and suggested she might have been injured when protectors were rigging their own explosives.

Activists counter that the demonstration was peaceful, and no one at the protectors’ camp has created explosives or even has the materials to do so.

Wilansky’s father put the blame squarely on law enforcement. “The police did not do this by accident,” he said. “It was an intentional act of throwing it directly at her.” He said surgeons removed grenade shrapnel from her arm, which will be held for evidence.

Standing outside the hospital Tuesday afternoon as sloppy snow fell, Wayne Wilansky said Sophia had planned to join the thousands of people from the Standing Rock Sioux and hundreds of other tribal nations who plan to camp out through the winter in attempts to block completion of the Dakota Access Pipeline. Three weeks ago, he said, she set off for North Dakota with a subzero sleeping bag.

It wasn’t the first time Wilansky has put her body on the line for a cause. Her friend Alex Lundberg, who protested a pipeline with her in Vermont, told Grist that she has also stood up to a Spectra Energy pipeline in New York and the West Roxbury Pipeline in Massachusetts.

“That’s three pipelines in one region she’s thrown down hard for,” Lundberg said, “in communities she’s not that familiar with, just wanting to show up and be supportive and be there with the people resisting.”

She got involved with Standing Rock the same way, he said. “She felt the calling to go out there and stand with the people against a continued cultural genocide and to help protect the water.”

A friend in New York, Becca Berlin, told Grist that Wilansky had been looking for a ride to North Dakota for weeks. In the meantime, she participated in direct action around New York City and the East Coast, attending protests organized by groups like NYC Shut It Down — activists fighting against racial injustice and militarized policing.

“It’s really not a hobby,” Berlin said. “It’s something that she’s been doing constantly.”

Wilansky was actually due to appear in court today in West Roxbury, Mass., said climate activist Tim DeChristopher, who was arrested alongside her this summer at a pipeline protest. Instead, she was shuttling in and out of surgery.

Wilansky’s injury occurred in just the latest of many escalating standoffs over the pipeline, which the Standing Rock Sioux say endangers their sacred sites and water. The pipeline also poses questions of tribal sovereignty. In an appeal to the United Nations this September, the nation said the pipeline violates human rights and breaches treaties.

This summer, hundreds of water protectors converged in North Dakota to voice anger and anxiety about the pipeline route. Over the past few months, photos and live videos on social media have shown aggressive tactics used by police against the protectors.

According to her father, Sophia’s body also shows welts from rubber bullet shots that she had received previously. 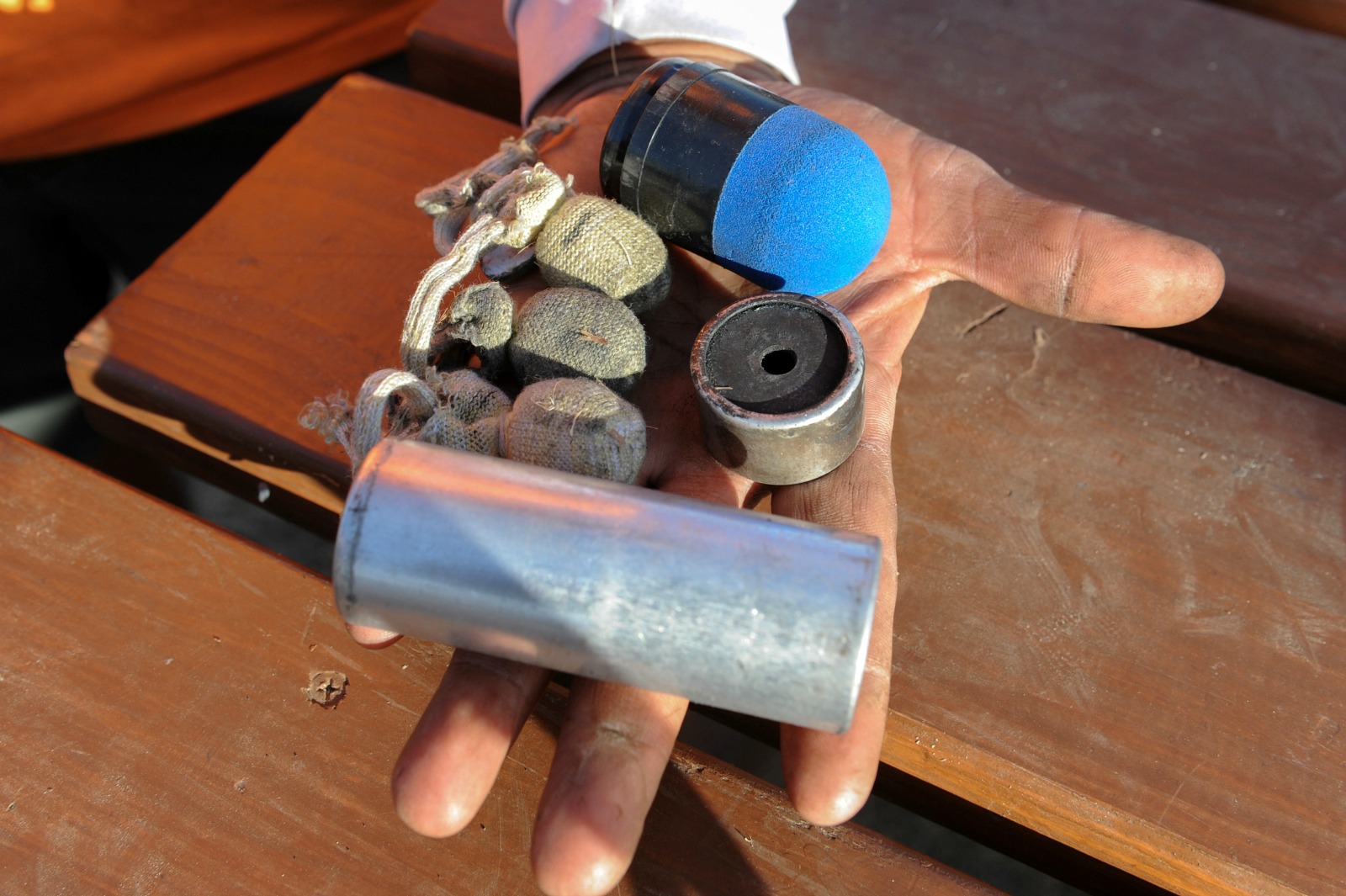 A collection of weapons used by police against protesters at Standing Rock. REUTERS/Stephanie Keith

“It’s unbelievable that governments are violently attacking citizens who are there peacefully,” Wayne Wilansky said. “We need everyone in this country to step up and say we’re not going to do this anymore, we’re not going to kill innocent people.”

Wayne said that his daughter’s arrival at the hospital was delayed for several hours because police have blocked roads, making it difficult for travel — including by emergency vehicles — between the Standing Rock Sioux Reservation and Bismarck, where Sophia was taken before being airlifted to Minnesota. On Sunday, activists said, they were trying to clear two vehicles blocking a bridge on the main road.

But Wayne Wilansky says he holds police and elected officials responsible for his daughter’s injury. “I hold the governor of North Dakota, the police, the National Guard,” he said. “Even President Obama, who I love, said two or three weeks ago, ‘Well, we’re going to wait and see.’ There’s nothing to wait and see. These people need help. They need to diffuse the situation before people die. And people will die if the situation isn’t stopped.”