This story was originally published on September 28, 2020, by THE CITY. Sign up here to get the latest stories from THE CITY delivered to you each morning.

Over the previous few months, as fewer cars took to the roadways near the family’s west Bronx home during the city’s COVID-19 lockdown, he rarely needed the pump, she said.

And while Bouret cannot prove it, she suspects the return of constant motor vehicle emissions from local thoroughfares — including the Cross Bronx and Major Deegan Expressways — may be triggering her son’s symptoms.

“Once the pandemic started and there were less cars in the street, my son had not had an asthma attack,” Bouret, a mother of two, told THE CITY. “Ironically, now that the outside has opened again, my son has had to use his pump a little bit more.”

His symptoms have been severe enough to warrant hospitalization four times in his young life, said Bouret — he even spent his second birthday in the hospital.

Concern over her son’s health compounds an already taxing time for Bouret and her family. Like many in Morris Heights, where she lived until recently, Bouret tested positive for the virus, as did her two sons, she said. Only she and her older son, Jonathan, who is 7, showed symptoms.

Her grandmother-in-law, Joan Terrero, a mother of 10, died from the virus in early May on her 86th birthday.

Mounting preliminary research, including from a team at Harvard, suggests exposure to air pollution is associated with higher COVID-19 death rates.

Nationally, this link is most apparent in The Bronx, according to a new peer-reviewed study from researchers at SUNY’s College of Environmental Science and Forestry and ProPublica, published in the journal Environmental Research Letters.

Using U.S. Environmental Protection Agency data and local mortality figures, scientists found the Bronx ranked the worst for COVID-19 death rates and respiratory hazards of the more than 3,100 other counties in the country. Brooklyn, Manhattan, and Queens placed second, third, and sixth, respectively.

Like Terrero, many Bronx residents included in THE CITY’s “MISSING THEM” memorial lived in neighborhoods where they were consistently exposed to a major source of air pollution: the busy expressways nearby. For about 20 years, Terrero, who raised Bouret’s husband, lived in an apartment two blocks from the Cross Bronx Expressway.

Microscopic particles emitted from road traffic can penetrate lung tissue and cause respiratory and cardiovascular problems. The city health department estimates that current levels of PM2.5, or fine particulate matter, contribute to more than 2,000 deaths and more than 6,000 emergency room visits and hospitalizations each year.

“Higher particulate matter is related — in the United States — to higher death rates from COVID-19,” said Michael Petroni, a doctoral candidate and the lead author on the SUNY ESF/ProPublica study. “Highways are a source of particulate matter, but we also know that they’re a source of all sorts of other air pollutants that affect people’s respiratory system.”

Bronx neighborhoods like Morris Heights, which sits at the often-congested meeting point of the Cross Bronx and the Major Deegan Expressways, have shouldered an outsized burden of the city’s coronavirus-related death toll. As of late September, more than 4,000 had died from the virus in the borough, according to city health department data. 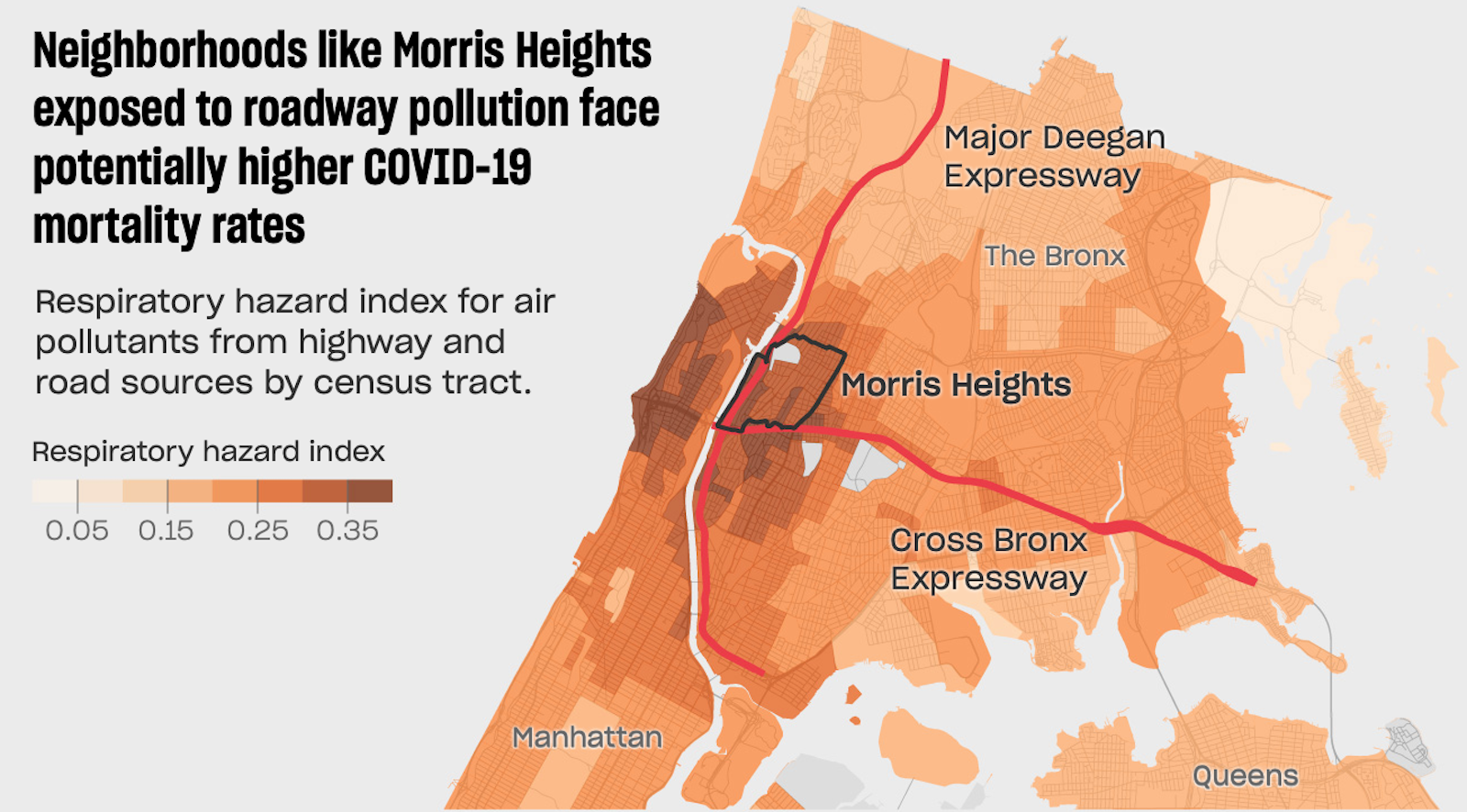 Bronx residents, at the peak of the pandemic, were twice as likely to die from the virus as their counterparts in the city’s other boroughs.

When THE CITY tracked down the home addresses of the nearly 1,800 people in the MISSING THEM database, using voter-registration data and other public records, it revealed clusters of deaths among people who lived near the Cross Bronx.

“We lost quite a number of folks,” said Bola Omotosho, a doctor at Montefiore Medical Center who is also chair of Bronx Community Board 5. “There were many people that were sick in my district.”

He said he was one of them.

Like their neighbors elsewhere in the borough, Morris Heights residents experience chronic health conditions, like asthma and diabetes, that can exacerbate COVID-19 disease at levels far higher than much of the city and the country.

Many area residents were already struggling financially, even before pandemic-related job losses. The Bronx now has an unemployment rate in excess of 21 percent, the latest state Department of Labor statistics show.

And 58 percent of households living in Bronx Community District 5 spend more than 35 percent of their incomes on rent, the second-highest of any of the city’s 59 districts.

“We all know someone with asthma”

For decades, community members and environmental groups have complained about noise and traffic-related pollution from the Cross Bronx. The highway had been unpopular since infamous New York “master builder” Robert Moses proposed steamrolling swaths of neighborhoods to build the Cross Bronx in the 1940s.

Some five decades after its completion, some nearby residents say it is hard to imagine the noisy highway not being part of the neighborhood.

“It’s sad to say, but it becomes so much a part of your lived experience that you don’t pay it any mind,” said Dior St. Hilaire, who lives near the expressway in Tremont and runs GreenFeen, which trains community members on sustainable living and composting. “We all know someone with asthma, so that says a lot about the air quality.”

“It’s not until you leave that city that you realize that your air is sh—ty,” she added. 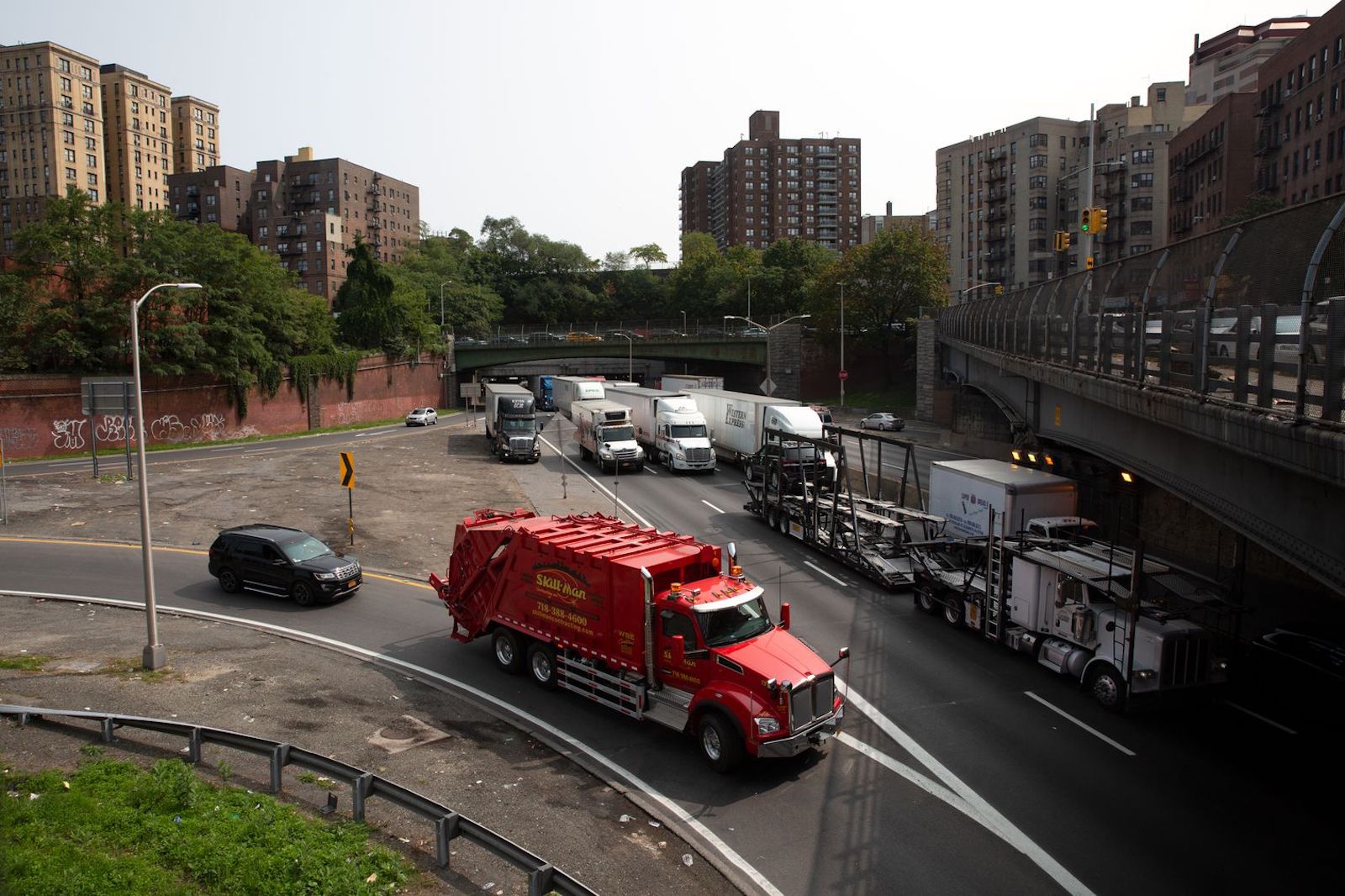 Levels of lung-aggravating PM2.5 have fallen in The Bronx and citywide in the last decade, the health department’s Community Air Survey has found. But higher levels of PM2.5 persist in places with high traffic emissions — including along the Cross Bronx.

“If you’re living next to a highway, you are exposed to higher levels of air pollution,” said Markus Hilpert, associate professor in the environmental health sciences department at Columbia University’s Mailman School of Public Health and one of the authors of a recent study on truck traffic and pollution in the South Bronx.

He also noted that living near a highway is usually, though not always, associated with lower economic status.

“Where the housing is cheapest is often where the exposures are greatest,” said Diana Hernández, an associate professor of sociomedical sciences at Mailman who studies the impact poverty and place have on health.

“Lower-income people can’t necessarily escape multiple forms of disadvantage,” added Hernández, one of the co-authors of the traffic study.

Residents of these communities often contend with other polluting infrastructure, said Tok Oyewole, an organizer at the New York City Environmental Justice Alliance.

This can include “clustering of waste transfer stations, peaker power plants, food distribution, and associated heavy-duty truck traffic from industry, on top of proximity to highways,” she said.

Though the expressway was first proposed by the Regional Plan Association in 1929, it would not be started until the late 1940s, under Moses, then head of the City Planning Commission.

The Moses plan required builders to demolish parts of Tremont, displacing thousands. A coalition of residents — led mostly by local housewives and increasing numbers of Black and Puerto Rican families then moving to the area — fought the plan for years.

The group even proposed an alternate route through Crotona Park that they believed would avoid mass displacement, historians say — to no avail.

“There was the mayor’s New York City and then there was Robert Moses,’” Lloyd Ultan, Bronx borough historian, told THE CITY.

Ultimately, Tremont residents lost their bid, when officials “overrode vociferous and sustained efforts” from community members and approved the proposal to build the middle of three sections of the expressway as originally planned — right through the heart of The Bronx, The New York Times reported in December 1954.

“Their chief argument has been that they would be unable to obtain new homes and that the city would not assist them in getting replacement houses equal to the old ones,” the report said.

And while there were attempts to relocate families, Ultan said, some estimate 5,000 residents were displaced during the nearly 15 years it took to complete the Cross Bronx. Many did not return, and countless others left, their lives disrupted by relentless noise, dust, and fumes, journalist Robert Caro noted in The Power Broker, his book about Moses.

“One can sit next to the expressway for five days, observing it, and notice that by the fifth day the nausea and headache and dizziness one felt at first are gone,” Caro wrote in the 1974 book. “But no one knows what the inhalation of carbon monoxide — and assorted hydrocarbons emitted by automobile motors — in diluted form produces, for no study has been done on the effect of prolonged exposure to such gases.”

Today, far more is known about exposure to emissions, and researchers are beginning to link exposure to pollutants to increased death rates during the COVID-19 pandemic.

For families near the Cross Bronx, these preliminary findings validate what they have suspected for years: that the highway is contributing to poor health outcomes in the community.

“I think it impacted us the most because of the air quality,” Bouret said of the coronavirus. “We were more susceptible to it.”

Her grandmother-in-law’s death has heightened Bouret’s commitment to understanding the impact of the environment on health, she said.

“Whenever anything comes up about COVID, I want to do the interviews, I want to speak out, I want to provide as much information as I can,” Bouret said. “‘Cause I know she would want me to.”

THE CITY is an independent, nonprofit news organization dedicated to hard-hitting reporting that serves the people of New York.

Is the lonely astronaut in Bad Bunny’s latest music video thinking about lost love or a lost climate?