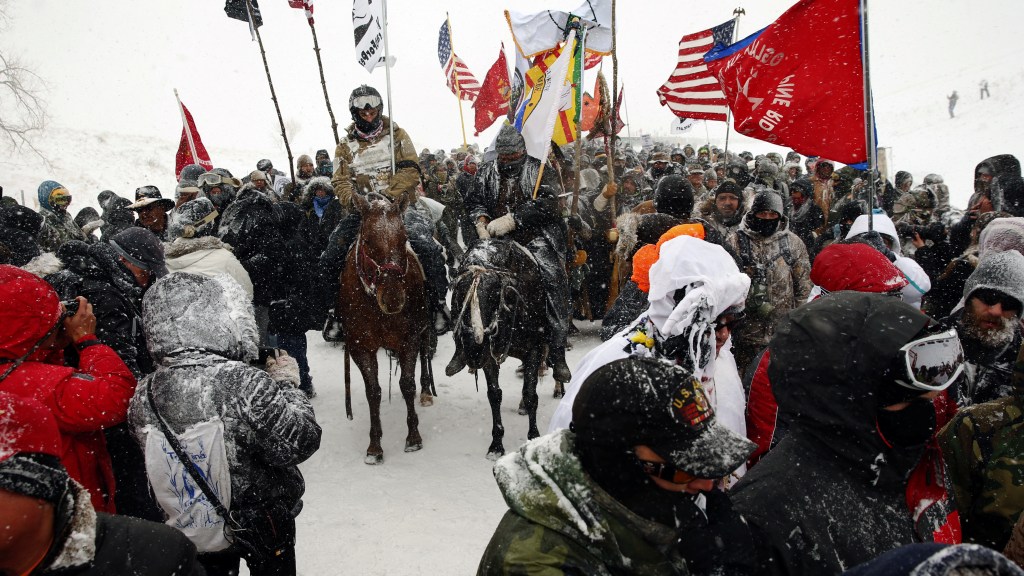 In the wake of the Obama administration’s surprise decision to block a portion of the Dakota Access Pipeline, company reps seem confident they need only wait for President-elect Trump to keep building. But the lawyer who represents the Standing Rock Sioux says it won’t be so easy to overcome the legal hurdles.

“If an agency decides that a full environmental review is necessary, it can’t just change its mind with a stroke of a pen a few weeks later,” EarthJustice attorney Jan Hasselman told Grist. “That would be violation of the law, and it’s the kind of thing that a court would be called upon to review. It doesn’t mean they’re not going to try.”

Trump could force the pipeline through along the disputed route at Lake Oahe. He technically could ignore the Corps’ decision to conduct a public Environmental Impact Statement with his newfound executive powers, but that might not be wise.

“He could in the sense that you can rob a bank, but you’d get in trouble,” Hasselman said.

If that were the case, Standing Rock would be prepared to take the matter to courts again, their lawyer told Grist.

“Circumventing the environmental assessment now that the agency has determined it’s the right course of action shouldn’t pass muster under legal standards,” he added.

For example, the U.S. 9th Circuit Court of Appeals has ruled that federal agencies can’t just flip on a dime on settled rulemaking that is based on facts because a new administration has taken over. The Supreme Court this year declined to take up the case, leaving the circuit court’s decision standing that the Bush administration couldn’t exempt the Tongass rainforest in Alaska from a conservation rule, when the agency’s fact-finding found otherwise.

Unless a conservative Supreme Court reverses course, then Standing Rock still has that advantage in a Trump era.

Going further to weaken environmental regulations overall would require a more robust change to the law with congressional action. With the law on their side for now, environmental justice advocates could challenge administration decisions just as they did in the Bush administration. (Talk about government interference: Trump is reportedly also considering privatizing oil-rich Native American land to boost oil companies.)

Energy Transfer Partners has its share of options, too — even if Trump didn’t reverse the decision, it could still sue to maintain the current route.

One of the surer bets on what’s next is that the company is going to have to wait longer to build its pipeline than it originally intended. Energy Transfer Partners wanted it to be operational by the end of the year. If the Corps decision holds, it could potentially be tied up as long as a year or two. It would have to undergo a full environmental assessment of route alternatives, which is the traditional way government agencies solicit input from the public and weigh the pros and cons of environmentally risky projects.

The pipeline is far from dead. But it’s also far from a sure thing.