Trumpcare and climate change will have the same victims 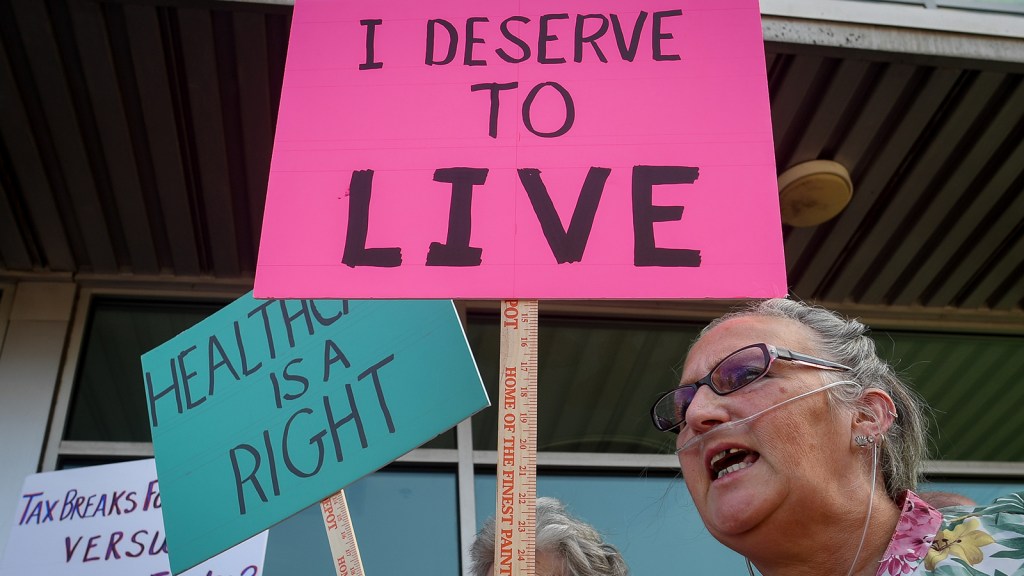 Trumpcare and climate change will have the same victims

In May, when Melissa Mays heard that the U.S. House of Representatives passed a bill to repeal and replace Barack Obama’s signature Affordable Care Act, the Flint, Michigan, resident raced to Washington, D.C.

Her three sons rely on specialists — neurologists, gastroenterologists, infectious disease doctors, physical therapists, and rheumatologists — to deal with numerous ailments that resulted from drinking Flint’s contaminated water. A Medicaid expansion program helps cover their care, and both the House legislation and its hotly debated Senate counterpart would eliminate those funds.

“They’re not seeing what they’re doing — how it’s going to affect actual human lives,” says Mays. “Flint’s not an outlier. We’re one of many, many poisoned communities.”

The bills, she says, threaten to “take what little help we have to try to regain our health.”

The Senate’s Better Care Reconciliation Act of 2017 would reduce the deficit by $321 billion in the next 10 years, according to the Congressional Budget Office, in part by cutting Medicaid. It would also cause a full 22 million people to lose insurance. After several Republicans refused to endorse the legislation, Senate Majority Leader Mitch McConnell announced he would delay voting on the bill until after the July 4th recess.

If passed, Americans with chronic health issues will likely be at risk. According to environmental health advocates and experts, the most pronounced impact would fall on the same shoulders that climate change disproportionately affects: communities of color and low-income people. Because of higher premiums, “few low-income people would purchase any plan,” the CBO estimates. And fifteen million people would lose Medicaid coverage under the current Senate proposal.

John Balmes, a professor of environmental medicine at the University of California, San Francisco, says that while Obamacare isn’t perfect, the Senate’s plan isn’t a worthy alternative. Cutting Medicaid in particular, he says, is “silly.”

“I don’t know of a single healthcare organization — whether it be physicians, nurses, or hospitals — that supports what Congress is trying to do,” Balmes explains. “That should tell the legislators something.”

In March, organizations including the Sierra Club, Green Latinos, and the League of Conservation Voters sent a letter to congressional leaders urging them to protect preventative and emergency care for people who live in low-income and front-line areas.

“These communities and the women who live within them face a greater risk of getting sick, losing their livelihoods, living in poverty, and being displaced when weather disasters strike,” the letter read. “These communities are also the least likely to have affordable access to healthcare they need to discover early warning signs of illnesses like those caused or exacerbated by environmental factors.”

In June, with the Senate bill on the horizon, more groups signed onto a similar letter.

Advocates are working hard to connect the dots between climate change and healthcare policy for lawmakers. Toles O’Laughlin rattles off a “laundry list” of climate-related threats facing Maryland communities, including mosquito-born disease, truck traffic, and high heat. All of them also have health consequences.

“We as a human species are impacting the environment,” says Miriam Rotkin-Ellman, a senior scientist with the Natural Resources Defense Council. “Those conditions can and do impact our health — particularly for children or our most vulnerable populations.”

The Senate bill technically bars insurers from discriminating against patients with preexisting conditions. However, it makes it possible for states to allow insurers to offer plans that don’t cover “essential health benefits” — which can include everything from hospitalization to prescription drugs, maternity care to emergency health services. Denying those benefits to front-line communities that have high rates of asthma, heart disease, or cancer, could make it impossible for people to manage chronic illnesses.

“You can’t avoid exposure if you’re constantly being exposed to something as a basic tenet of your life,” says Toles O’Laughlin.

Making insurance harder for low-income communities to access has the potential to reinforce the economic status quo. Medical expenses account for the largest percentage of personal bankruptcies in the United States — and experts suggest that Obamacare played a role in fewer people going broke.

“With health goes wealth,” says Amy Kyle, an environmental health research scientist at University of California, Berkeley. “The more people can maintain their health, the better they are able to maintain their ability to go to school, get jobs, et cetera.”

The deficit savings some Republicans are harping on aren’t the only economic calculation to factor into the healthcare equation. Everyone will bear some financial burden if Congress decides to roll back preventative care, especially for low-income Americans. More people will likely seek treatment in emergency rooms, for example. That will lead hospitals to charge more for everyone since many ER visitors can’t foot their bills.

“Emergency room care is not cheap,” says Balmes. “Having access to primary care is a major benefit both for the people who live in fence-line communities and for society as a whole.”

Until senators return from recess on July 10, the fate of the Senate bill will likely remain murky. McConnell is currently trying to cobble together a version that will win enough Republican support to pass a bill. He’s sent two revised versions to the CBO to be scored.

Meanwhile, Melissa Mays is holding out hope that her family will still have access to the critical health care it needs.

“The current path they’re on is just reiterating that human lives don’t matter at all, only corporate dollars,” she says of the Republican efforts to upend the ACA. “They should be ashamed of themselves.”