Last month, as a wildfire roared through the foothills above Santa Barbara, California, disaster-weary residents knew the drill and prepared for the worst. Some evacuated, while others sheltered in place, tracking news reports on wind patterns and the progress of firefighters battling the blaze known as the Cave Fire.

By the second day, the Santa Barbara County Public Health Department and the county’s Air Pollution Control District had issued an air-quality warning, and local libraries and nonprofits urged residents to protect themselves from the harmful smoke and ash, offering free N95 respirator masks. Yet most residents rushing through crammed grocery store parking lots and streets during the pre-Thanksgiving rush weren’t heeding the warnings to wear the masks.

As changing weather patterns driven by global warming have extended California’s wildfire season and increased the intensity and size of the infernos burning across the state, residents who don’t take precautions do so at their own peril. New research is revealing the lasting effects of exposure to the tiny particulate matter in smoke — which includes soot, dust, and even lead that fires might be re-releasing into the atmosphere.

According to Emily Williams, a Ph.D. candidate at the University of California, Santa Barbara, who specializes in climate science, social science, policy and the law, the climate change effects that California has experienced so far are just the tip of what’s to come. She’s compiled a fact sheet with Leah Stokes, a UCSB political science professor, to help citizens and the news media connect the dots between climate change and wildfires. The statistics they quote are eye-opening: Researchers found, for example, that in the American West, “climate change has increased the risk of fire weather fivefold and has doubled how much land has burned.”

“If you look at projections, with the rate that we’re going, these fires are peanuts,” Williams said. “They’re nothing compared to the sort of infernos that we can have.”

That increase in wildfires is concerning for Mary Prunicki, an asthma researcher at Stanford University who is studying the long-term health effects of wildfire pollution on people in the Bay Area. Earlier this year, Prunicki and her colleague Kari Nadeau released the findings from a study examining the health impact of pollutants from wildfires versus controlled fires. Their findings suggest that wildfires are more detrimental to human health than controlled fires, which are planned and purposely set under certain weather conditions to help maintain the health of forests. 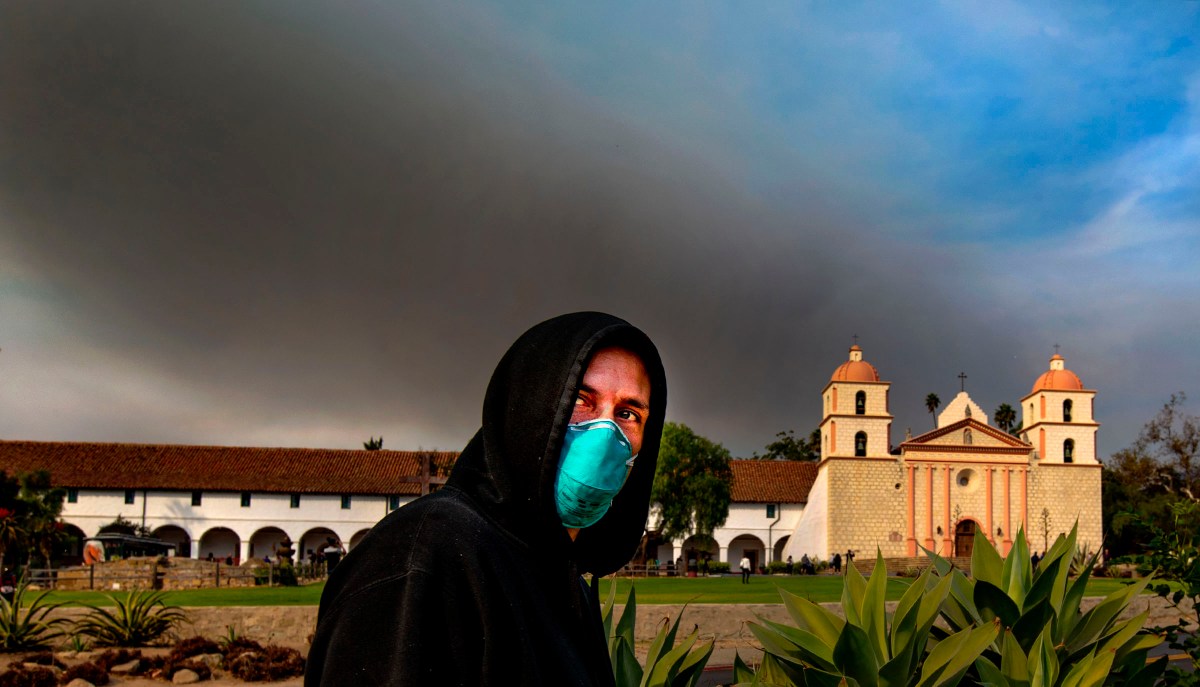 Her current research will look at the individual components of wildfire particulate matter and assess the health effects of exposure to each. Particulate matter is made up of particles of smoke, soot and dust, as well as what Prunicki called “hitchhiker toxins,” such as lead. Particulate matter will vary based on the type of fire and what’s being burned, she explained. PM2.5 — meaning particles with a diameter less than 2.5 micrometers, a twentieth the width of a human hair — is especially dangerous because it can make its way into a person’s lungs and bloodstream.

“If lead or any other toxic hitchhiker is on that PM2.5 or comprises a majority of it,” Prunicki said, “that is now going to be circulated through your body.”

Lead can get into particulate matter when a fire burns forest trees or other plants that have taken it up after it was released into the air or deposited in the soil, usually as a result of decades-old car emissions or industrial processes.

A decade ago, University of California, Santa Cruz Professor Russell Flegal, who specializes in environmental toxicology, and his graduate student Kingsley Odigie, were the first to confirm that fires were reintroducing lead into the atmosphere. Flegal’s mentor, Clair Patterson, had in the 1960s pioneered techniques to measure lead levels, and discovered that additives in gasoline had contributed significantly to the rise in atmospheric lead levels around the world. Leaded gasoline for automobiles was introduced in the 1920s. By mid-century, as the U.S. highway system expanded, more cars hit the roads, leading to massive amounts of leaded emissions. Those lead particles settled in soil throughout California, particularly in densely trafficked urban centers like Los Angeles, but also in relatively pristine environments such as Santa Barbara.

Concerned with the climate change models that predicted that forest fires would increase in severity and frequency, Flegal decided to research whether lead was going back into the atmosphere. Flegal and Odigie studied ash samples from Santa Barbara’s 2009 Jesusita Fire, which burned nearly 9,000 acres, and they confirmed in their 2011 study that small amounts of lead sequestered in vegetation had been remobilized into the environment. Their subsequent work on forest fires releasing captured lead back into the atmosphere in Los Angeles, Chile, Africa, and Australia confirmed the ir original findings.

Howard Mielke of Tulane University’s School of Medicine, one of the nation’s leading experts on lead soil contamination, told Grist that although he hasn’t seen any long-term studies examining the health effects of wildfires re-releasing lead, what’s known about how lead particles in surface soil are picked up by the wind indicates that this air is not safe to breathe.

Further research is needed to clarify what amount of lead is being aerosolized by wildfires, but it would be sensible to use a dust mask to avoid breathing that air, said Mielke, who praised the Flegal and Odigie work as “tremendous.”

When it comes to lead exposure, those most at risk are children because of the neurotoxic effects the metal has on the developing brain. But research has shown that a wider swath of the population is also vulnerable, Flegal noted, including women of child-bearing age and older people whose bones are losing calcium due to osteoporosis.

Shielding the public from the pollutants released during wildfires can be challenging, especially when it comes to protecting populations who work outdoors — one of the groups most at risk for breathing wildfire smoke. In California, farmworkers comprise a significant segment of that workforce, with more than 250,000 migrant and seasonal farmworkers across the state, according to the state’s Employment Development Department website. 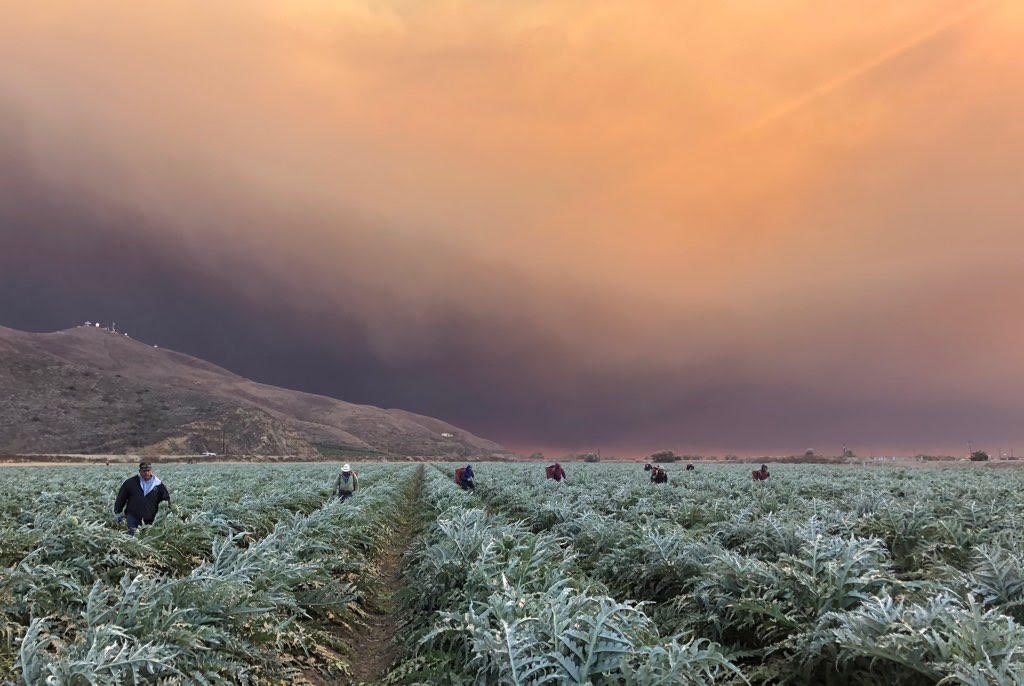 In an artichoke field outside of Camarillo, California, farmworkers labor without respiratory masks during the 2018 Woolsey Fire, which burned nearly 97,000 acres over the course of nearly two weeks. Courtesy of CAUSE

As the Central Coast Alliance United for a Sustainable Economy, or CAUSE, discovered during the 2017 Thomas Fire along the Central Coast, ensuring that workers are protected goes beyond simply raising awareness about the risks of smoke inhalation. The blaze was one of the largest in California history, and the flames raged for weeks, putting farmworkers in Ventura County, where the fire started, in a difficult position: They are often only paid, say, by the crate of strawberries or box artichokes, no matter the weather — so skipping work is not an option for most workers.

“There were thousands of workers out, still working in the fields, often without any kind of protective masks during the worst of the air quality,” said Lucas Zucker,

the policy and communications director at CAUSE, which advocates on behalf of immigrant, indigenous, and undocumented communities throughout Ventura and Santa Barbara counties.

A coalition of statewide organizations, including CAUSE lobbied for an emergency regulation that went into effect earlier this year. The regulation requires employers to distribute N95 respirator masks to workers exposed to wildfire smoke or when air-quality index-levels for PM2.5 particulate matter are designated as “unhealthy.” The N95 respirator is designed to filter and block at least 95 percent of airborne particles, according to the U.S. Food and Drug Administration.

CAUSE saw improvements in the fields during the 2019 wildfire season with the use of masks, but Zucker said issues remain. Enforcing the use of masks requires monitoring by the state, for example. And Zucker said he doesn’t see any evidence of enforcement in the fields. And despite awareness campaigns, farmworkers continue to work during fires without the masks.

“A lot of farmworkers are very used to working in very difficult dangerous conditions already — they’re exposed to dust and pesticides,” Zucker said. “So most farmworkers in our area will wear bandanas over their face to protect from that.”

Other issues like language barriers and fear of retaliation prevent workers from reporting violations tied to this regulation, he explained. But one of the primary reasons many workers are driven to work through wildfires is out of economic necessity.

“That would be, to us, the gold standard — because at end of day these kind of workplace safety protections are really only going to get us half of the way,” Zucker said. “They’re not going to work effectively unless on the other side you have an economic safety net for people.”

However, according to Stanford’s Prunicki, without more research on the hazards of wildfire smoke, there are no concrete recommendations backed up by data that experts can say are effective for protecting people. Luckily for Santa Barbara residents, the county Air Pollution Control District cancelled its air-quality warning on the third day of the fire as containment improved and rainy conditions helped wash away ash. But the agency warned residents that winds and car traffic could re-release ash into the air, creating pockets of unhealthy particle concentrations.

“One thing we like to say is: There is no safe distance from a wildfire because we know that the smoke can travel hundreds of miles, and in that smoke is that particulate matter that we want to avoid,” she explained.