In the middle of last night, Berta Cáceres, leader of the indigenous environmental activist group National Council of Popular and Indigenous Organizations of Honduras (COPINH) and winner of the 2015 Goldman Environmental Prize, was assassinated in her home.

Perhaps that sentence does not mean much to you on its own — after all it’s just a sentence, about a woman you’ve never met, in a country you’ve likely never been to, fighting for something you understand in theory but do not relate to. Berta Cáceres — like many, many other indigenous women — was an environmental activist because if she were not, her community would be utterly destroyed. Cáceres led grassroots campaigns against hydroelectric dams on lands belonging to her people, the Lenca; most prominently the proposed Agua Zarca project in Río Blanco. Her work pushed the largest dam builder in the world, Chinese company SINOHYDRO, to withdraw from the project.

Perhaps that, too, does not carry much weight. Let me reword: This dam threatens to force people off of lands that they have called home for millennia. And, in fighting against it, they are subject to very real danger.

According to Global Witness, 101 environmental activists were murdered between 2010 and 2014 in Honduras alone, and 40 percent of those were indigenous. (For perspective: Approximately 16 percent of the Honduran population is indigenous and Afro-descendant.)

From an Ensia report on violence against environmental activists worldwide:

“Many of those murdered were ‘accidental’ human rights defenders,” says John Knox, a professor of international law at Wake Forest University and independent expert on human rights and the environment of the United Nations Human Rights Council. “They got involved because it was their own land, their own forests, their own water they were defending.”

As a result, Cáceres has been subject to death threats from those with interests in the hydroelectric project, including agents of DESA, the Honduran energy company — to the extent that she was granted a degree of protection by the InterAmerican Commission for Human Rights — and last night, tragically, her enemies made good on those threats.

When we talk about how indigenous women are on the front lines of climate change, this is a striking example: A woman murdered in the so-called safety of her home for fighting for her people’s right to their land, at a time when communities all over the world are losing their grip on their land, thanks to rising tides and more unpredictable disasters. 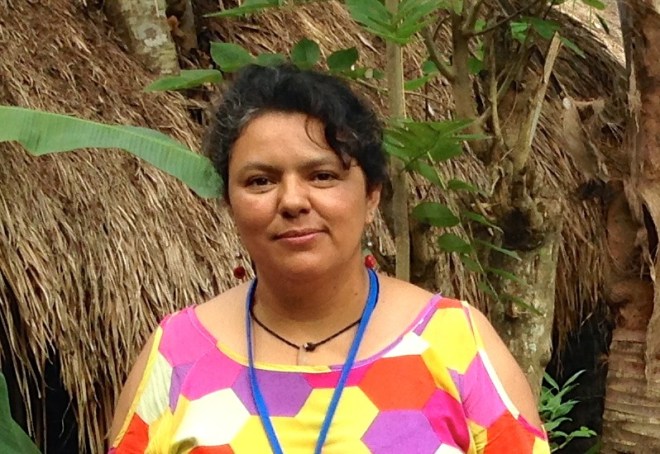 In 2014, I had the honor of interviewing Cáceres about the unique challenges that indigenous women face in battling climate change, and she said something that has stuck with me since (translated from Spanish):

“I am absolutely convinced that if I were a man, this level of aggression wouldn’t be so violent. There are always campaigns against leaders. [But] as women we’re not only leading campaigns like the fight against this hydroelectric project, but also against … the whole militarization culture that’s involved in our defense of the public good of nature. We are women who are reclaiming our right to the sovereignty of our bodies and thoughts and political beliefs, to our cultural and spiritual rights — of course the aggression is much greater.”

In speaking with Cáceres, I almost couldn’t believe that she was receiving such threats — who would want to kill a woman so kind, so strong, so obviously good? Well, she triumphantly stood in the way of a corporation that sought to profit off her land, and that was enough.

Cáceres’ death is an incredible tragedy, because the world is minus one person who brought tangible light into it. It also calls attention to the fact that those who fall under the impossibly vague, much-maligned umbrella of “environmental activists” face danger that most of us cannot fathom.

So, at the very least, remember this next time you hear about land rights, or climate change, or violence against women: It is a much darker and more dangerous fight than we can often imagine — to the direct detriment of those fighting it.